In a first-of-its-kind study comparing human walking and running motions – and whether the hips, knees or ankles are the most important power sources for these motions – researchers at North Carolina State University show that the hips generate more of the power when people walk, but the ankles generate more of the power when humans run. Knees provide approximately one-fifth or less of walking or running power.

The research could help inform the best ways of building assistive or prosthetic devices for humans, or constructing next-generation robotics, say NC State biomedical engineers Drs. Dominic Farris and Gregory Sawicki. The co-authors of a study on the mechanics of walking and running in the journal Interface, a Royal Society scientific journal, Sawicki and Farris are part of NC State’s Human PoWeR (Physiology of Wearable Robotics) Lab.

A long history of previous studies have focused on the biomechanics of human locomotion from a whole-body or individual limbs perspective. But this study is the first to zoom in on the mechanical power generated by specific lower-limb joints in a single comprehensive study of walking and running across a range of speeds, Sawicki says. 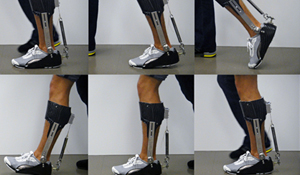 New NC State research shows that hips provide more power when humans walk, while ankles do more of the work when people run. The findings could help engineers design better assistive devices like this one, which helps put a spring in the step of stroke victims or other impaired walkers. Photo by M. Bruce Wiggin.

The study shows that, overall, hips generate more power when people walk. That is, until humans get to the point at which they’re speed walking – walking so fast that it feels more comfortable to run – at 2 meters per second. Hips generate 44 percent of the power when people walk at a rate of 2 meters per second, with ankles contributing 39 percent of the power.

When people start running at this 2-meter-per-second rate, the ankles really kick in, providing 47 percent of the power compared to 32 percent for the hips. Ankles continue to provide the most power of the three lower limb joints as running speeds increase, although the hips begin closing the distance at faster speeds.

“There seems to be a tradeoff in power generation from hips to ankles as you make the transition from walking to running,” Sawicki says.

Both researchers are interested in how the study can help people who need assistance walking and running. Knowing which part of the lower limbs provide more power during the different activities can help engineers figure out how, depending on the person’s speed and gait, mechanical power needs to be distributed.

“For example, assistive devices such as an exoskeleton or prosthesis may have motors near both the hip and ankle. If a person will be walking and then running, you’d need to redistribute energy from the hip to the ankle when the person makes that transition,” Farris says.

Ten people walked and ran at various speeds on a specially designed treadmill in the study; a number of cameras captured their gait by tracking reflective markers attached to various parts of the participants’ lower limbs while the treadmill captured data from the applied force.

The joint Department of Biomedical Engineering is part of NC State’s College of Engineering and the University of North Carolina-Chapel Hill’s School of Medicine.