Wildlife face many threats with spreading urbanization, including habitat loss and inbreeding when populations become fragmented and isolated. It doesn’t help that there is a billion-dollar international industry dedicated to the illegal trafficking of wild animals or wild animal parts.

The Conservation Genetics Lab at the University of Arizona is working to conserve and protect wild animals around the world.

“Our work here deals with using genetics for wildlife conservation,” said Ashwin Naidu, a doctoral candidate in the School of Natural Resources and the Environment.

One of the largest threats to wildlife is loss of genetic diversity through inbreeding, which can lead to lower levels of reproductive fitness or disease susceptibility and can endanger a population’s survival. 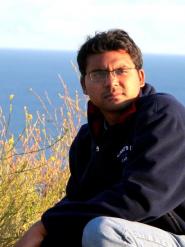 Doctoral candidate Ashwin Naidu has a dream to start a forensics lab that will work towards conservation of endangered wild animals and help to fight against wildlife crime. Photo courtesy of Ashwin Naidu

As urbanization increases, more and more wildlife habitats are destroyed, leaving populations of wild species cut off from each other, marooned on isolated “islands” of natural land in a sea of human development. Small populations that become trapped in these fragmented habitats are unable to breed outside of their local gene pool – and the Conservation Genetics Lab steps in to help.

The researchers use genetic techniques to identify whether small populations of wild animals that have become isolated because of habitat fragmentation are inbred or in danger of becoming inbred.

The researchers extract DNA from animal samples such as hair, bones or carcasses, or blood samples and cheek swabs if the animal is captured.

“We amplify DNA to look for certain areas in the genome,” said Naidu. “Every species has a unique DNA sequence known as a DNA barcode and every individual has a unique genetic fingerprint.”

There are several specific locations on a genome where the order of genes or base-pair sequences varies between individuals, populations or species, said Naidu. “One is the nuclear DNA, DNA contained inside the cell’s nucleus. Another is mitochondrial DNA, or DNA located inside the mitochondria of the cell.”

DNA fingerprints and barcodes from individual samples then are compared with a genetic database of species and populations that previously have been studied.

If a population is found to have inbred, the Conservation Genetics Lab goes to the rescue. 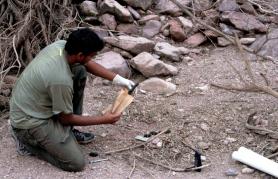 There are 2 scientific terms for feces: "scat" if it came from a carnivore and "dung" if it came from an herbivore. Naidu will extract DNA for analysis from scat samples he collects in the field. Photo courtesy of Ashwin Naidu

“We observe and monitor these populations to see if they’re doing well. Then we genetically test them again to find out the level of genetic diversity after the translocation. Has it balanced, is it good enough for their survival? If it’s not, then we need more translocations.”

The same technique is applied to endangered or critically endangered animals that require captive breeding. Animals that are bred in captivity for good genetic diversity can be reintroduced to the wild to genetically rescue the wild population.

Genetics also can be used to identify species in areas where they previously haven’t been known to exist. “Sometimes we find samples of an animal, such as feces, carcasses, bones or hair, and this is evidence for presence of the animal. But how do you confirm what species of animal it is? Genetics is a very useful tool for identifying the species,” said Naidu. “DNA evidence can be obtained from ancient sources as well, such as fossils or bones which are being excavated.”

And wildlife forensic genetics has yet another application: catching criminals. 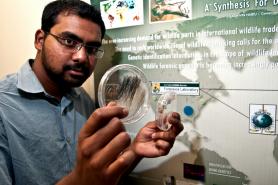 As with human crime cases, genetic material can be extracted from samples of wild animals such as hair, bone or feces. At the Conservation Genetics Lab, Ashwin Naidu analyzes DNA from samples of hair and bone to identify information such as the species, sex, place of origin or sometimes even the individual animal involved a case of wildlife crime. Photo by Patrick McArdle/UANews

Forensic genetics can be used to identify the victims and criminals in wildlife crime cases in the same way that genetics is used to solve human crime cases. The Conservation Genetics Lab along with state and federal wildlife management agencies work to fight against cases of wildlife crime.

“Wildlife forensics particularly deals with investigating crime cases where you have a shipment of animals or animal parts that have been transported internationally and are seized by officials at the border, or later are identified as not being native to the country they are found in,” said Naidu. “How would you know which country or which region these animal parts or animals came from? Wildlife forensic genetics is really kicking in because of all this new technology that’s available for species identification and source population identification.”

Forensic genetics can answer questions such as the species, origin and source population of the animal or animal part, as well as identify whether it was bred in captivity or caught in the wild. “All of these are general questions when you look at samples such as meat, hides, burnt skin or other morphologically unidentifiable samples where you need to extract DNA and identify them genetically,” said Naidu.

The lab also deals with specific cases of wildlife crime.

“Let’s say a hunter has a license to shoot one species, but he has shot another species and claims that this is what he had a hunting license for,” said Naidu. “But a wildlife manager sees a little bit of blood or some hair or remains from the animal in the bed of the hunter’s vehicle and wants to know exactly what species it is and which population it belonged to. So he collects some samples from the back of the truck and sends them to the lab and we identify species or individuals to determine whether it is really the species the hunter had a license for.”

Once evidence is obtained showing that a hunter illegally has taken a species, the evidence may be presented in court. “These results are so scientifically robust that they are just like human DNA court cases,” said Naidu. “There are a lot of cases in illegal or in wildlife crime that need good scientists to go and testify in courts and I think that’s a very important move that needs to be made by scientists for the benefit of wildlife conservation in this world.”

“My dream is to establish a lab and a forensic unit that will focus particularly on wildlife forensic genetics dealing with collection of field evidence, chain of custody and presentation of evidence to testify in court. This lab would operate on global standards and allow for communication between other such labs,” said Naidu.

Naidu’s research is funded by the U.S. Fish and Wildlife Service and the Arizona Game and Fish Department. He is also associated with the International Union for Conservation of Nature’s Cat Specialist Group.