The rapid melting of Greenland glaciers is captured in the documentary “Chasing Ice.” The retreat of the ice edge from one year to the next sends more water into the sea.

Now University of Washington atmospheric scientists have estimated that up to half of the recent warming in Greenland and surrounding areas may be due to climate variations that originate in the tropical Pacific and are not connected with the overall warming of the planet. Still, at least half the warming remains attributable to global warming caused by rising carbon dioxide emissions. The paper is published May 8 in Nature.

Greenland and parts of neighboring Canada have experienced some of the most extreme warming since 1979, at a rate of about 1 degree Celsius per decade, or several times the global average.

“We need to understand why in the last 30 years global warming is not uniform,” said first author Qinghua Ding, a UW research scientist in atmospheric sciences. “Superimposed on this global average warming are some regional features that need to be explained.” 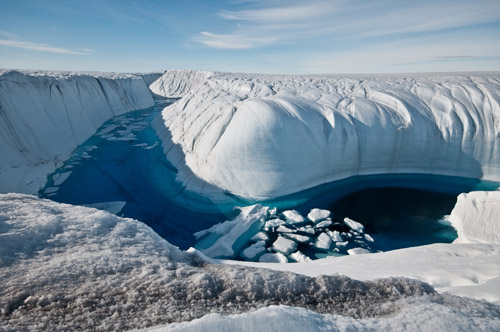 The study used observations and advanced computer models to show that a warmer western tropical Pacific Ocean has caused atmospheric changes over the North Atlantic that have warmed the surface by about a half-degree per decade since 1979.

“The pattern of the changes in the tropical Pacific that are responsible for remarkable atmospheric circulation changes and warming in Greenland and the Canadian Arctic are consistent with what we would call natural variability,” said co-author David Battisti, a UW professor of atmospheric sciences.

Researchers say it’s not surprising to find the imprint of natural variability in an area famous for its melting ice. In many of the fastest-warming areas on Earth, global warming and natural variations both contribute to create a “perfect storm” for warming, said co-author John “Mike” Wallace, a UW professor of atmospheric sciences.

The natural variations in the new study related to an unusually warm western tropical Pacific, near Papua New Guinea. Since the mid-1990s the water surface there has been about 0.3 degrees hotter than normal. Computer models show this affects the regional air pressure, setting off a stationary wave in the atmosphere that arcs in a great circle from the tropical Pacific toward Greenland before turning back over the Atlantic.

In previous studies, Wallace and Battisti have documented the existence of decades-long climate variations in the Pacific Ocean that resemble the well-known shorter-range El Niño variations.

This particular location in the tropical Pacific may be a sweet spot for generating global atmospheric waves. A series of studies led by co-author Eric Steig, a UW professor of Earth and space sciences, working with Ding and Battisti, showed that waves starting in the same place but radiating southward are warming West Antarctica and melting the Pine Island Glacier.

Researchers can’t say for how long the tropical Pacific will remain in this state.

“Nothing we have found challenges the idea that globally, glaciers are retreating,” Battisti said. “We looked at this place because the warming there is really remarkable. Our findings help us to understand on a regional scale how much of what you see is human-induced by the buildup of CO2, and how much of it is natural variability.”

“There’s nothing in this paper that negates the message in the movie,” Wallace said. “Ice appears to be exquisitely sensitive to the buildup of greenhouse gases, more than we ever would have thought.” Natural variations could either accelerate or decelerate the melting rate of Greenland’s glaciers in coming decades, he said, but “in the long run, the human-induced component is likely to prevail.”