WARSAW, Poland – July 6, 2010 – Just weeks after catching a World Cup soccer game in their home country, two students from South Africa brought 40,000 football fans with them to Warsaw, Poland, for the “World Cup of technology.”

Virtual fans, that is.

Team Simulacrum’s entry into the Imagine Cup 2010 Worldwide Finals models and analyzes the way fans exit games like those being played at the World Cup in South Africa. Simulacrum’s software aims to pinpoint where bottlenecks occur in a stadium and to help prevent stampedes after real world games.

The South African students submitted the crowd behavior modeling project to this year’s Imagine Cup competition in honor of their country hosting the 2010 World Cup. Since the event was wrapping up at the same time as the Microsoft-sponsored Imagine Cup, they decided to bring a little bit of soccer’s biggest tournament to Warsaw with them. 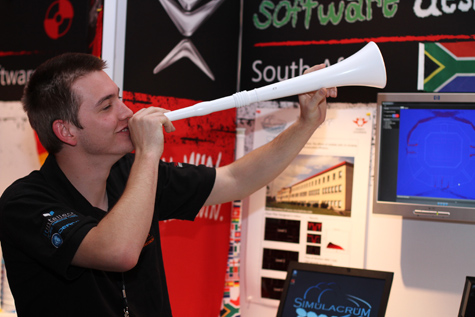 About the image above: In addition to a football-themed software project, South Africa’s Team Simulacrum brought a bit of the World Cup to the Imagine Cup through the vuvuzela, the plastic horn that’s been blaring in South Africa’s stadiums and streets. Image credit: Microsoft

The team from South Africa this week pitted their project against other top technology students gathered here for the eighth Imagine Cup. While the World Cup pits the world’s top 32 soccer teams against each other, the Microsoft-sponsored Imagine Cup invites 400 of the best technology students from around the world to compete in categories like software design, embedded development, and game design.

It’s hard to miss the parallels between the two global contests, said Jon Perera, Microsoft’s general manager of education strategy. “Just as the eyes of the football world are turned toward the World Cup, the eyes of the technology world are turned here, to the World Cup of technology,” he told students during the Imagine Cup opening ceremony on Saturday, July 3. “The Imagine Cup takes the best of the best and brings them together in one competition, and on this stage the world can see the amazing work these students are doing.”

Since the competition started, students have been juggling competing with trying to watch their home countries compete in the World Cup. The recent quarterfinals matches were shown on a big-screen television in the hotel bar, which was packed with students and judges from around the world decked out in the jerseys and colors of their home countries.

At halftime during the Germany-Argentina game, a happy group of Germans chatted away about their team’s performance. The biggest football fan on Team Mediator, which was competing in the software design category for Germany, said he liked being able to watch World Cup action with his fellow competitors.

“We knew that the World Cup would collide with the Imagine Cup,” said Christian Piechnick. “In Germany, we would just watch the games with other university students. The awesome thing about the Imagine Cup is that people from around the world are here to watch World Cup games and do the software competition.” 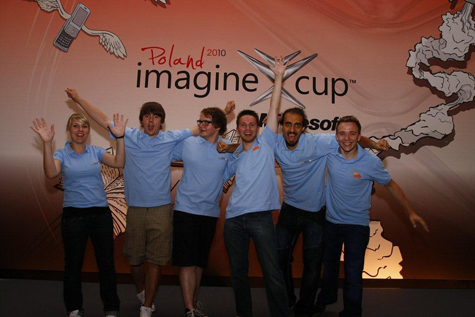 About the image above: The students representing Germany have been cheering on their country’s run in the World Cup from Warsaw. “The awesome thing about the Imagine Cup is that people from around the world are here to watch World Cup games and do the software competition,” said Christian Piechnick (second from left). Image credit: Microsoft

The cultural mash-up on display in the hotel bar perhaps mirrored the scenes in South Africa’s stadiums. “The Imagine Cup feels like the World Cup or the Olympics,” said Ignatius Lopez, a judge from Argentina decked out in in a white and blue striped Argentinian football jersey. “There’s lots of cultural exchange going on. It’s a competition, but it becomes friendly, similar to the World Cup.”

As the Imagine Cup competition progressed, students were trying to remind themselves of that fact as they waited to find out if their team would advance to the next rounds. To get to Warsaw, finalists had to beat their rivals in regional and national events around the world over the past few months. More than 325,000 high school, college, and university students in 113 countries and regions entered the competition. The 400 students who made it to Poland were therefore the best of the best.

“We know it’s a very difficult competition, and all the teams are very good,” said Stefan Lia, from Malta’s Team Dice. “We’re trying not to think about it. At the end of it, we’re here to learn from others. Both the World Cup and the Imagine Cup try to bring the fun factor into competing. It’s not just about competing but participating and making friends. Both the Imagine Cup and the World Cup do that very well.”

Lia said he had originally been rooting for England in the World Cup, but he fell into Holland’s camp after he saw them beat Brazil. Later that evening, the team from the Netherlands was seen wearing orange in honor of their team, which advanced to the semi-finals after beating powerhouse Brazil. “It’s cool to meet people from countries still competing in the World Cup,” said Daniella Bal, from Team wEarth-IT from Holland. Her twin sister, Malissa, agreed, though she admitted only following soccer during the World Cup. 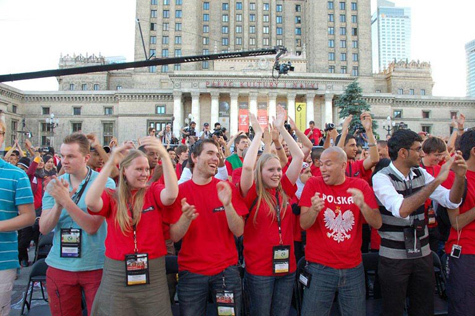 About the image above: Daniella Bal (left), Jasper Baljeu, and Malissa Bal of the Netherland’s wEarth-IT team have been enjoying the Imagine Cup competition as well as their country’s performance in the World Cup. “Of course we want to win,” Baljeu said. “But we won’t consider it a failure if we don’t.” Image credit: Microsoft

Teammate Jasper Baljeu said that the Imagine Cup competition was just as intense as the World Cup. “Of course we want to win, but we won’t consider it a failure if we don’t,” he said. It wasn’t immediately clear if he was taking about his Imagine Cup team, or his country’s soccer team, which as of today was still alive in the World Cup.

The Imagine Cup, which ends Thursday, will end just before Sunday’s World Cup title game. In the meantime, student competitors are keeping an eye on South Africa as they watch their fellow competitors advance (or get knocked out) in the technology finals. Some of them also got to see Team Simulacrum give a virtual glimpse of Johannesburg’s Royal Bafokeng Stadium, site of several World Cup matches.

And if they were lucky (or unlucky, as the case may be), they also may have seen (and heard) the team blow into two vuvuzelas, the plastic horns that have been constantly blaring in South Africa’s stadiums and streets during the course of the World Cup tournament. There are two camps on the vuvuzelas, the South African team said – people who love them and the people who hate them. “If you’re blowing one, they’re a lot of fun,” Ekron said. “If not, they can be the worst thing in the world.”