Scientists with the Lawrence Berkeley National Laboratory (Berkeley Lab) and the University of California (UC) Berkeley have directed the first self-assembly of nanoparticles into device-ready materials. Through a relatively easy and inexpensive technique based on blending nanoparticles with block co-polymer supramolecules, the researchers produced multiple-layers of thin films from highly ordered one-, two- and three-dimensional arrays of gold nanoparticles. Thin films such as these have potential applications for a wide range of fields, including computer memory storage, energy harvesting, energy storage, remote-sensing, catalysis, light management and the emerging new field of plasmonics.

“We’ve demonstrated a simple yet versatile supramolecular approach to control the 3-D spatial organization of nanoparticles with single particle precision over macroscopic distances in thin films,” says polymer scientist Ting Xu, who led this research. “While the thin gold films we made were wafer-sized, the technique can easily produce much larger films, and it can be used on nanoparticles of many other materials besides gold.” 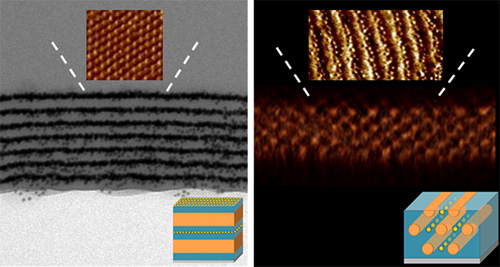 Berkeley Lab researchers have developed a relatively simple and inexpensive technique for directing the self-assembly of nanoparticles into device-ready thin films with microdomains of lamellar (left) or cylindrical morphologies. (Image courtesy of Ting Xu group)

Nanoparticles can be thought of as artificial atoms with unique optical, electrical and mechanical properties. If nanoparticles can be coaxed into routinely assembling themselves into complex structures and hierarchical patterns, similar to what nature does with proteins, devices a thousand times smaller than those of today’s microtechnologies could be mass-produced.

Xu and her research group have been advancing towards this goal for the past decade. In a study earlier this year, they were able to induce rod-shaped semiconductor nanocrystals to self-assemble into one-, two- and even three-dimensional macroscopic structures. With this latest application of their methods to thin films, they have moved into the realm of material forms that are required for device fabrication and are well-suited for scalable nanomanufacturing.

“This is the first time that 2-D nanoparticle assembly, similar to those obtained using DNA linkers and controlled solvent evaporation, can be clearly achieved in multi-layers in supramolecule-based nanocomposite thin films,” Xu says. “Our supramolecular approach does not require chemical modification to any of the components in the composite system and, in addition to providing a means of building nanoparticle-based devices, should also provide a powerful platform for studying nanoparticle structure-property correlations.”

The technique developed by Xu and her colleagues uses solutions of block co-polymer supramolecules to direct the self-assembly of nanoparticles. A supramolecule is a group of molecules that act as a single molecule able to perform a specific set of functions. Block copolymers are long sequences or “blocks” of one type of monomer bound to blocks of another type of monomer that have an innate ability to self-assemble into well-defined arrays of nano-sized structures over macroscopic distances.

“Block copolymer supramolecules self-assemble and form a wide range of morphologies that feature microdomains typically a few to tens of nanometers in size,” Xu says. “As their size is comparable to that of nanoparticles, the microdomains of block copolymer supramolecules provide an ideal structural framework for the co-self-assembly of nanoparticles.” 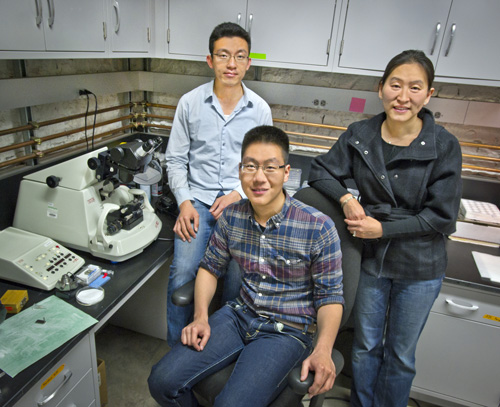 In this latest study, Xu and her colleagues incorporated gold nanoparticles into solutions of block co-polymer supramolecules to form films that ranged in thickness between 100 to 200 nanometers. The nanocomposite films featured microdomains in one of two common morphologies – lamellar or cylindrical. For the lamellar microdomains, the nanoparticles formed hexagonally-packed 2-D sheets that were stacked into multiple layers parallel to the surface. For the cylindrical microdomains, the nanoparticles formed 1-D chains (single particle width) that were packed into distorted hexagonal lattices in parallel orientation with the surface.

The inter-particle distance between gold nanoparticles in the 1-D chains and the 2-D sheets was 8 to 10 nanometers, which raises intriguing possibilities with regards to plasmonics, the phenomenon by which a beam of light is confined in ultra-cramped spaces. Plasmonic technology holds great promise for superfast computers and optical microscopy, among other applications. However, a major challenge for developing plasmonics has been the difficulty of fabricating metamaterials with noble metal nanoparticles such as gold.

“Our gold thin films display strong plasmonic coupling along the inter-particle spacing in the 1-D chains and 2-D sheets respectively,” Xu says. “We should therefore be able to use these films to investigate unique plasmonic properties for next-generation electronic and photonic devices. Our supramolecular technique might also be used to fabricate plasmonic metamaterials.”

This research was supported by the U.S. Department of Energy Office of Science.