Shipping lanes through the Arctic Ocean won’t put the Suez and Panama canals out of business anytime soon, but global warming will make these frigid routes much more accessible than ever imagined by melting an unprecedented amount of sea ice during the late summer, new UCLA research shows.

“The development is both exciting from an economic development point of view and worrisome in terms of safety, both for the Arctic environment and for the ships themselves,” said lead researcher Laurence C. Smith, a professor of geography at UCLA. 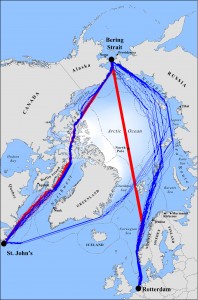 Projected shipping lanes through the Arctic for 2040-59. New Arctic shipping lanes. The fastest navigation routes for ships seeking to cross the Arctic Ocean by mid-century include the Northwest Passage (on the left) and over the North Pole (center), in addition to the Northern Sea Route (on the right). UCLA researchers arrived at these projections by studying sea ice forecasts from seven climate models for the years 2040 to 2059. The projections assume a medium-low increase in carbon emissions and corresponding medium-low rise in global warming. Red lines indicate the fastest available trans-Arctic routes for Polar Class 6 ships (moderate-capability icebreakers such as those used today in the Baltic), and blue lines indicate the fastest available routes for common open-water ships. Where overlap occurs, line weights indicate the number of successful transits following the same route. Dashed lines reflect currently existing sovereignty boundaries. The white backdrop indicates period-averaged sea ice concentration. (Image courtesy of Proceedings of the National Academy of Sciences) (Click image to enlarge)

The findings, which explore accessibility during the Arctic’s most navigable month of the year, September, appear in the latest issue of the scholarly journal Proceedings of the National Academy of Sciences Plus. The first thorough assessment of trans-Arctic shipping potential as global temperatures continue to rise, the study is based on independent climate forecasts for the years 2040 to 2059.

By mid-century, even ordinary shipping vessels will be able to navigate previously inaccessible parts of the Arctic Ocean, and they will not need icebreakers to blaze their path as they do today, the researchers found.

“We’re talking about a future in which open-water vessels will, at least during some years, be able to navigate unescorted through the Arctic, which at the moment is inconceivable,” said co-author Scott R. Stephenson, a Ph.D. candidate in the UCLA Department of Geography.

Just as surprisingly, the Arctic ice sheet is expected to thin to the point that polar icebreakers will be able to navigate between the Pacific and Atlantic oceans by making a straight shot over the North Pole, Smith and Stephenson predict.

“Nobody’s ever talked about shipping over the top of the North Pole,” Smith said. “This is an entirely unexpected possibility.”

Even the fabled and notoriously treacherous Northwest Passage, which traces Canada’s coastline and offers the most direct route from Asia to eastern Canada and the northeasternmost part of the U.S., is expected to become more viable for Polar Class 6 vessels — a common type of ship that has been strengthened against ice — and possibly even ships with unreinforced hulls, which make up the lion’s share of the world’s commercial fleet.

Today, the Northwest Passage is theoretically navigable only one out of seven years, on average, making it too unreliable to be a viable option for commercial shippers, the researchers said. But by mid-century, sea ice will melt in September to the point that it is accessible every other year, on average. Choosing whether to ship through the passage “will become a coin toss,” Smith said.

The predictions, however, do not foresee access beyond late summer. “This will never be a year-round operation,” Smith stressed.

Smith is an authority on the ways in which climate change is affecting the Arctic, where average temperatures have risen faster than the global average since the mid-1980s. He has quantified the disappearance of more than 1,000 Arctic lakes. He also is the author of “The World in 2050: Four Forces Shaping Civilization’s Northern Future,” a 2010 book that looks at new economic opportunities, as well as environmental degradation, taking shape in the northern quarter of the globe. With Stephenson, Smith has calculated the toll global warming will take on Arctic ice roads and the communities and businesses that depend on them.

For centuries, the Arctic Ocean has captured the imagination of explorers because of the possibility it offers for traveling between the Pacific and the Atlantic oceans through the Bering Strait. Until recently, however, sea ice has blocked access to the potential shortcut between Asia and North America or Europe. But in the past two years, the ice has begun to melt in late summer to such an extent that even ordinary seagoing vessels, albeit with escorts, have been able to enter its frigid waters. In summer 2012, a total of 46 voyages successfully crossed the Northern Sea Route. 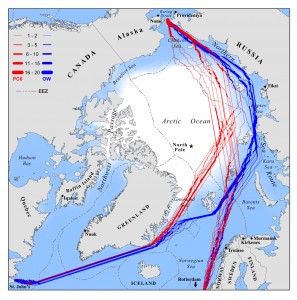 To arrive at their predictions, Smith and Stephenson studied these emerging shipping routes and the degree of ice melt that has made them possible. They then took the results from seven respected forecasts for the sea ice cover in the Arctic and averaged predictions for the extent of the Arctic ice sheet in September, historically the month when the ocean has the least amount of ice coverage, for every year between 2040 and 2059.

“No matter which carbon emission scenario is considered, by mid-century we will have passed a crucial tipping point — sufficiently thin sea ice — enabling moderately capable icebreakers to go where they please,” Smith said.

The mid-century projections may seem distant when measured against the lifespan of adults living today, the researchers concede. But the period falls well within the long lead times of commercial and governmental planning efforts. As such, the projections have implications for port construction, acquisition of natural resources and the establishment of jurisdiction of shipping lanes, Smith and Stephenson stress.

Canada, for instance, has long maintained that the Northwest Passage falls under Canadian sovereignty, while the U.S. maintains it is an international strait. As long as the passage was essentially unnavigable, the issue was moot, but increasing accessibility could bring the U.S. into dispute with its northern neighbor, the researchers warn.

The increasing viability of shipping routes through the Arctic is also likely to increase pressure on the U.S. to ratify the United Nations Convention on the Law of the Sea. Some newly accessible shipping lanes would pass through waters over which the U.S. could make internationally accepted sovereignty claims if it ratified the treaty, the researchers said. Countries that claim sovereignty are able to lay down rules for the vessels that pass through their waters. Russia, which controls the Northern Sea Route, currently requires shipping companies to pay steep fees for escort vessels to accompany their fleets.

The unprecedented new navigation routes that are expected to open up could allow shipping companies to sidestep these escort fees and other Russian regulations, but these new lanes could take Polar Class 6 vessels and even common ships into less-regulated international waters.

While attractive to business, the lack of regulations poses safety, environmental and legal issues that have yet to be resolved, the researchers stress. The prospect of open-water ships entering the Arctic Ocean in late summer heightens the urgency for comprehensive international regulations that provide adequate environmental protections, vessel safety standards and search-and-rescue capability, they said.

“The Arctic is a fragile and dangerous place,” Smith said.