Ghosts are always welcome, when you’re looking for neutrinos

Halloween has come and gone, but Yale physicist Bonnie Fleming still has ghosts in her machine.

On Oct. 15, Fleming and colleagues at the MicroBooNE physics experiment in Illinois detected their first neutrino candidates, which are also known as ghost particles. It represents a milestone for the project, involving years of hard work and a 40-foot-long particle detector that is filled with 170 tons of liquid argon. 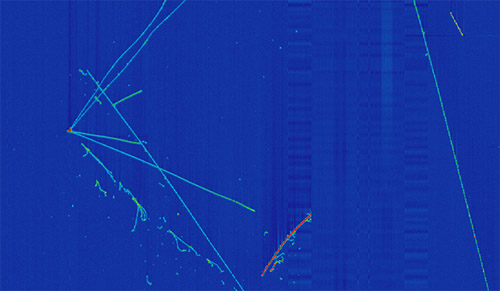 The project announced its progress Nov. 2. MicroBooNE is based at the Fermilab research facility, located just outside of Chicago.

Neutrinos are subatomic particles that carry no electric charge and travel through the universe almost entirely unaffected by natural forces. They are considered a fundamental building block of matter. This year’s Nobel Prize in physics, in fact, was awarded to researchers studying neutrino oscillation.

The MicroBooNE experiment aims to study how neutrinos interact and change within a distance of 500 meters. The detector will help scientists reconstruct the results of neutrino collisions as finely detailed, three-dimensional images. MicroBooNE findings also will be relevant for the forthcoming Deep Underground Neutrino Experiment (DUNE), which will examine neutrino transitions over longer distances.

Liquid argon is crucial to the process. It is 40% more dense than water, and neutrinos are more likely to interact with it. When a neutrino hits the nucleus of an argon atom in the detector, its collision creates a spray of subatomic particle debris. Tracking these particles allows scientists to reveal the type and properties of the neutrino that produced them.

“Future neutrino experiments will use this technology,” said Sam Zeller, MicroBooNE co-spokesperson and a physicist at Fermilab. “We’re learning a lot from this detector. It’s important not just for us, but for the whole physics community.”