COLUMBIA, Mo. — While Americans prepare to cook millions of turkeys for Thanksgiving, a geothermal energy system developed by a University of Missouri engineer will be keeping live turkeys toasty during the chilly autumn weather. In a prototype facility, designed by a University of Missouri engineer, environmentally and economically friendly geothermal energy is keeping turkeys comfortable during both cold and hot weather. The system is designed to reduce utility costs while improving the air quality for the birds.

“This is our first prototype of a geothermal system in a commercial livestock operation,” said Yun-Sheng Xu, associate research professor in civil and environmental engineering. “Our first set of performance data suggests that farmers could cut their heating costs in half at current propane prices. Currently, two units are installed at the test farm. Other farmers could begin installing units on their turkey farms as soon as next year, for use by next winter.” 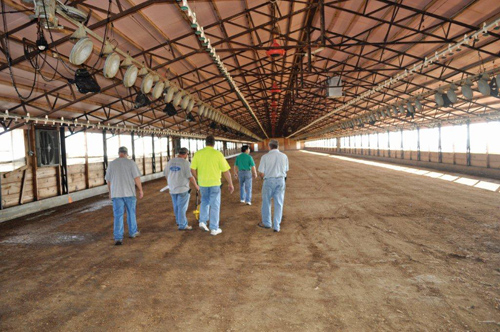 When turkeys are young, they need to be in an environment with the temperature kept at 90 degrees Fahrenheit; this temperature is lowered to 70 degrees F as the birds age. Image credit: University of Missouri

Heating and cooling is important in turkey operations because the temperature in the enclosure must be kept at 90 degrees Fahrenheit while the birds are young, but lowered to 70 degrees F for older birds. Propane fuel for temperature control units can cost farmers tens of thousands of dollars per year. Propane burners in livestock barns also produce humidity and carbon dioxide. This combination can reduce the oxygen in the air and moisten the waste from the fowl, leading to ammonia contamination of the air.

Once a geothermal unit is installed, the operation and maintenance are much lower than operating a fossil-fuel-powered system. Geothermal systems use the constant 55 to 65 degrees F of the soil a few feet beneath the surface to regulate the temperature of a liquid flowing through buried tubing. Xu’s design is an effort to keep installation costs as cheap as possible. In his system, the tubing is buried horizontally, as opposed to other systems that rely on vertically placed tubes, which require expensive deep drilling. 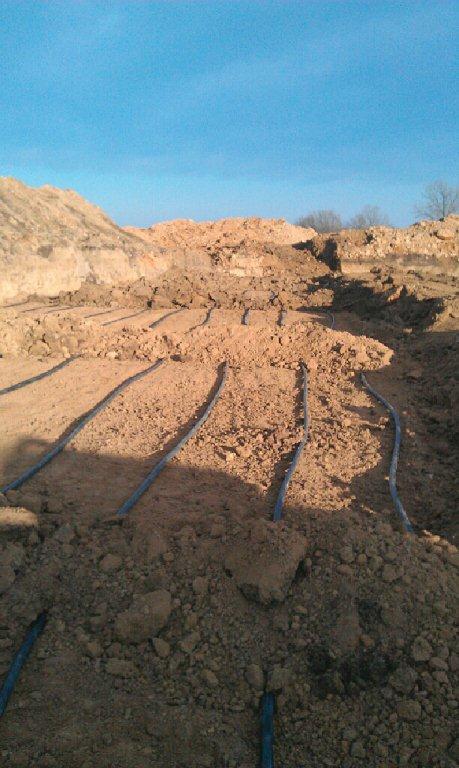 Using the geothermal heating system, a turkey farm can be both more economical and better for the environment than a farm run on fossil fuels. Geothermal energy produces no greenhouse gases and is not dependent on wind or sunlight. In the future, the system will use an artificial wetland above the buried tubes to further insulate them. The wetland provides critical habitat to amphibians, migratory birds and other wildlife.

“Similar systems could be installed in other livestock operations,” Xu said. “It might work better in a chicken house, since they use solid walls as opposed to the curtains used to enclose turkey barns. Pig-and-cattle-rearing facilities could benefit from the inexpensive hot water produced using a geothermal system. The system also could be scaled down to keep a doghouse comfortable in the backyard.” 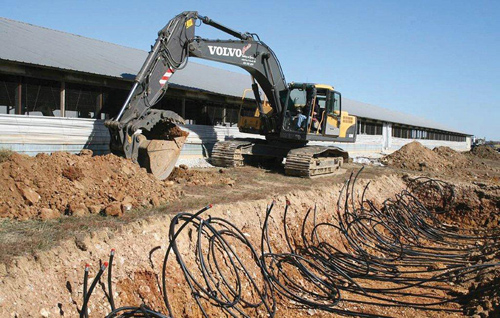 A bulldozer starts the installation of geothermal system for turkey barns. An MU researcher has designed a new geothermal system that could save farmers quite a lot of money. Image credit: University of Missouri