New research suggests that some patients develop a potentially deadly blood infection from their implanted cardiac devices because bacterial cells in their bodies have gene mutations that allow them to stick to the devices.

Geoscientists were the major contributors to the finding.

Proceedings of the National Academy of Sciences published the study results online this week.

“Geobiologists, key to these results, use atomic force microscopy to study the forces with which bacteria adhere to mineral surfaces,” said Enriqueta Barrera, program director in the National Science Foundation’s Division of Earth Sciences, which funded the research.

“These scientists have adapted this approach, along with molecular dynamics simulations, to gain a better understanding of the strength with which the proteins of infectious bacteria adhere to cardiac implants,” said Barrera. “Such results might have implications for the development of medication to treat this type of infection.” 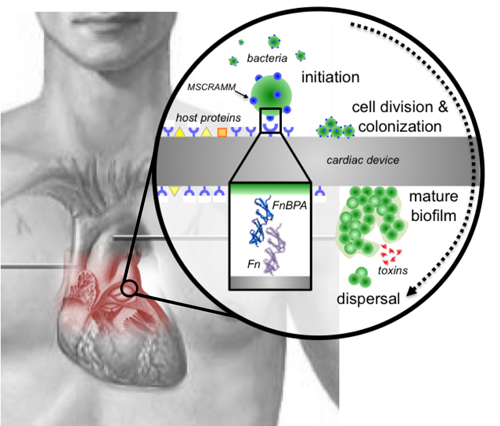 Patients with implants can develop infections because of a biofilm of persistent bacteria on the surfaces of their devices.

A biofilm is a community of bacterial cells that lives on the surface of a solid substrate. Biofilms are the most common mode of life for all bacteria, whether they reside in the environment or in the human body.

The scientific principles governing the formation of bacterial biofilms on cardiac devices are strongly linked with those of biofilm formation on mineral surfaces, hence the connection with geobiology.

Scientists found that some strains of the bacteria, Staphylococcus aureus, have just a few genetic variants in the proteins on their surfaces that make them more likely to form these biofilms.

The research seeks to get to the heart of a medical paradox: devices such as pacemakers, defibrillators and prosthetic cardiac valves save lives, but they cause infections in about 4 percent of the estimated 1 million patients receiving implants each year in the United States.

Because biofilms resist antibiotics, the only treatment is surgery to remove the contaminated device and implant a new one. This adds up to thousands of surgeries and more than $1 billion in health care costs every year.

A team led by scientists at Ohio State University and Duke University Medical Center used atomic force microscopy and powerful computer simulations to determine how Staph bacteria bond to the devices in the process of forming these biofilms.

The findings offer clues about potential techniques that could be employed to prevent infections in patients who need these devices to stay alive.

“We’re probing the initial step to that biofilm formation,” said Steven Lower, scientist at Ohio State and lead author of the paper reporting the study’s results.

“Can you shut that down somehow? If that bacterium never sticks, there’s no biofilm. It’s that simple. But it’s not quite that simple in practice.”

Using Staph cells collected from patients–some with cardiac device-related infections–the researchers examined how these bacteria adhere to implants to create a biofilm.

The bond forms when a protein on the bacterial cell surface connects with a common human blood protein coating an implanted device.

But an estimated half of all Americans have Staph bacteria living in their noses, and not every cardiac implant patient develops an infection.

So why do some strains of these bacteria cause infection while others remain dormant?

The researchers discovered that Staph surface proteins containing three genetic variants, or single-nucleotide polymorphisms, formed stronger bonds with the human proteins than did Staph proteins without those variants. 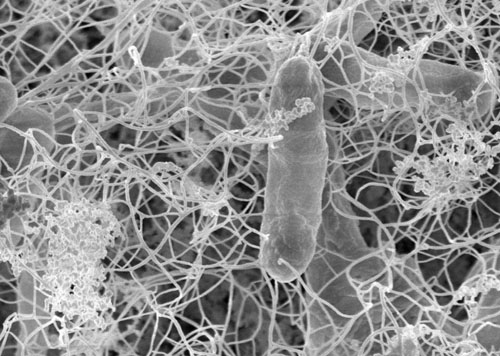 Ohio State’s Steven Lower specializes in the molecular-level relationships between inanimate surfaces and living microorganisms. This image shows an electron micrograph of a bacterial biofilm from a sample collected at the Kempton Mine complex in Maryland. Similarly, Staphylococcus aureus bacteria form biofilms on the surfaces of cardiac implant devices. The only treatment for these persistent infections is removal of the device. Image courtesy of Steven Lower.

The presence of these genetic variants was associated with the strains of bacteria that had infected implanted cardiac devices.

The finding is a first step toward preventing the bacteria from bonding to the devices.

“It will be useful to explore this in more detail and see if we can understand the basic science behind how these bonds form, and why they form,” Lower said. “Perhaps then we can exploit some fundamental force law.

Lower, a scientist with a background in geology, physics and biology, collaborated for a decade with Vance Fowler, a scientist at Duke’s Medical Center and the study’s co-lead author.

Fowler, who specializes in infectious diseases, assembled a rare library of hundreds of Staphylococcus aureus isolates collected from patients.

Fowler hopes his samples might help answer a broader question related to varied patient responses to the blood infection bacteremia.

“I believe that our research is a critical first step towards understanding, and eventually preventing, cardiac device infections caused by Staphylococcus aureus,” Fowler said.

Single-cell studies of bacteria are complicated by their tiny size, one millionth of a meter, so an atomic-force microscope is required to visualize their behavior.

Co-author and Ohio State researcher Nadia Casillas-Ituarte performed these experiments, connecting single Staph bacteria to a protein-coated probe to allow bonds to form, and then rupturing the bonds to measure the strength of each connection.

Casillas-Ituarte simulated the human heartbeat, allowing bonds to form over the course of a second and then pulling the probe away.

By doing this at least 100 times on each cell and verifying the work on hundreds of additional cells, she generated more than a quarter-million force curve measurements for the analysis.

“The first step is to determine how a bacterium ‘feels’ a surface,” she said. “You can’t stop that process until you first understand how it happens.”

The researchers coated the probe with fibronectin, a common human blood protein found on the surface of implanted devices.

Staph bacteria can create a biofilm by forming bonds with this protein through a protein on their own surface called fibronectin-binding protein A.

To learn more about the bacterial protein, the scientists then sequenced the amino acids that make up fibronectin-binding protein A in each isolate they studied.

This is where they found the single-nucleotide polymorphisms (SNPs, pronounced “snips”), which were more common in the isolates collected from patients with infections related to their heart implants.

To further test the effects of these SNPs, the team used a supercomputer to simulate the formation of the bond between the bacterial and human proteins.

When they plugged standard amino acid sequences from each protein into the supercomputer, the molecules maintained a distance from each other.

When they altered the sequence of three amino acids in the bacterial surface protein and entered that data, hydrogen bonds formed between the bacterial and human proteins.

“We changed the amino acids to resemble the SNPs found in the Staph that came from cardiac device-infected patients,” Lower said. “So the SNPs seem to have a relationship to whether a bond forms or not.”

Fibronectin-binding protein A is one of about 10 of these types of molecules on the Staph surface that can form bonds with proteins on host cells, Lower noted.

It’s also possible that fibronectin, the human protein on the other side of the bond studied so far, might contain genetic variants that contribute to the problem.

What the scientists do know is that bacteria will do all they can to survive, so it won’t be easy to outsmart them.

“Bacteria obey Charles Darwin’s law of natural selection and can evolve genetic capabilities to allow them to live in the presence of antibiotics,” Lower said.

“Most physicists would tell you there are certain laws of physics that dictate what happens and when it happens, and you can’t evade or evolve ways around those.

“If you understand the basic physics of it, can you exploit a fundamental force law that bacteria can’t evade or evolve a mechanism around?”

Additional co-authors include Supaporn Lamlertthon and L. Barth Reller of Duke; Roberto Lins of the Universidade Federal de Pernambuco, Recipfe, in Brazil; Ruchirej Yongsunthon, Eric Taylor, Alex DiBartola and Brian Lower of Ohio State; Catherine Edmonson and Lauren McIntyre of the University of Florida; Yok-Ai Que of the University of Lausanne in Switzerland; and Robert Ros of Arizona State University.