AUSTIN, Texas — The ancient remains of a teenage girl found in an underwater Mexican cave establish a definitive link between the earliest Americans and modern Native Americans, according to a new study released on May 15, 2014 in the journal Science.

The study was conducted by an international team of researchers from 13 institutions, including Deborah Bolnick, assistant professor of anthropology at The University of Texas at Austin, who analyzed DNA from the remains simultaneously with independent researchers at Washington State University and the University of Illinois at Urbana-Champaign.

The findings have major implications for our understanding of the origins of the Western Hemisphere’s first people and their relationship to contemporary Native Americans.

The most ancient human remains in the Americas have baffled scientists because their skulls are narrower and have other measurably different features from those of Native Americans. Some researchers have hypothesized that these individuals came to the Americas from as far away as Australia, Southeast Asia or Europe. 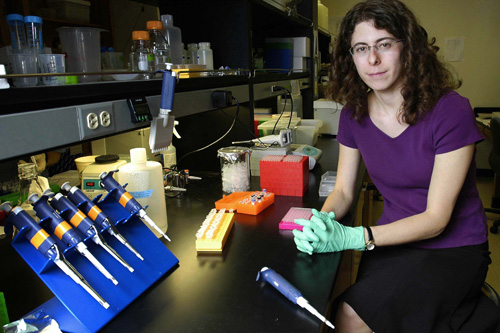 Bolnick and her colleagues Brian Kemp of Washington State University and Ripan Malhi of the University of Illinois at Urbana-Champaign analyzed the DNA from the tooth of the adolescent girl who fell into a sinkhole in Mexico’s Yucatán Peninsula more than 12,000 years ago. The remains were found surrounded by a variety of extinct animals more than 130 feet below sea level in Hoyo Negro, a deep pit within the Sac Actun cave system in the Yucatán.

In three separate labs, the researchers independently examined the tooth’s mitochondrial DNA, which is maternally inherited (passed down from mother to child).

Each of the labs found that the ancient girl belonged to a genetic lineage shared only by Native Americans. This is the first time researchers have been able to match a skeleton with an early American (or Paleoamerican) skull and facial characteristics with DNA linked to the hunter-gatherers who moved onto the Bering Land Bridge from northeast Asia between 26,000 and 18,000 years ago, spreading southward into North America sometime after 17,000 years ago.

The study was led by Mexico’s National Institute of Anthropology and History, and coordinated by James Chatters, owner of Applied Paleoscience, an archaeological and paleontological consulting firm in Bothell, Wash.