Researchers at Yale School of Medicine have, for the first time, described the genetic basis of endometriosis, a condition affecting millions of women that is marked by chronic pelvic pain and infertility. The researchers’ discovery of a new gene mutation provides hope for new screening methods.

Published in the Feb. 3 early online issue of EMBO Molecular Medicine, the study explored an inherited mutation located in part of the KRAS gene, which leads to abnormal endometrial growth and endometrial risk. In endometriosis, uterine tissue grows in other parts of the body, such as the abdominal cavity, ovaries, vagina, and cervix. The condition is often hereditary and is found in 5%-15% of women of reproductive age, affecting over 70 million women worldwide.

Although the disorder has been studied for many years, its exact cause and how it develops remained unclear. It was previously shown that activating the KRAS gene caused mice to develop endometriosis. However, no mutations in this gene have been identified in women with endometriosis. 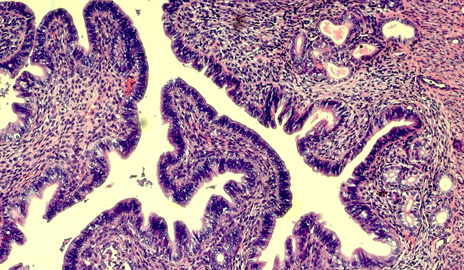 An example of the more aggressive endometriosis seen in women with the KRAS gene variant. Image credit: Yale University

Led by senior author Dr. Hugh S. Taylor, professor and chief of the Division of Reproductive Endocrinology and Infertility in the Department of Obstetrics, Gynecology & Reproductive Sciences, the authors studied 132 women with endometriosis and evaluated them for a newly identified mutation in the region of the KRAS gene responsible for regulation. This mutation was previously linked to an increased risk of lung and ovarian cancer by study co-author Joanne Weidhaas, M.D., assistant professor of therapeutic radiology.

“We found that 31% of the women with endometriosis in the study carried this mutation, compared to only 5.8% of the general population,” said Taylor. “The presence of this mutation was also linked to higher KRAS protein levels and associated with an increased capacity for these cells to spread. It also may explain the higher risk of ovarian cancer in women who have had endometriosis.”

The Yale team is the first to identify a cause of this common and previously little understood disease. “This mutation potentially represents a new therapeutic target for endometriosis as well as a basis of potential screening methods to determine who is at risk for developing endometriosis,” said Taylor.

The National Institutes of Health supported the study.