COLLEGE PARK, Md. – Immigrants to Maryland contribute significantly to the state’s economy, and were vital to its workforce expansion in both technical and less-skilled occupations from 2000 to 2010, concludes a new report by a Maryland commission. During this period, immigrants mostly complemented rather than competed with U.S.-born state residents for jobs, it adds.

The Commission to Study the Impact of Immigrants in Maryland, a state panel coordinated by the University of Maryland, evaluated the economic contributions of the state’s foreign-born and the cost of government services for them. It also studied the education experience of the children of immigrants, immigration law enforcement issues facing local communities, and the use of the federal E-Verify system to verify workers’ immigration status. 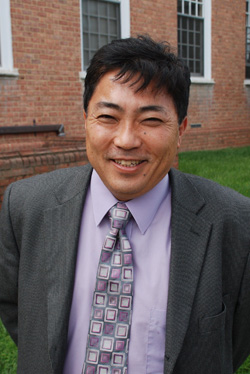 The panel’s final report, The Impact of Immigrants in Maryland, says the state’s foreign-born workers accounted for more than 57 percent of workforce expansion from 2000 to 2010. This was well above the national average of 45 percent.

Also, the report urges legislators to take a long view of immigration, which will show that the benefits significantly outweigh the costs, even the short run fiscal costs of providing state and local services. It says the state would be “foolhardy” to shortchange the education of immigrants’ children, who will be part of the state’s future workforce.

“The panel has adopted a common sense approach that we believe reflects the will of the State,” says Commission Chair Larry Shinagawa, a University of Maryland professor and demographer. “We’ve based our findings on the demographic and economic facts and the legal responsibilities of Maryland’s jurisdictions, and we believe our recommendations can help the State leverage global energy and talent to continue as a diverse, prosperous, and dynamic community.”

The General Assembly authorized the commission in 2008, and the panel first met in 2010. As staff director, University of Maryland economist Jeffrey Werling, who directs the university’s econometric research center, Inforum, coordinated the work of the panel, which included representatives from the governor’s office, both houses of the Assembly, and the private sector. Together, they scoured data sources and immigration literature and interviewed dozens of witnesses.

Among the report’s major findings and recommendations:

ECONOMIC IMPACT
“Immigrants have made considerable contributions to Maryland’s leading industries in the information, science, and medical fields,” the report says, pointing to evidence from 2000 to 2010. Additionally, unskilled immigrants play important roles in agriculture, seafood, construction, tourism, and transportation.

“Without the influx of foreign-born workers, expansion in these labor-intensive industries would have been choked off, increasing prices and discouraging growth across the economy,” it finds. 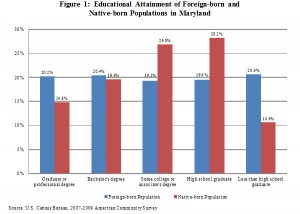 The report did note that when economic growth is weak, competition from new immigrants may lead to lower wages and contribute to unemployment among lower-skilled workers. “Notably, when it occurs, the negative effects of new immigration are most concentrated on the wage and employment opportunities of previous low-skilled immigrants.”

FISCAL IMPACT
Foreign-born workers’ contribution to economic growth largely supplies the tax and other resources needed to cope with the larger population that immigration produces, the report says. A 2007 Congressional Budget Office report concluded that, in aggregate and over the long term, immigrants pay more in federal, state, and local taxes than they use in government services.

The rapid influx of lesser-skilled immigrants can strain the capacity of state and local government budgets to supply health and education services. About three-fourths of the costs of serving immigrants, regardless of legal status, involve providing a public education for their children – services the U.S. Supreme Court says cannot be denied. Many of these children are U.S. citizens.

LAW ENFORCEMENT
The report finds that immigrants are less likely to commit violent crime than the U.S.-born, and it urges communities to be wary of federal programs designed to engage local police agencies in the enforcement of U.S. immigration law.

There are two major programs that can involve local law enforcement agencies. Under “Secure Communities,” fingerprints of those arrested for any criminal offense that are sent for identification to the FBI are automatically forwarded to immigration officials to determine whether the person in custody is subject to deportation. A second program, ”287(g),”creates a partnership that deputizes local officers to enforce federal immigration law.

The Commission’s recommendation: “Programs that enroll local law agencies in enforcing immigration law can work against the interests of Maryland’s communities. Local jurisdictions should engage with these programs only under certain conditions.”

EDUCATION
The education of children of immigrant parents provides many challenges to public school systems, the report finds. Some immigrant youth feel a sense of isolation from their communities and pessimism surrounding their futures, failing to get into a positive cycle of academic enrichment, extracurricular activities, and social engagement.

“Regardless of their status, it is most likely that the children of unauthorized immigrants will be part of the labor force over the coming decades,” the report says. “This labor force will underpin the U.S. and Maryland economies, not to mention the Social Security and Medicare benefits that current workers expect to receive. It would be foolhardy, then, for state and local communities to withhold education and other opportunities from those future workers.”

To insure Maryland’s continued global economic and technical leadership, the state must redouble its efforts to provide superior education at every level to all young residents, including the foreign-born, regardless of immigration status, the report concludes.

A full copy of the report is available online: https://www.inforum.umd.edu/mdimmigration/content/md_immigration_commission_finalreport.pdf