A Piece of History Rediscovered

What began as an assignment for an English course has now captured international attention. Senior Malcolm Burnley shares details about a little known piece of Brown history: a 1961 visit to campus by African American icon Malcolm X.

Enrolled in Elizabeth Taylor’s narrative writing course last semester, Burnley had an assignment: Write a historical narrative based on something that really happened. The students were instructed to use the University Archives at the John Hay Library.

Burnley, editor of the College Hill Independent, was drawn to the dusty compilations of the Brown Daily Herald. While flipping through pages, he came across an image of Malcolm X. That lone photo launched a research project that led Burnley to discover a little-known chapter of Brown and Providence history: the details of Malcolm X’s 1961 visit to campus.

On May 11, 1961, Malcolm X made his first and only stop in Providence. According to Burnley, his visit here was “provoked” by a critical essay on the Nation of Islam written by Pembroke student Katherine Pierce ’62 and published in the Brown Daily Herald. (The BDH editor-in-chief at the time was Richard Holbrooke ’62, who would later become an American diplomat and ambassador). Pierce and Holbrooke were both instrumental in organizing Malcolm X’s visit to Brown.

That evening, addressing an overflowing Sayles Hall, Malcolm X delivered a forceful endorsement of black power and a holistic rejection of the American political establishment. More than 800 people paid 50 cents for tickets to see him, including students, community members, and approximately 200 Nation of Islam supporters. The speech and a question-and-answer session that followed elicited laughter, gasps, and applause from the audience. 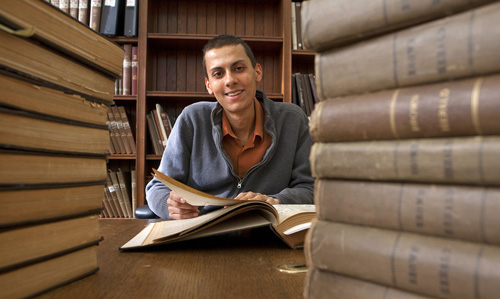 A 1960s icon rediscovered. Working on an assignment for a writing class, Brown senior Malcolm Burnley found a story that would land him on NPR, the BBC and other major media. Image credit: Mike Cohea/Brown University

Many details of that evening were all but lost, until now. Burnley’s research led him to a long-forgotten audio recording of the event. Pierce had given it to the Brown Archives a few years ago, and no one had ever accessed it. Burnley says no one had listened to it in 50 years.

“Before knowing the tape existed, I thought this was an interesting story, but since, it’s inspired me to think about this project as a truly significant piece of history,” Burnley said.

After listening to and transcribing the tape, Burnley continued his work throughout the fall semester. He interviewed Brown alumni who were in the audience that night and conducted further research to place the previously undocumented Brown event within the context of Malcolm X’s career. He says the speech was atypical of Malcolm X’s other speeches during that time, because it reflected a shift from his hardline views on separatism.

Burnley’s discovery has garnered international attention. Between classes and studying, he’s shared his story with National Public Radio, BBC World Service, the Associated Press, and others.

“This whole thing has been serendipitous and just spiraled,” he said. “I’m lucky to have come across a story at Brown that reveals a larger historical moment. … It has become a defining experience as a student at Brown, and as a writer.”