A UA-led study provides some of the first evidence for the hypothesis of co-divergence between parasites and hosts acting as a major driver of biodiversity.

Say what you will about the parasitic lifestyle, but in the game of evolution, it’s a winner.

Given that about half of all known species are parasites, biologists have long hypothesized that the strategy of leeching off other organisms is a major driver of biodiversity. Studying populations of Galápagos hawks (Buteo galapagoensis) and feather lice that live in their plumage (Degeeriella regalis), a group led by University of Arizona ecologists and evolutionary biologists has gathered some of the first field evidence suggesting that a phenomenon called co-divergence between parasites and hosts is indeed an important mechanism driving the evolution of biodiversity.

“The idea is really simple,” said the study’s lead author, Jennifer Koop, who is a postdoctoral fellow in the lab of Noah Whiteman in the UA’s Department of Ecology and Evolutionary Biology. “Each time a host population splits into separate populations that potentially become different species, we predict that their parasites could do the same thing.”

However, biologists have long struggled to test this hypothesis, as parasites are elusive. 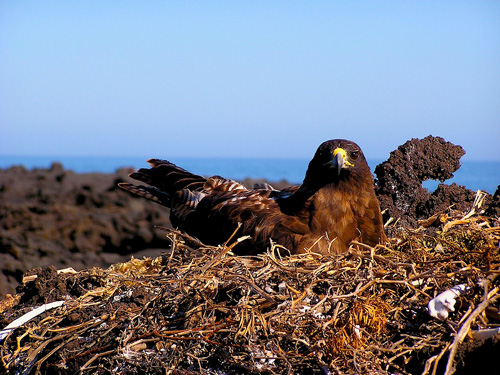 “Often, the evolutionary trees of parasites and their hosts are congruent – they look like mirror images of one another,” said Whiteman, who is an assistant professor in EEB, a joint assistant professor in the Department of Entomology and the School of Plant Sciences, and a member of the UA’s BIO5 Institute. “But because parasites tend to be inside or attached to hosts, their distributions are difficult to study.”

“We found the lice are passed on from mother to babies during brooding, almost like genes,” Whiteman said. “They’re evolutionary heirlooms, like your family’s silverware or engagement ring diamond.”

Remarkably, the findings, which are published in the journal Biology Letters of the Royal Society, revealed that the population structure of the lice matched that of the birds across the archipelago, even though the two are very different species. 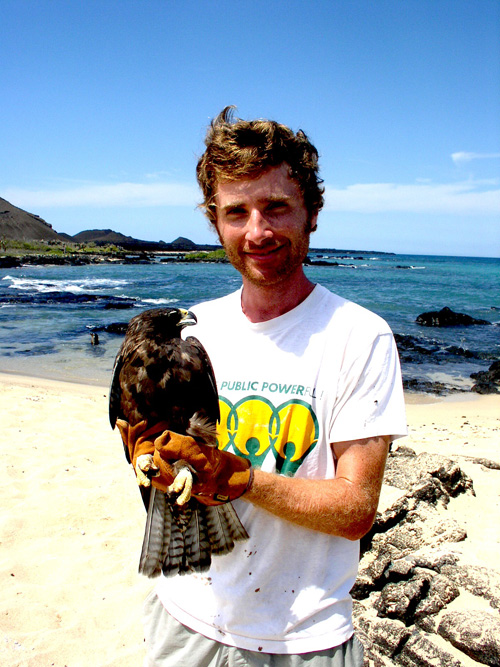 Noah Whiteman with a Galápagos hawk. (Photo by Jenny Bollmer)

“To the lice, each bird is an island, and their populations are very different from bird to bird,” Whiteman said. “The same pattern is repeated between bird populations on different islands. It’s like Russian dolls.”

In other words, the lice living on any one bird and its offspring are more closely related than the lice living on a different bird. As the birds diversify into distinct populations on each island, their parasites diversify with them. The findings help explain the rapid rate of parasite evolution, according to the research team.

“You have to be in the right spot at the right time to see this process happening,” Koop said. “Our study empirically demonstrates an important evolutionary process in which the hawks separate into different populations, and the lice living on them do the same.”

This process is hypothesized to lead to the formation of different species, in this case different species of hawks and lice, and may explain some of the extraordinary diversity seen among parasites, she said. 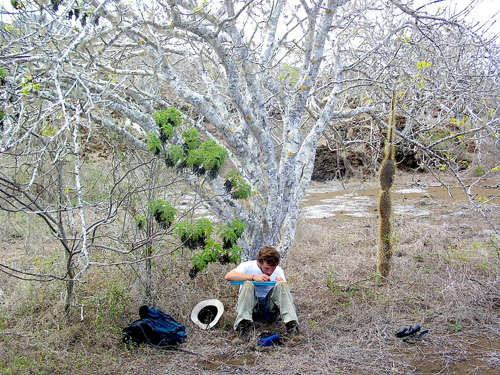 The team chose the Galápagos Islands, located 575 miles off the west coast of Ecuador, for the study because the species that colonized the geologically young group of islands have evolved in isolation, making the area an ideal natural laboratory.

“Of all the vertebrate species native to the Galápagos, the Galápagos hawk is the most recent arrival,” Whiteman said. “So whatever is happening in terms of evolution of the bird population and the parasite population is most likely in the earliest stages of that process.”

In four years of fieldwork on eight major islands, the team caught hundreds of Galápagos hawks – which later were released unharmed – and collected blood samples and feather lice for genomic analysis, in a partnership with the Galápagos National Park. Whiteman said the hawks’ lice are specialized on their host species and the feathers they consume, and unable to survive on any other species.

Co-authors Karen DeMatteo and Patricia Parker, both at the Department of Biology at the University of Missouri-St. Louis, then used the DNA from the samples to generate a genetic fingerprint of each population. Parker helped with the fieldwork.

A better understanding of how parasites and their hosts coevolve has implications for biomedical sciences, according to Whiteman. In addition, it can help researchers who study parasites as evolutionary tags of the host species.

“The fact that we were able to work with these birds, which are the top predators in their habitat, and reveal some answers to fundamental questions in biology shows why such places should continue to be preserved,” Whiteman said.

The study was supported by grants from the National Science Foundation, the Saint Louis Zoo’s Field Research for Conservation, the University of Missouri Research Board, the John Templeton Foundation, a UA Faculty Seed Grant to Noah Whiteman and a National Institutes of Health-PERT postdoctoral fellowship to Jennifer Koop.