From the Lab to Your Digital Device, Quantum Dots Have Made Quantum Leaps

Outside his career as a noted nanochemist, Lawrence Berkeley National Laboratory (Berkeley Lab) director Paul Alivisatos is an avid photographer. To show off his photos, his preferred device is a Kindle Fire HDX tablet because “the color display is a whole lot better than other tablets,” he says.

What he may neglect to mention to the viewer is that not only did he take the photograph, he also helped invent the nanotechnology allowing the viewer to see those brilliant greens, rich reds, and bold blues, all while using significantly less energy. In fact, the Kindle display utilizes a technology manufactured by Nanosys, a startup Alivisatos cofounded in 2001 to commercialize quantum dots. 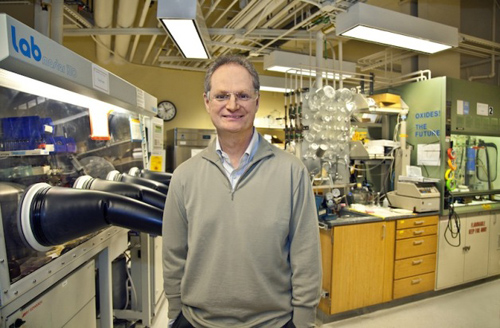 It was in his lab nearly 20 years ago that, along with collaborator Shimon Weiss, Alivisatos synthesized spherical nanocrystals made from a core of cadmium selenide inside a shell of cadmium sulfide. The remarkable thing about these quantum dots was that they could emit extremely pure light of almost any color, depending on their size.

Since then, Berkeley Lab’s quantum dots have not only found their way into tablets, computer screens, and TVs, they are also used in biological and medical imaging tools, and now Alivisatos’ lab is exploring them for solar cell as well as brain imaging applications.

Because the size of quantum dots can be easily “tuned”— different size dots emit different colors—the realm of possible applications is vast. “There are many thousands of academic research groups around the world using quantum dots regularly,” Alivisatos said.

The TV on the right using Nanosys’ quantum dot technology shows a 50% wider range of colors than the standard white LED set on the left. (Image courtesy of Nanosys)

Nanosys, based in Milpitas, California, employs about 100 people and is producing 25 tons of quantum dots every year, enough for 10 million TVs. Quantum dots are inorganic nanocrystals made from semiconductors and comprise a new class of materials. “Their unique property is that their emission line width is very narrow, on the order of 30 nanometers,” said Nanosys lead scientist Jian Chen. “It makes them very pure in color. They’re essentially the purest color phosphors out there.”

The displays in most electronics on the market today use liquid crystal display (LCD) screens, which typically involve shining a white light through a series of filters to produce the spectrum of colors. This results in wasted energy. Nanosys’ quantum dots are designed to enhance the color and energy performance of LCD displays.

It turns out that the core-shell structure of the quantum dots synthesized in Alivsatos’ lab was a key breakthrough for achieving high light conversion efficiency. “By using the core-shell structure, the photon conversion efficiency can be as good as, or close to, 100 percent,” Chen said. “What that means is, if 100 photons hit a quantum dot, almost 100 photons can be emitted by the quantum dot.”

Nanosys says its technology makes displays 20 percent more energy efficient, meaning longer battery life for the device. “Twenty percent doesn’t sound like a huge amount, but when you consider that the display uses half the power of a tablet or device, it’s actually a big improvement,” said Nanosys spokesman Jeff Yurek.

At some future point, Yurek says Nanosys may develop a lighting application for its quantum dots. “Quantum dots are the world’s most efficient light emitter—they’re almost 100 percent efficient,” he said. “There are interesting things you can do in terms of general lighting. We could make an LED light bulb more efficient while having the color quality of an incandescent bulb. That’s something further down the road for us.”

Alivisatos’ other quantum dot company—Quantum Dot Corp., which he cofounded in 1998 to commercialize use of quantum dots for luminescent labeling of biological tissues—has since been acquired, and that technology is now found in biological and medical imaging tools made by Thermo Fisher Scientific.

Meanwhile, he continues to work on quantum dots for other applications. One of the main areas is brain research, the subject of a major scientific initiative announced by President Obama in 2013, Brain Research through Advancing Innovative Neurotechnologies (BRAIN).

“For brain activity, quantum dots as we know them are not as likely to be useful for measuring membrane potential in neurons and things like that, but there are a lot of ideas for how to make new generations of quantum dots that would be sensitive to neurotransmitters, so there could be potential for neuroimaging,” he said. “It’s very early stage, but we’re certainly working on stuff like that.”

Another possible application is for solar cells, which was the original focus of Nanosys when it was launched. “For a little while I was discouraged about the solar energy applications,” Alivisatos said. “More recently, we’ve been working as a part of this (Dept. of Energy) Energy Frontier Research Center with groups at Caltech and the University of Illinois [the Light-Material Interactions in Energy Conversion Center led by the California Institute of Technology]. We have ideas for luminescence concentrators, where quantum dots may have very significant advantages for solar. So we have a new idea. It’s not yet proven in the lab, but the early work is promising.”