From Near-Dropout to PhD, Berkeley Lab Scientist Now at Forefront of Biofuels Revolution

To see biochemist Ee-Been Goh in the lab today, figuring out how to rewire bacteria to produce biofuels, one would never guess she was once so uninterested in school that she barely made it through junior high.

“My mom would say, ‘You used to be the worst in school—why would you want to go for more school?’” Goh said. “That was the joke when I was going into grad school.”

Today Goh is a project scientist at the Joint BioEnergy Institute (JBEI), a Department of Energy Bioenergy Research Center led by Lawrence Berkeley National Laboratory (Berkeley Lab). She has been lead author on two important publications on methyl ketones, a compound found in blue cheese that has also turned out be one of the most promising and high-performing biofuels at JBEI. 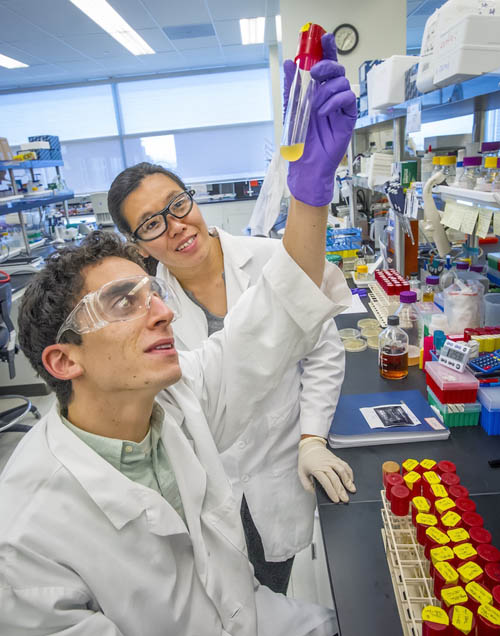 Her path into science is an object lesson she likes to share with the high school students she mentors through a JBEI summer program called Introductory College Level Experience in Microbiology (iCLEM). “I always tell the iCLEM kids how I was a terrible student in Singapore,” she said. “I was a tomboy, and I just loved goofing off on the streets and playing sports. I really hated school. I would’ve loved to have had a career in professional sports.”

At the age of 14, her parents moved the entire family to Vancouver, largely for a better educational experience for Goh and her two sisters. Getting to do hands-on science activities in high school, such as animal dissections, sparked her interest in science. “When you do it yourself, you understand things a lot better than when you’re being bombarded with words on a board or an overhead projector,” she said. “That’s something that really caught on for me.”

Likewise, she encourages students to take advantage of any opportunity they might have. “I think some of these students get really dejected when they don’t do well in school, and as you get more dejected, you just don’t want to put in any more effort,” she said. “That’s how I felt when I was a little kid. The most important thing for me is to fan their interest.”

As an undergrad at the University of British Columbia, her opportunity was an internship in the microbiology lab of Julian Davies, a renowned scientist in the field of antibiotics and drug resistance. “He was retired and in his 70s, but he really loved science so he was still taking on undergrad students who liked to do research,” she said. “He was very hands-on and got very excited even with small results, and it got me excited too.”

With encouragement from Davies, Goh decided to pursue an advanced career in science. She did her graduate work in microbiology at UC Davis, where her research focused on understanding how bacteria communicate with each other. This work in the basic sciences taught Goh useful research techniques, but she realized she wanted to pursue a career in the applied sciences.

“With applied science it impacts more people and has broader reach,” she said. “People can take it and use it. That’s what science is about, right?”

Landing a job at JBEI fit that requirement perfectly. 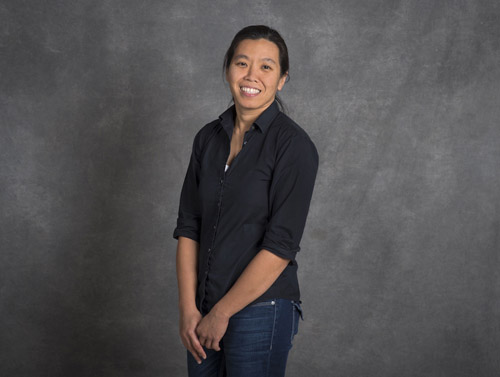 From blue cheese to climate change

“Many valuable commodity chemicals and fragrances are often derived from petroleum,” Goh said. “At JBEI we’re aiming not just to make biofuels but also to replace a lot of everyday products that come from that barrel of crude oil. We’re trying to do our part in slowing down climate change—that’s the ultimate goal.”

The focus of her research has been methyl ketones, which are derived from fatty acids and show great promise for biodiesel fuels. Not only are methyl ketones a potential biodiesel, there is a market for these compounds as flavors and fragrances. Working with Harry Beller, director of Biofuels Pathways at JBEI, Goh’s research is aimed at engineering E. coli bacteria to produce methyl ketones as efficiently as possible.

“Ee-Been has made significant scientific contributions to the development of new biofuels at JBEI,” Beller said. “Her two first-author publications on engineering and optimizing a novel methyl ketone pathway in E. coli have made a notable impact in the area of fatty acid-derived biofuels—medium-chain methyl ketones are among our best performing biofuels at JBEI.”

Beller elaborated on what made Goh good at what she does: “Qualities that have helped Ee-Been be a successful scientist are her persistence and intelligent approach to troubleshooting. In biotechnology, as in many areas of science and technology, only a fraction of scientific avenues we follow lead to clear success. Ee-Been has the fortitude and ability to learn from things that didn’t work to eventually pursue things that do.”

And although she occasionally likes to pull pranks in the lab—switching out medium-sized gloves for small ones is a perennial favorite—her JBEI colleagues have voted her “JBEI Citizen” for two consecutive years for “fostering a positive working environment through helping colleagues.”

“Perhaps Ee-Been’s most lasting legacy at JBEI is all the people she has helped along the way,” Beller said. “She’s been very generous with her time, including ongoing involvement in the iCLEM summer internship program for economically disadvantaged high-school students.”