In the Proceedings of the National Academy of Sciences, a team of scientists shows how mutations in the gene GPT2 lead to a rare developmental and potentially degenerative brain disease.

PROVIDENCE, R.I. [Brown University] — In rare cases — for instance, among siblings in two families from Pakistan and Oman described in a new study — children have been born with an unnamed neurological disorder. Now researchers have not only identified the genetic mutations involved, but also replicated them in lab cultures and mouse models to produce an initial understanding of how the mutations cause the disease.

The study in the Proceedings of the National Academy of Sciences highlights both new medical and scientific opportunities, said Dr. Eric Morrow, associate professor of biology and of psychiatry and human behavior in the Warren Alpert Medical School of Brown University.

“This is a clear, new neurogenetic disorder due to mutations in GPT2,” said Morrow, who also sees patients at Bradley Hospital and is affiliated with the Brown Institute for Brain Science. “In addition to the relevance this has to the diagnosis of developmental disorders, and potentially therapeutics, it is also a window into how the brain develops and how the brain functions.” 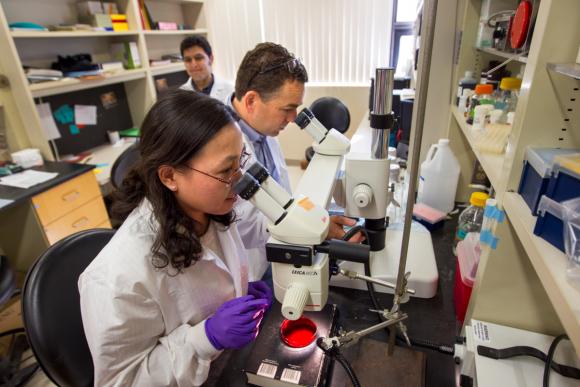 The paper reveals specific findings of basic neurodevelopment, Morrow said. The gene at issue, GPT2, is expressed in the nucleus of cells, but the enzyme it generates appears vital to metabolic pathways in the mitochondria, organelles which provide energy and biosynthetic building blocks to cells. The consequences of the mutations appear to be in leaving developing brains without biosynthetic abilities to grow properly, and to deficits in metabolites that could help prevent degeneration.

Moreover, the G in the gene name stands for glutamate, an important neurotransmitter that governs how brain cells, or neurons, connect and interact.

“To find a glutamate metabolizing enzyme that is associated with a brain disease is an opportunity to understand how that neurotransmitter might work or be modulated,” Morrow said.

The wild-type, or normal, mouse neuron on the left has more synapses than the one with a mutation in the gene GPT2. Image credit: Ouyang et. al./Brown University

The team, which also includes collaborators in Pakistan and Oman, began the investigation more than five years ago when they were studying two families in those countries with children whose symptoms included below-normal postnatal brain growth, intellectual disability and progressively worsening motor problems. The children, 14 in all across the two large families, typically were able to walk by age 3, yet a majority lost that ability later as motor control diminished in their legs, as a condition called spastic paraplegia emerged. Spastic paraplegia is generally considered to involve a neurodegenerative cause, Morrow said.

The team traced a genetic mutation to chromosome 16, and as next-generation sequencing technology became available, they were able to find two specific mutations in GPT2. In the interim, a few other research groups had also linked GPT2 mutations to neurological disease in other families, including a family in the U.S. Taken together, Morrow said, the studies provide strong evidence that the gene is relevant to neurological disease.

With gene mutations identified, Morrow and his collaborators went much further to learn how the mutations could cause the disease. To do that the team created models in which the mutations were induced in human cells and also in mice. Like the children with GPT2 mutations, developing mice with the mutations also showed reduced neural and brain growth.

In these lab models the researchers were able to study in detail the different biochemistry at play with and without the mutations. In the human cells they saw that mutations led to reduced enzyme activity. They also determined that the protein locates in the mitochondria.

Mutant mice engineered with a GPT2 enzyme deficiency showed abnormal brain metabolism. For example, some of the differences undermined a process called the TCA cycle, which is important for producing energy and generating building blocks for cells.

While these metabolic pathways have been well studied in rapidly dividing cells such as in cancer, Morrow said, they have not been as thoroughly studied in differentiating neurons growing extensions and connections during early childhood. To do that, Morrow and colleagues teamed up with experts in cancer metabolism, Ralph DeBerardinis at the University of Texas Southwestern Medical Center and Shawn Davidson and David Housman at MIT, to develop experiments pertinent to GPT2 and brain. When the researchers looked at the neurons of developing mice, they found that ones with the GPT2 mutations produced fewer synapses, the connections between neurons that make up brain circuits.

The researchers conducted large-scale profiling of metabolites in the brains of the mutant mice. They found in the GPT2 mutant mice abnormal metabolite levels related to amino acid metabolism, TCA and pathways required for protecting neuron health. The deficiencies in these neuroprotective metabolites, Morrow said, might explain why the disease appears to have a degenerative course.

Morrow’s team at Brown is now developing new hypotheses and testing them in the mouse model they developed. Not only are they seeking to refine and deepen their understanding of how those metabolic pathways regulate brain disease and function, but also, they are eager to test potential ways to rescue development and prevent disease progression.

“I believe there is hope that if these children were identified early as having this genetic condition, there may be an intervention that could prevent the progression,” Morrow said.

The researchers are also interested to learn more about how these mitochondrial metabolic pathways play key roles in the developing brain and how these pathways may contribute to brain health.

Several public and private organizations helped to support the research.