For UA Astronomy Students, the Sky is Not the Limit

UA astronomy students Kevin Hardegree-Ullman and Jake Turner designed, proposed, conducted and presented research on two recently discovered planets outside of our solar system while they were still undergraduates.

Deep in the cosmos, alien planets are circling distant stars, waiting to be pierced by the far-reaching gaze of Earth-bound telescopes. Some are Earth-like and have the potential to harbor liquid water and maybe even life. Others are enormous, gassy giants. All of them are different than any planet we know.

They are the exoplanets, planets outside of our solar system, which astronomers are only just beginning to discover and analyze.

Kevin Hardegree-Ullman and Jake Turner, then University of Arizona undergraduate astronomy students, decided to get to know two of them a little better.

Both members of the UA Astronomy Club, the students applied for telescope time to do a research project and solicited ideas from other club members. 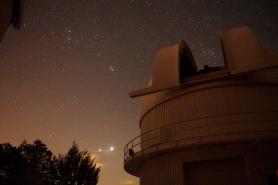 For Turner, who had been interested in exoplanets since he attended Don McCarthy’s Astronomy Camp on Mount Lemmon in 2006, the choice was easy. “I raised my hand, and no one else did,” said Turner, “and Kevin already knew what I was going to say.”

Hardegree-Ullman and Turner launched their exoplanet project in March of 2009. While the club has an official sponsor in John Bieging, a professor in the UA’s department of astronomy and Steward Observatory, the exoplanet project was entirely carried out by the students.

“We went through the full-blown proposal process that every astronomer in the department has to go through if they want telescope time,” said Hardegree-Ullman. Once their proposal was approved, the students began collecting data, operating the 61-inch telescope on Mount Lemmon by themselves.

“The interesting thing about the 61-inch telescope is that it’s completely run by the observer,” said Turner. “Most major observatories have a telescope operator who is in charge of moving and calibrating the instruments, but in this case the students do everything themselves. If something goes wrong we have to try to fix it on the spot, which helps with the experience because we learn how to do everything.”

The students studied two exoplanets using what is called the transit method: They observed the planets as they passed in front of their parent stars, temporarily blocking some of the stars’ light. Astronomers use the variation in light from the star, called a light curve, to study the planets, explained Hardegree-Ullman.

“The particular planets we’re looking at are called hot Jupiters,” he said. “Jupiter is about 11 Earth diameters, and these planets are a little bit bigger than Jupiter.” 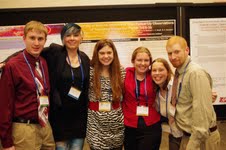 The team presented its data, which was some of the best ever seen for exoplanet studies, at the 219th American Astronomical Society meeting in Austin, Texas, in January. From left: Kevin Hardegree-Ullman, Allison McGraw, Lindsay Small, Allison Towner, Mandy Walker-LaFollette and Jake Turner. (Photo by Jake Turner)

Hardegree-Ullman and Turner are pushing the limits of current research capabilities with their first research paper, which they pan to publish in an astronomy journal later this year, with Turner as first author. It is only the second such study to attempt to detect the magnetic field around an exoplanet using optical telescopes.

“Astrobiologists believe magnetic fields could be one of the essential elements for life on a planet,” Turner said. “The magnetic field on Earth is very important for the development of life. It protects us from energetic particles from the sun. If we can detect magnetic fields on these big planets and we know how to detect them, then we can use the same method on the smaller planets.”

The pair presented their project twice at biannual meetings of the American Astronomical Society, where they found that the data they gathered often trumps previous studies on exoplanets. “Most scientists working on exoplanet projects don’t necessarily have access to 61-inch telescopes with such fine instrumentation like the one on Mount Lemmon,” said Hardegree-Ullman.

“Scientists sometimes walk up to our posters and tell us we have one of the best light curves they’ve ever seen,” said Turner. “And it will be from one of our worst nights.”

The project even spans the Atlantic Ocean: Turner contacted Marco Rocchetto, an undergraduate student in his second year at University College London in London, England, who agreed to join in the project. “He observed for us, and he’s analyzing the data himself through the same methods that we’re using,” said Turner.

The students collected and analyzed data from 2009 until their graduation in 2011, and the project continues to this day. The students also got some data for their project from members of the Catalina Sky Survey.

Hardegree-Ullman and Turner taught their fellow undergraduates how to analyze data after it was collected at the telescope. From back to front: Carter-Thaxton Smith, Mandy Walker-LaFollette and Brianna Smart. (Photo by Jake Turner)

“A major goal of the project is astronomy education,” added Hardegree-Ullman. “We have students that are really interested in research but a lot of them don’t know what they want to do, so we’re exposing them to these large research projects early. We just want to get students involved in all aspects of astronomy.”

Through working on the project, the students gain real experience with astronomy research that prepares them not only for class, but also for future careers. “The folks on this project are the go-to people in their observational astronomy class,” said Hardegree-Ullman.

The educational component of the project garnered enough attention that the department made it an official UA class: Astronomy 399, with Hardegree-Ullman and Turner as research advisors able to give pass or fail grades and academic credit to students working on the project.

“We have several people who are going to be upcoming seniors, so they’ve been doing this project almost as long as we have,” said Turner. “Hopefully they can take over and continue to teach the younger generations when we leave.”

They also want to maintain ties to the UA, Hardegree-Ullman said, and continue working on projects that involve undergraduates in research and span nations and continents in collaborations that are so important to advancing astronomy. And from there, who knows?