Do You Rowi? Windows Phone Twitter App a Big Hit

Microsoft employees Erik Porter and Nathan Heskew built Rowi, a Twitter app that makes full use of Windows Phone’s social media capabilities. The duo just released version 2, they’re building a Windows 8 app, and Rowi is now among some of the most popular apps in the marketplace.

REDMOND, Wash. – April 17, 2012 – Rowi may sound like some kind of rare New Zealand bird (which actually, it is) but it’s also a popular new Twitter app for Windows Phone created by two Microsoft employees.

Rowi was recently mentioned by tech blogger Joshua Topolsky of The Verge, who says Rowi “is probably the best experience you can have on Windows Phone with the (Twitter) social networking service — it’s a really well thought out and well made application.” 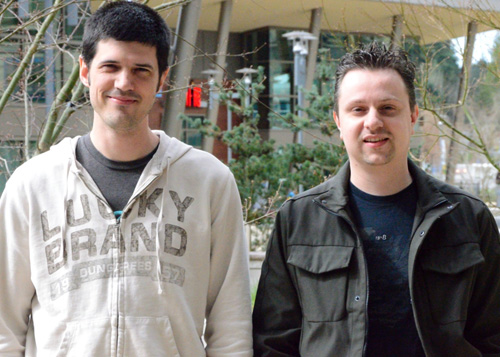 It’s pretty exciting for Porter and Heskew to watch Rowi’s success given that it was created in their spare time, and both have busy day jobs and families. They also both happen to be college dropouts.

“We’re both good developers, but we’re not very focused on the computer science part of it – as you can imagine, since we’re both dropouts. We’re focused on what cool things we can build,” Porter says. 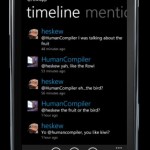 The two met while working on Microsoft’s Channel 9 team, and quickly figured out they had shared interests. They started spending weekends on a few projects, and even tinkered briefly with developing for iPhone.

“We gave it basically a week, and then realized we were going to have to spend a lot of time to figure out how that platform worked,” Porter says. “We said, ‘Let’s not do that.’ Then we saw Windows Phone, and we were like, ‘Ohhh. This is actually something we can do in our spare time.’”

Within a few days of downloading Windows Phone developer tools, the duo had the beginnings of Rowi. And with Microsoft’s employee developer program for Windows Phone, the two realized they could create and own their app in their spare time.

Because they are a team and didn’t want the app to be registered to an individual, they created a company, Hidden Pineapple – an inside joke from one of Porter’s favorite television shows, “Psych,” where there is a hidden pineapple in every episode.

So why build an app for Twitter? Porter was originally not a fan of the concept of Twitter, and dismissed it as “public texting,” continuing instead to maintain his personal blog.

As you start using it, you realize we’re all lazy beings. I actually barely blog anymore, Twitter makes it easier to communicate,” Porter says.

Heskew says he is more of a Twitter reader than a Tweeter.

“I mainly use it to keep up on things, and more recently just to chat with folks and to coordinate things,” he says. For example, he used Twitter to navigate and communicate on a recent trip to the South by Southwest Music Conference and Festival (SXSW).

While it’s exciting to build a successful app, it requires a lot of work and balance, they say.

“We’ve actually wanted to build other apps, but this thing has sort of taken over. We both have busy day jobs – for two and a half months Nathan was unable to work on Rowi at all, and I’ll have a week here and a week there where I can’t touch it,” Porter says. “For the most part, our users have been really patient with us. We’re honest with them, and we try to stay in constant contact. We want them to feel like we’re there for them all the time. Except not all the time, because we both have families.”

The beauty of having an app used around the globe is that when they communicate with Rowi users or release a feature, they get instant feedback – no matter what time it is in the U.S.

Rowi’s creators wanted to find an unusual name for their Twitter app, so they named it after a rare New Zealand bird. Image credit: Microsoft

The two said their target is somewhere between the Twitter beginners and advanced users. Although there is competition popping up all the time in the Marketplace in the form of other Twitter apps, the two are continuing to expand Rowi’s capabilities and are even building a version for Windows 8 that will sync with the Windows Phone version and be awesome on a tablet, they say.

“We want to build up a brand with Rowi so then we can have that same brand on Windows 8, which given the number of Windows users in the world also has great potential,” Porter says. “That should be super cool.”

Though building, maintaining and improving Rowi has kept them busy, they both like Windows Phone and want to help the platform in any way that they can, they say. They have also enjoyed stretching their app- and business-building legs.

“The big thing is to do it,” Heskew says, of their moonlight developing. “People always talk about starting things, but never actually do it. Just start.”