For Some Medical Residents, Empathy Declines With Long-Call

*In a newly published study, researchers found the majority of medical residents surveyed experienced a decline in empathy over the course of the oft-used “long-call” shift.*

Fatigue and sleep deprivation are undisputed job descriptors for medical residents, but results from a new study indicate the common “long-call” shift may have adverse effects not only for residents, but also their patients. 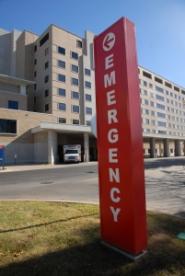 During the long-call shift, medical residents experience a number of stressors that could compromise the quality of care they provide to their patients. Stacey Passalacqua and Chris Segrin opted to study declines in empathy during the long-call shift, finding: "Declines in empathy predicted lower self-reported patient-centered communication during the latter half of the shift." Image credit: University of Arizona

Passalacqua, who earned her doctorate from the UA communication department, was studying the effect of occupational and environmental stressors on empathy and patient-centered communication over the course of the long-call shift.

Passalacqua is lead author on the article, “The Effect of Resident Physician Stress, Burnout, and Empathy on Patient-Centered Communication During the Long-Call Shift,” which she co-authored with Chris Segrin, who heads UA’s communication department.

The paper recently was published in Health Communication, a peer-reviewed journal. It also was presented at the National Communication Association’s annual convention in New Orleans at the end of last year.

Findings indicated 68 percent of the medical residents surveyed experienced a significant decline in empathy – generally defined as the compassion and concern one feels for another – toward patients as their 24 to 30-hour shifts waned on.

“We’re not talking about people who have been working in the ER for 30 years,” Segrin said.

“These are new professionals. Burnout is a one-way street; it accumulates over time,” Segrin added. “And right from the word ‘go’ in their training, they are already showing accumulative signs.”

During the study, medical residents reported on stress, burnout and empathy prior to beginning their shifts. Afterward, they reported on empathy, allowing Passalacqua and Segrin to draw comparisons.

Also, the physicians indicated their use of patient-centered communication behaviors during the last half of their shift, “the period of time when medical errors and sub-optimal treatment of patients is most likely to occur,” Passalacqua said.

Unlike many other studies, administering the survey at the medical facility before and after the actual shift enabled an investigation of changes in a very short period of time.

“Though it has been assessed yearly or quarterly among physicians in residency programs, no one has looked at the flux of empathy over the course of a single call shift,” Passalacqua said.

Prior studies have considered what damage a heavy workload and long hours can have on physician-patient interactions and what physical and emotional stress medical residents experience.

However, researchers have not yet studied the exact implications of declining “state” empathy and worsening patient care.

The particular focus on “state” empathy, the empathetic tendency that can fluctuate with time and situation, is a key feature of Passalacqua and Segrin’s investigation.

Traditionally, studies have focused on “trait” empathy, which is more stable and not sensitive to day-to-day or hour-to-hour changes.

“If you are an empathetic person generally, you’re probably going to have a high baseline level of empathy; but the idea here is that there is fluctuation in what we call your ‘state’ empathy,” Passalacqua said.

Chris Segrin, who heads UA's communication department, worked with Passalacqua to understand whether declines in empathy for those working during the long-call shift directly impacted the quality of patient care. Image credit: University of Arizona

“Empathy is an integral part of interpersonal relationships and, for health-care providers, improves diagnostic ability and helps reduce the potential of litigation,” she also said. “So this is a major problem if you have health-care providers experiencing a decline in empathy.”

Passalacqua and Segrin also found that the extent to which a resident perceived stress directly affected their risk of burnout and also contributed to lessening empathetic behaviors.

“You can think about this almost like a domino effect,” Segrin said.

“The end of the game for us is patient-centered communication – this is our ultimate concern,” he added. “But we’re trying to statistically model those dominos that fall before that degradation.”

While both acknowledge that some stress is inevitable, the study’s major findings hold implications for the medical community, training programs and also patients and their families.

“This is a very tough situation,” Passalacqua said, noting the benefits of the long-call for training and reducing patient handoffs, in addition to the risks.

Also, she and Segrin said the physician-patient relationship should be more readily viewed as a partnership, involving investment and input from both.

“More attention must be paid to the mental and emotional well-being of our health-care providers,” Passalacqua said.

“These individuals are expected to take care of us, but we need to make sure that they are taken care of, too,” she also said. “A physician suffering from high levels of fatigue and burnout isn’t going to be able to deliver the highest quality of care, or in this case specifically, patient-centered care.”

Patients as well as their families and caregivers also have a responsibility, Segrin said.

“The patient has to draw the physician in as well, and having some understanding of what might seem in the moment like someone who has a rough demeanor might actually be that they are sleep deprived with a large caseload,” he said. “Trying to meet them halfway is important for the patient to understand.”