For metals of the smartphone age, no Plan B

Many of the metals needed to feed the surging global demand for high-tech products, from smart phones to solar panels, cannot be replaced, leaving some markets vulnerable if resources become scarce, according to a new Yale study.

In a comprehensive analysis, a team of researchers from the Yale School of Forestry & Environmental Studies (F&ES) evaluated how all 62 metals or metalloids on the periodic table of elements are used in consumer products, and the extent to which each of those metals could be replaced if reserves dwindle or supplies become unreliable.

According to their findings, not one metal has an “exemplary” substitute for all of its major uses. And for a dozen metals, potential substitutes for each of their primary uses are either inadequate or do not exist at all, according to the study, published Dec. 2 in the Proceedings of the National Academy of Sciences.

This lack of substitutes underscores an increased urgency for better management of these resources, particularly as population and wealth increase worldwide, the researchers say.

“We all like our gadgets; we all like our smart phones. But in 20 or 30 years, will we still have access to all the elements necessary to provide the particular functions that make a smart phone so great?” said Barbara Reck, a research scientist at F&ES and co-author of the study. “Based on our findings, it is unlikely that substitution alone can solve potential supply restrictions for any of the metals on the periodic table.” 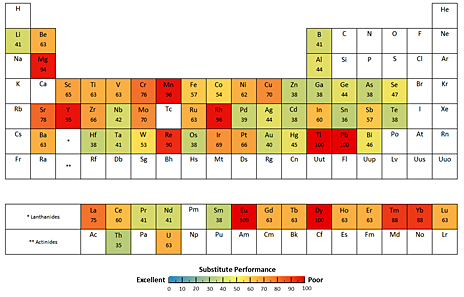 Many of the metals needed to feed the surging global demand for high-tech products, from smart phones to solar panels, cannot be replaced, leaving some markets vulnerable if resources become scarce, according to a new Yale study. Image credit: Yale University

The study represents the Yale group’s latest attempt to assess the “criticality” of the planet’s metal resources — defined by the importance of the elements’ uses and their availability — in the face of rising global demand and the increasing complexity of modern products.

Their ongoing research aims to produce a quantitative assessment of how metals are used on a global scale, the extent to which they are recycled, and, ultimately, how future demand will affect material resources.

For the new study, the team compiled a list of the major uses for all metals, the proportion of the metals attributed to those uses, and the best substitute materials — if they exist — based on a review of existing literature and interviews with materials scientists, consultancies, and product designers. The researchers then characterized the performance of those substitutes, assigning a numerical rating corresponding to “exemplary,” “good,” “adequate” or “poor.” They then compiled a color-coded periodic table highlighting the substitutability of each metal based on those scores.

While many of the findings were predictable, some results surprised the researchers. For example, for some widely used metals — including copper, chromium, manganese, and lead — no good substitutes exist for their major uses.

“We expected that at least a few of them would be completely substitutable,” said Ermelinda Harper, an associate research scientist at F&ES and co-author of the study.

Other metals with low to very low substitute potential include the superalloy metal rhenium, which is used in turbine engine components and radiation screens; the platinum group metal rhodium, used as a catalyst iin controlling vehicle emissions; thallium, used in cardiovascular imaging; and the rare earth elements (REEs) dysprosium, used in permanent magnets in computers and wind turbines, europium and yttrium, used in flat panel displays, and thulium and ytterbium, used in laser technologies.

“Specialty metals are being used more and more for new technologies such as solar energy systems,” Harper said. “As we employ these new technologies, it’s really important that we think about what metals are employed, and whether there will be a stable supply of them.”

While specific material uses may fluctuate depending on technological innovation and market forces, the findings provide a valuable benchmark for the analysis of the lifecycle of metals and the market potential for substitute materials, researchers said.

“We hope by demonstrating that substitution is not as straightforward as one may think we can stimulate a discussion on the broader implications,” said Reck. “For example, if we want to secure the future supply of these specialty metals, we need to do a better job recycling them. This requires efforts at many different levels, from product design, to waste collection and separation, to recycling technology.”

The lead author of the study is Thomas E. Graedel, the Clifton R. Musser Professor of Industrial Ecology and professor of geology and geophysics at the Yale School of Forestry & Environmental Studies.