Floods didn’t make floodplains fertile during the dawn of human agriculture in the Earth’s far north because the waters were virtually devoid of nitrogen, unlike other areas of the globe scientists have studied.

Instead, the hardy Norsemen and early inhabitants of Russia and Canada have microorganisms called cyanobacteria to mostly thank for abundant grasses that attracted game to hunt and then provided fodder once cattle were domesticated. The process is still underway in the region’s pristine floodplains.

The new findings are surprising because it’s long been assumed that nitrogen crucial to plant growth mainly arrived with floods of river water each spring, according to Thomas DeLuca, a University of Washington professor of environmental and forest sciences and lead author of a paper in the Nov. 6, 2013 issue of the journal PLOS ONE. 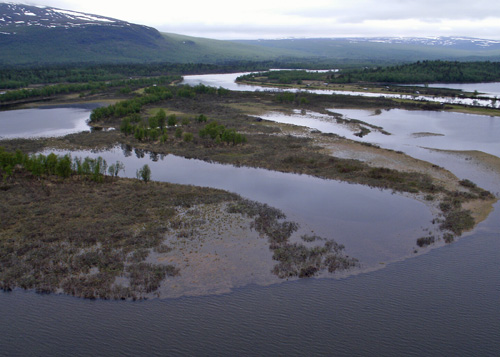 Sedges and willow trees get the nitrogen they need from cyanobacteria living in the sediments of pristine boreal floodplains found at 60 degrees latitude and north into the Arctic Circle. Image credit: T DeLuca/U of Washington

Discovering that cyanobacteria in the floodplains were responsible for nitrogen fixation – that is taking it from the atmosphere and “fixing” it into a form plants can use – partially resolves the scientific debate of how humans harvested grasses there for hundreds of years without fertilizing, DeLuca said. It raises the question of whether farmers today might reduce fertilizer use by taking advantage of cyanobacteria that occur, not just in the floodplains studied, but in soils around the world, he said.

It also might lead to more accurate models of nitrogen in river systems because none of the prominent models consider nitrogen being fixed in floodplains, DeLuca said. Scientists model nitrogen loading of rivers, especially where industrial fertilizers and effluent from wastewater-treatment plants cause dead zones and other problems in the lower reaches and mouths of rivers.

Ten rivers and 71 flood plains were studied in northern Fennoscandia, a region that includes parts of Scandinavia and Finland. The rivers were chosen because their upper reaches are pristine, haven’t been dammed and are not subject to sources of human-caused nitrogen enrichment – much like river systems humans encountered there hundreds of years ago, as agriculture emerged in such “boreal” habitats. Boreal habitat – found at 60 degrees latitude and north all the way into the Arctic Circle, where it meets tundra habitat – is the second largest biome or habitat type on Earth. 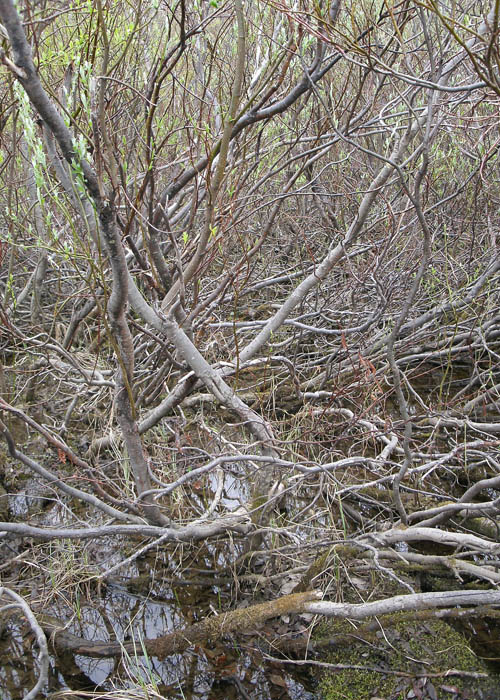 The researchers nicknamed boreal floodplains “mangroves of the North” because there are almost impenetrable tangles of willow trees and roots in places and cyanobacteria are fixing nitrogen like their counterparts in tropical and subtropical mangroves. Image credit: T DeLuca/U of Washington

In the northern regions of the boreal, the surrounding hillsides have thin, infertile soils and lack shrubs or herbs that can fix nitrogen. In these uplands, feather mosses create a microhabitat for cyanobacteria, which fix a modest amount of nitrogen that mostly stays on site in soils, trees and shrubs. Little of it reaches waterways. On the floodplains, high rates of nitrogen fixation occur in thick slimy black mats of cyanobacteria growing in seasonably submerged sediments and coating the exposed roots and stems of willows and sedges.

“We joke and call the floodplains the ‘mangroves of the North’ because there are almost impenetrable tangles of willow tree roots in places, like a micro version of the tropical and subtropical mangroves that are known to harbor highly active colonies of cyanobacteria,” DeLuca said.

“It turns out there’s a lot of nitrogen fixation going on in both,” he said. For example, the 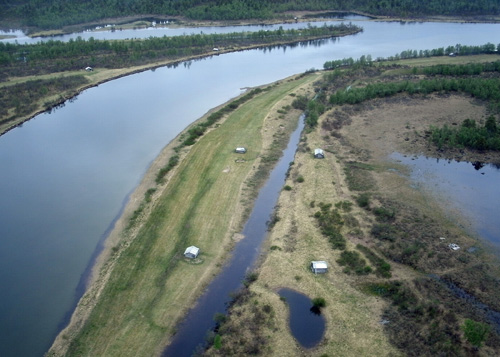 Huts used for storing fodder dot the floodplains, where sedges have been harvested for hundreds of years without additional fertilization. Early settlers cleared willows to encourage and harvest sedges and grasses. Image credit: T DeLuca/U of Washington

scientists discovered that in spite of the dark, cold, snowy winters of Northern Sweden, the cyanobacteria there fix nitrogen at rates similar to those living the life in the toasty, sun-warmed Florida Everglades.

The amount of nitrogen provided by the cyanobacteria to unharvested willows and sedges is perhaps a quarter of what U.S. farmers in the Midwest apply in industrial fertilizers to grain crops and as little as a sixth of what they apply to corn.

Human-made fertilizers can be fuel-intensive to produce and use, for example, it takes the energy of about a gallon of diesel to produce 4 pounds of nitrogen fertilizer. In developing countries in particular, nitrogen fertilization rates are spiraling upward, driving up fossil-fuel consumption, DeLuca said. Meanwhile, cyanobacteria naturally occurring in farm soils aren’t fixing nitrogen at all in the presence of all that fertilizer, they just don’t expend the energy when nitrogen is so readily available, he said.

“Although modest in comparison to modern fertilization, the observation that cyanobacteria could drive the productivity of these boreal floodplain systems so effectively for so long makes one question whether cyanobacteria could be used to maintain the productivity of agricultural systems, without large synthetic nitrogen fertilizer inputs,” he said.

Co-authors on the paper are Olle Zackrisson and Ingela Bergman with the Institute for Subarctic Landscape Research, Sweden, Beatriz Díez with Pontificia Universidad Católica, Chile, and Birgitta Bergman with Stockholm University.

Funding for the work came from the European Regional Development Fund and the Bank of Sweden Tercentenary Foundation.