UCLA researchers report that tiny amounts of a specific type of lipid in the small intestine may play a greater role than previously thought in generating the high cholesterol levels and inflammation that lead to clogged arteries.

The team also found they could reduce the negative effects of these lipids in mice by feeding the animals a new genetically engineered tomato being developed at UCLA that is designed to mimic HDL (“good”) cholesterol.

The study, published in the December issue of the Journal of Lipid Research with an accompanying editorial, focused on a group of lipids found in the small intestine called unsaturated lysophosphatidic acids (LPAs).

“These lipids may be a new culprit that we can target in the small intestine in fighting atherosclerosis,” said senior author Dr. Alan Fogelman, executive chair of the department of medicine and director of the atherosclerosis research unit at the David Geffen School of Medicine at UCLA. 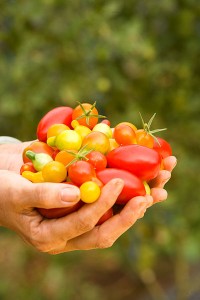 But that may not be the complete story. The UCLA researchers revealed that LPAs, previously considered very minor because they are found in far smaller amounts in the small intestine than other lipids, like cholesterol, may play a more direct role in contributing to the factors that cause atherosclerosis.

When researchers added LPAs at only one part per million (by weight) to the normal low-fat, low-cholesterol mouse chow, they observed the same increase in LPAs in the small intestine as when the mice were fed the high-cholesterol, high-fat diet.

Surprisingly, with the addition of LPAs to the low-fat diet, the UCLA team also found alterations in the patterns of gene expression in the small intestine, changes in cholesterol levels (increases in LDL and decreases in HDL) and increases in blood markers of inflammation typically seen when the mice consumed a high-fat, high-cholesterol diet.

“Recognizing the importance of these minor lipids in the small intestine may lead to ways to reduce their levels and prevent abnormalities in blood levels of ‘good’ and ‘bad’ cholesterol that contribute to heart attack and stroke,” Fogelman said.

The next step was to test the impact of the genetically engineered tomatoes on reducing the effects of these lipids in the small intestine. The tomatoes, created at UCLA, produce a small peptide called 6F that mimics the action of apoA-1, the chief protein in HDL.

They found that this addition to both diets prevented an increase in the level of LPAs in the small intestine and also stopped increases in “bad” cholesterol, decreases in “good” cholesterol and systemic inflammation. Tomatoes that did not contain the peptide had no effect.

According to Fogelman, the peptide-enhanced tomatoes may work in large part by reducing the amount of the LPAs in the small intestine.

Future research will focus on identifying the genes in the small intestine that are altered by the LPAs in order to find signaling pathways that may be targets for treatment.

“Identifying the role of these specific lipids in the small intestine and new ways to target them will hopefully provide new insights and lead to new treatments,” said Judith Gasson, a professor of medicine and biological chemistry, director of UCLA’s Jonsson Comprehensive Cancer Center, and senior associate dean for research at the Geffen School of Medicine.

The study was supported in part by U.S. Public Health Service research grants HL-30568 and HL-34343 and by the Laubisch, Castera and M.K. Grey funds at UCLA. Studies on the determination of 6F in intestinal contents and plasma were partially funded by a Network Grant from the Leducq Foundation.

All of the intellectual property is owned by the UC Regents and managed by the UCLA Office of Intellectual Property and Industry Sponsored Research. The technology is currently licensed exclusively to Bruin Pharma Inc. Authors Alan M. Fogelman, Mohamad Navab and Srinivasa T. Reddy are principals in Bruin Pharma. Fogelman is an officer in the startup company. Other disclosures are available in the manuscript.