Researchers from North Carolina State University have developed new technology and techniques for transmitting power wirelessly from a stationary source to a mobile receiver – moving engineers closer to their goal of creating highway “stations” that can recharge electric vehicles wirelessly as the vehicles drive by.

“We’ve made changes to both the receiver and the transmitter in order to make wireless energy transfer safer and more efficient,” says Dr. Srdjan Lukic, an assistant professor of electrical engineering at NC State and senior author of a paper on the research.

The researchers developed a series of segmented transmitter coils, each of which broadcasts a low-level electromagnetic field. The researchers also created a receiver coil that is the same size as each of the transmitter coils, and which can be placed in a car or other mobile platform. The size of the coils is important, because coils of the same size transfer energy more efficiently. 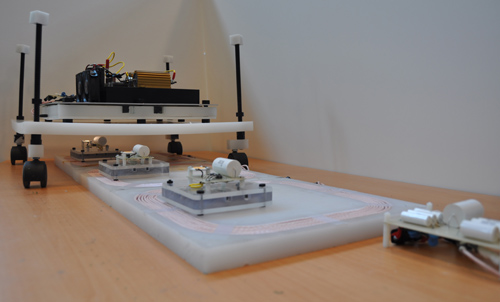 A small prototype serves as a proof of concept for the system. Image credit: North Carolina State University

One previous approach was to use large transmitter coils. But this approach created a powerful and imprecise field that could couple to the frame of a car or other metal objects passing through the field. Because of the magnetic field’s strength, which is required to transfer sufficient power to the receiver, these electromagnetic field “leaks” raised safety concerns and reduced system efficiency.

Another previous approach used smaller transmitter coils, which addressed safety and efficiency concerns. But this approach would require a very large number of transmitters to effectively “cover” a section of the roadway, adding substantial cost and complexity to the system, and requiring very precise vehicle position detection technology.

“We tried to take the best from both of those approaches,” Lukic says.

Lukic and his team have developed a small, functional prototype of their system, and are now working to both scale it up and increase the power of the system.

Currently, at peak efficiency, the new system can transmit energy at a rate of 0.5 kilowatts (kW). “Our goal is to move from 0.5 kW into the 50 kW range,” Lukic says. “That would make it more practical.”