Brittle stars and people have something in common: They move in fundamentally similar ways. Though not bilaterally symmetrical like humans and many other animals, brittle stars have come up with a mechanism to choose any of its five limbs to direct its movement on the seabed. It’s as if each arm can be the creature’s front, capable of locomotion and charting direction. Results appear in the Journal of Experimental Biology.

PROVIDENCE, R.I. [Brown University] — It appears that the brittle star, the humble, five-limbed dragnet of the seabed, moves very similarly to us.

In a series of first-time experiments, Brown University evolutionary biologist Henry Astley discovered that brittle stars, despite having no brain, move in a very coordinated fashion, choosing a central arm to chart direction and then designating other limbs to propel it along. Yet when the brittle star wants to change direction, it designates a new front, meaning that it chooses a new center arm and two other limbs to move. Brittle stars have come up with a mechanism to choose any of its five limbs to be central control, each capable of determining direction or pitching in to help it move.

The findings are published in the Journal of Experimental Biology.

“What brittle stars have done is throw a wrench into the works,” Astley said. “Even though their bodies are radially symmetrical, they can define a front and basically behave as if they’re bilaterally symmetrical and reap the advantages of bilateral symmetry.”

“For an animal that doesn’t have a central brain, they’re pretty remarkable,” said Astley, the sole author of the paper. 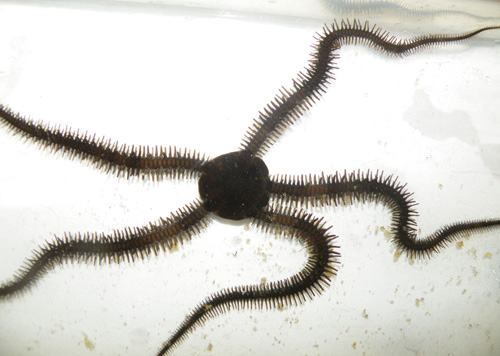 Why bother with turns or pivots? The brittle star doesn’t turn as most animals do. It simply designates another of its five limbs as its new front and continues moving forward. Image credit: Henry Astley/Brown University

Astley decided to study brittle stars after noticing that their appendages acted much like a snake’s body, capable of coiling and unfurling from about any angle. Yet when watched brittle stars move about, he couldn’t figure out how the individual arms were coordinating. “It was too confusing,” said the fourth-year graduate student in the Department of Ecology and Evolutionary Biology. “There’s no obvious front. There are five arms that are all moving, and I’m trying to keep track of all five while the (central body) disc was moving.”

He decided to take a closer look, which, surprisingly, no other scientist had done. On a trip to Belize in January 2009 led by professor and department chair Mark Bertness, Astley plopped thick-spined brittle stars (Ophiocoma echinata) into an inflatable pool and filmed them. The animals were willing subjects. “They hate being exposed,” Astley said, “so we put them in the middle of this sandy area and they’d move.”

To move, brittle stars usually designate one arm as the front, depending on which direction it seeks to go. An arm on either side of the central arm then begins a rowing motion, much like a sea turtle, Astley said. The entire sequence of movement takes about two seconds. “They’re pretty slow in general,” Astley said.

To turn, the brittle star chooses a new center arm and the accompanying rowing arms to move it along. “If we as animals need to turn, we need to not only change the direction of movement, but we have to rotate our bodies,” Astley explained. “With these guys, it’s like, ‘Now, that’s the front. I don’t have to rotate my body disk.’”

Oddly, the brittle star also chooses another type of locomotion — that to bilaterals would appear to be moving backward — about a quarter of the time, Astley documented. In this motion, the animal keeps the same front, but now designates the non-forward-rowing motion limbs to move it. The question, then, is why doesn’t the brittle star define a new front and simply move forward? “There’s clearly something that determines that,” Astley said. “It could be the relative stimulus strength on the arms.”

The research was funded by the private Bushnell Foundation.