Scientific discoveries come through many different means. Breakthroughs can result from purposefully-executed research projects that are perhaps punctuated with unexpected flashes of insight. In rare cases, discoveries occur through a chain of highly improbable, very lucky, occurrences.

I strongly prefer my research team to stay on the first path and use their highly developed scientific skills to guide their efforts towards a rational goal. But dumb luck sometimes does play an essential role, which was true in the discovery of fluoride riboswitches. 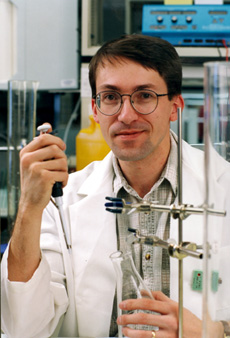 Zasha Weinberg, a research scientist and bioinformatics expert, started the chain of events by uncovering a new collection of RNA molecules and predicted that members of this new class would be riboswitches – a piece of messenger RNA that senses chemicals and regulates the expression of genes. After discovering nearly two dozen other types of riboswitches, my Yale team had become adept at correctly predicting the target each new riboswitch class had evolved to sense. But despite many thoughtful efforts, we simply could not guess the purpose of this new riboswitch.

Research scientist Narasimhan Sudarsan, an expert microbiologist, spent many hours trying to predict the chemical target of this RNA. Normally, the genes controlled by riboswitches provide clues that reveal the RNA target. However, many of the genes associated with this riboswitch had unknown functions.

Sudarsan resorted to wild guesses and ordered chemicals for testing that were made by several different companies. He found compounds from one company always triggered the riboswitch, while the same compounds from another company always failed. We hypothesized that an impurity in the samples from one company was the riboswitch target and the lab set out to identify this unknown chemical.

With a phone call to the second company, we asked them to draw up a list of possible contaminants. We then conducted more tests on some of these molecules, but again all tests were unsuccessful. Interestingly, fluoride was on this short list of contaminants but none of us thought it was worth testing because we did not know that biology cared much about this ion. Even if it did, RNA and fluoride should strongly repel each other because of their negative charges.

Enter chemistry graduate student Jenny Baker. She overcame any biases and ran the mystery sample through a purification process and found that the target had to be an abundant contaminant that was electrically charged. Fluoride was the only chemical on the list that matched this description, and she quickly demonstrated that pure fluoride indeed triggers riboswitch function.

Despite this evidence, we were still unwilling to accept that fluoride was the natural target. Fluoride could be tricking the riboswitch, and if so, the true target was still out there to be found. Two key advances confirmed that fluoride was the natural target. First, research scientist Adam Roth identified a very strange organism that carries 10 fluoride riboswitches while nearly all other bacteria carry only one or two. This organism is known for one unusual characteristic: It feeds on chemicals at an industrial spill site. We now believe that it can eat compounds that carry fluorine and that these compounds release high amounts of fluoride when being digested.

Second, collaborating researchers Chris Miller, professor of biochemistry at Brandeis University and an investigator with the Howard Hughes Medical Institute, and his postdoctoral researcher Randy Stockbridge established that some proteins associated with riboswitches are fluoride transporters. Normally, this type of protein transports chloride ions, which are similar to fluoride.  However, we can predict which protein mutants will transport fluoride by looking to see whether a fluoride riboswitch controls their production.

It is very likely no one would have solved the mystery of fluoride riboswitches for several more decades if we had not been lucky enough to receive a contaminated chemical sample spiked with fluoride. Also, I must praise the members of my research team and our collaborators who had the experience and skill needed to solve this difficult problem that remained hidden in bacteria —despite the fact that fluoride has been used in oral healthcare products for more than 60 years.

Ronald Breaker is the Henry Ford II Professor and chair of the Department of Molecular, Cellular and Developmental Biology; professor of, molecular biophysics and biochemistry; and an investigator with the Howard Hughes Medical Institute.