*Climate changes profoundly influenced the rise and fall of six distinct, successive waves of mammal species diversity in North America over the last 65 million years, shows a novel statistical analysis led by Brown University evolutionary biologists. Warming and cooling periods, in two cases confounded by species migrations, marked the transition from one dominant grouping to the next.*

PROVIDENCE, R.I. [Brown University] — History often seems to happen in waves — fashion and musical tastes turn over every decade and empires give way to new ones over centuries. A similar pattern characterizes the last 65 million years of natural history in North America, where a novel quantitative analysis has identified six distinct, consecutive waves of mammal species diversity or “evolutionary faunas.” What force of history determined the destiny of these groupings? The numbers say it was typically climate change.

“Although we’ve always known in a general way that mammals respond to climatic change over time, there has been controversy as to whether this can be demonstrated in a quantitative fashion,” said Christine Janis, professor of evolutionary biology at Brown University. “We show that the rise and fall of these faunas is indeed correlated with climatic change — the rise or fall of global paleotemperatures — and also influenced by other more local perturbations such as immigration events.”

Specifically, of the six waves of species diversity that Janis and her Spanish collaborators describe online this week in Proceedings of the National Academy of Sciences, four show statistically significant correlations with major changes in temperature. The two transitions that show a weaker but still apparent correlation with the pattern correspond to periods when mammals from other continents happened to invade in large numbers, said Janis, who is the paper’s senior and second author. 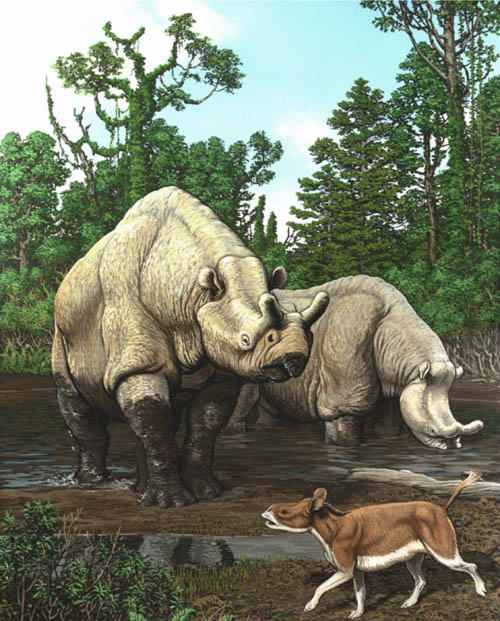 Rhino-like animals. This painting by artist Carl Buell depcits a scene from the late Eocene of North America. The rhino-like animals in the background are brontotheres. The pony-sized Hyracodon, a closer relative of living rhinos, in the foreground. Image credit: Carl Buell

Previous studies of the potential connection between climate change and mammal species evolution have counted total species diversity in the fossil record over similar time periods. But in this analysis, led by postdoctoral scholar Borja Figueirido, the scientists asked whether there were any patterns within the species diversity that might be significant. They were guided by a similar methodology pioneered in a study of “evolutionary faunas” in marine invertebrates by Janis’ late husband Jack Sepkoski, who was a paleontologist at the University of Chicago.

What the authors found is six distinct and consecutive groupings of mammal species that shared a common rise, peak, and decline in their numbers. For example, the “Paleocene fauna” had largely given way to the “early-middle Eocene fauna” by about 50 million years ago. Moreover, the authors found that these transfers of dominance correlated with temperature shifts, as reflected in data on past levels of atmospheric oxygen (determined from the isotopes in the fossilized remains of deep sea microorganisms).

By the numbers, the research showed correlations between species diversity and temperature change, but qualitatively, it also provided a narrative of how the traits of typical species within each wave made sense given the changes in vegetation that followed changes in climate. For example, after a warming episode about 20 million years in the early Miocene epoch, the dominant vegetation transitioned from woodland to a savannah-like grassland. It is no surprise, therefore, that many of the herbivores that comprised the accompanying “Miocene fauna” had high-crowned teeth that allowed them to eat the foods from those savannah sources.

“Such perturbations, related to anthropogenic climatic change, are currently challenging the fauna of the world today, emphasizing the importance of the fossil record for our understanding of how past events affected the history of faunal diversification and extinction, and hence how future climactic changes may continue to influence life on earth,” the authors wrote in the paper.

Grants from the Fulbright program, the Bushnell Foundation (to Brown) and the Spanish Ministry of Science and Innovation funded the research.