Under the microscope, they look like they could be from another planet, but these microscopic organisms inhabit the depths of our oceans in nearly infinite numbers.

To begin to identify where, when, and how much oceanic plankton can be found around the globe, a group of international researchers have compiled the first ever global atlas cataloguing marine plankton ranging in size from bacteria to jellyfish. The atlas was published on July 19, 2013, in a special issue of the journal Earth System Science Data.

The atlas, known as the Marine Ecosystem Biomass Data (MAREDAT), is the first step towards a comprehensive inventory of the marine biota based on counts of individual cells or organisms. It will help researchers better understand marine biodiversity for conservation and monitoring and is the result of collaborations between scientists at the Woods Hole Oceanographic Institution (WHOI), the University of East Anglia, ETH Zurich, University of Manchester, Université d’Angers and CNRS, the US National Oceanic and Atmospheric Administration (NOAA), together with many other scientific institutions around the world.

“One of the more surprising findings from the study is that phytoplankton and zooplankton biomass are roughly the same size in the upper ocean. Compare that to more familiar land ecosystems where the biomass of plants greatly exceeds that of animals and it’s pretty illuminating,” says WHOI Senior Scientist and Marine Chemist Scott Doney, a collaborator on the project. 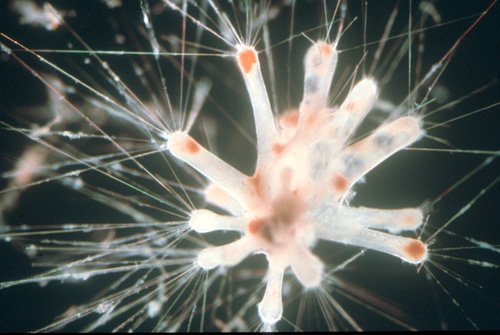 The MAREDAT database is open-source and available through a public website.

Thus far, it has catalogued about half a million measurements of plankton biomass, which are subdivided into 12 broad plankton groups. Each group has a separate database.

“The data and documentation can be downloaded by any researcher so that they can explore their own scientific questions,” Doney says. “Over time we hope to grow the database by adding other historical and newly collected data for plankton groups already in the database as well as extend into different plankton groups.” 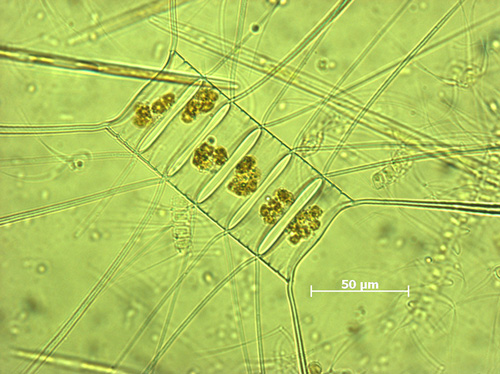 One group of microorganisms Doney and his colleague Yawei Luo have focused on cataloguing in MAREDAT is marine nitrogen-fixing bacteria called “diazotrophs.” These unique microbes can literally make the nutrients they need for growth out of thin air, or at least from dissolved nitrogen gas. They play an essential role in subtropical ocean gyres providing a source of nitrogen in the otherwise nutrient-poor surface waters. The nitrogen fixation rates and diazotroph cell counts are being used to study the environmental conditions that determine nitrogen fixation and diazotroph community structure.

Working with more than 45 other scientists from WHOI and around the world, Luo and Doney built the first-ever global dataset on nitrogen-fixers by collecting data from historical scientific literature and existing databases. The past decade has seen a virtual explosion in new ocean field data on marine nitrogen-fixers spanning a wide range of taxonomic groups including free-living cells and filamentous organisms as well as symbiotic organisms that live inside other plankton. Luo and Doney study ocean microbes as part of the Center for Microbial Oceanography, Research, and Education (C-MORE), a National Science Foundation Science and Technology Center based at the University of Hawaii.

The first edition of the MAREDAT global plankton atlas took three years to compile and combines information from half a million data points. The data will have a wide-range of application across ocean and climate science including helping scientists create computer models to predict the impact of climate change and ocean acidification. 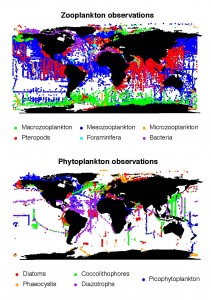 The authors hope that the MAREDAT atlas will be a starting point to expand from and will help serve under-sampled regions, such as the South Pacific and parts of the Southern Ocean. The MAREDAT global atlas is published as a special edition of the journal Earth System Science Data.