Santa’s workshop at the North Pole is not under water, despite recent reports. A dramatic image captured by a University of Washington monitoring buoy reportedly shows a lake at the North Pole. But Santa doesn’t yet need to buy a snorkel.

“Every summer when the sun melts the surface the water has to go someplace, so it accumulates in these ponds,” said Jamie Morison, a polar scientist at the UW Applied Physics Laboratory and principal investigator since 2000 of the North Pole Environmental Observatory. “This doesn’t look particularly extreme.”

After media coverage in CBS News, The Atlantic and the U.K.’s Daily Mail, Morison returned from overseas travel late last week to a pile of media inquiries. Over the weekend the team posted an explanatory page on the project website.

One of the issues in interpreting the image, researchers said, is that the camera uses a fisheye lens.

“The picture is slightly distorted,” said Axel Schweiger, who heads the Applied Physics Laboratory’s Polar Science Center. “In the background you see what looks like mountains, and that’s where the scale problem comes in – those are actually ridges where the ice was pushed together.” 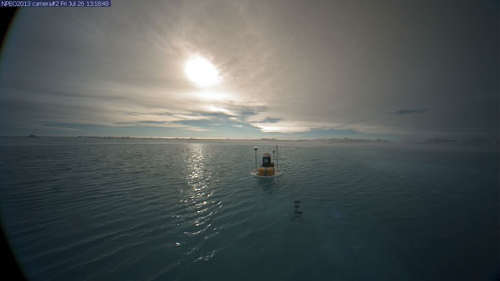 Researchers estimate the melt pond in the picture was just over 2 feet deep and a few hundred feet wide, which is not unusual to find on an Arctic ice floe in late July.

In the midst of all the concern, the pool drained late July 27. This is the normal cycle for a meltwater pond that forms from snow and ice — it eventually drains through cracks or holes in the ice it has pooled on.

The now-infamous buoy was first plunked into floating ice in April, at the beginning of the melt season, about 25 miles from the North Pole. Morison drilled a hole about three football fields away for a second camera, which is pointing in a different direction and shows a more typical scene. Since then the ice floe holding both cameras has drifted about 375 miles south.

The U.S. National Science Foundation has funded an observatory since 2000 that makes yearly observations at fixed locations and installs 10 to 15 drifting buoys.

The buoys record weather, ice, and ocean data, and the webcams transmit images via satellite every 6 hours. Images show the ice, buoys and yardsticks placed in the snow to track the surface conditions throughout the summer melt season. Maybe the instruments will survive the summer without getting crushed by shifting ice to record data for another year. Maybe they will fall in the water and eventually wash ashore. Researchers place the buoys to try to maximize their useful lifetime.

While researchers say the so-called lake at the North Pole is not out of the ordinary, there is a lot of meltwater that could affect the sea ice in coming weeks, in the closely watched lead-up to the September ice minimum. 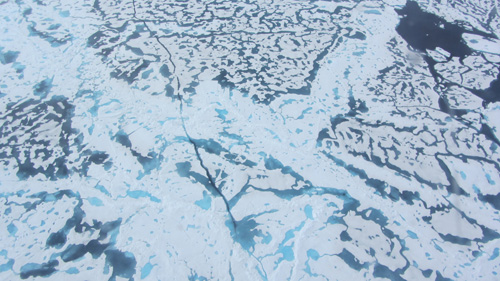 Last summer the sea-ice hit a record low in extent since measurements began in 1979. This year the melting started a bit later than usual, Schweiger said, but picked up in the last couple of weeks. Late summer is usually the strongest period of shrinking because the ice is already thin.

“Whether we’re going to see another record or not is still up in the air,” Schweiger said.

He flew over the ice last month in a joint project with the U.S. Coast Guard to drop instruments that measure oceanic and atmospheric conditions and ice motion.

Morison was last on the ice in April when he deployed the buoys. His forecast for this summer, based on years of experience, is included on a list of expert predictions compiled by the National Atmospheric and Oceanic Administration’s Seattle office.

Morison will not change his June estimate that this summer will come close to, but not pass, the 2012 record, but he is having his doubts. Looking at the photos from the recent flyover shows more melt along the Alaskan coast, and his experience suggests that ice is fragile.

“I think it’s going to be pretty close to last year,” Morison said. “Up in the Canada Basin the ice looks like Swiss cheese, with lots of holes. Even though the ice extent is pretty good, our thinking is that if there’s a big storm event we’re going to see a rapid breakup of that ice and it’s going to disappear pretty quickly.”

The UW team manages another sea-ice tracking tool. The U.S. National Snow and Ice Data Center publishes daily images and calculations of sea-ice extent and area, while the UW group combines those satellite images and other data to tabulate sea-ice volume. For many people, the UW’s monthly updates are a go-to source for getting the latest numbers on sea ice.

“While the hoopla about Santa’s swimming pool was off the mark,” Morison said, “it is the long-term observational record from these buoys that provides the perspective needed to understand what really is going on.”