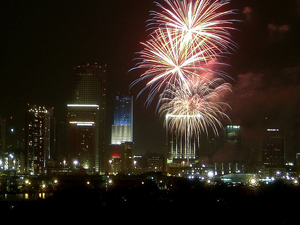 Fireworks can be spectacular. However, the gas and smoke produced by the colorful explosions carry extremely high levels of toxic particles, according to a study by Audrey Smargiassi, a professor at the Université de Montreal Department of Environmental and Occupational Health.

Smargiassi conducted one of the first studies examining the composition of the emitted gases and the concentration of the particles. In addition, her study is unique as she collected her data below the fireworks display where spectators usually stand. Previous studies usually collected data from nearby rooftops.

The study was conducted in 2007 during nine separate shows presented at La Ronde amusement park where 5.7 million spectators attend an international fireworks competition every summer.

“We analyzed particles of 2.5 micrometers or less, most of which were about 1 micrometer,” says Smargiassi. “These particles are about the size of bacteria and remain suspended in the air a long time before falling to the ground. The smaller they are, the more likely they are to find their way into the respiratory system.”

The particles in question are mostly potassium, manganese, titanium, chlorine and aluminum. The question is can these elements cause health problems?

According to Smargiassi, there is a risk for people suffering from respiratory problems. In fact, the amusement park has signs recommending that people suffering from such problems leave the park during the show. However, Smargiassi believes that people with cardiovascular diseases such as arrhythmia, ischemia, or a history of heart attacks should also avoid the smoke from fireworks.

Previous studies have shown that regular exposure to such contaminants can increase the likelihood of heart troubles. She insists that people shouldn’t avoid fireworks but people with certain health problems should be cautious.