Gender disparity in journalism still exists, but is improving

COLUMBIA, Mo. ­—The Pulitzer Prize in Journalism is one of the world’s most prestigious awards. Despite progress in the last few decades, gender disparities in the field of journalism have existed as long as the profession has. Now, a University of Missouri researcher has found that female Pulitzer Prize winners are more likely to have greater qualifications than their male counterparts in order to win the coveted award.

In a study to be published in Journalism and Mass Communication Quarterly, Yong Volz, an assistant professor of journalism studies in the MU School of Journalism, along with Francis Lee of the Chinese University of Hong Kong, studied biographical data from all 814 historical winners of the Pulitzer Prize from 1917 to 2010. They found that the majority of the 113 female Pulitzer Prize winners enjoyed access to greater resources than the average male winner. 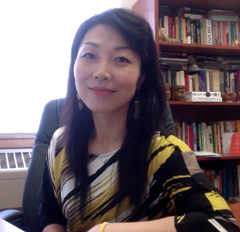 Yong Volz is an assistant professor of journalism studies in the MU School of Journalism. Image credit: University of Missouri

“When facing a general gender disadvantage, women journalists have had to rely on greater resources than their male counterparts to achieve equal success,” Volz said. “Beyond talent and hard work, majoring in journalism, earning a graduate degree, a metropolitan upbringing, and employment with an elite publication such as the New York Times were among the things females needed to achieve this highest professional recognition. Male winners have not necessarily had to possess such high qualifications in order to win.”

Volz divided the Pulitzer Prize winners into three historical periods: the exclusionary period (1917-1951), the compensational equality period (1952-1990), and the formal equality period (1991-2010). During the exclusionary period, only two prize winners were female, the first coming in 1937. Volz saw an increase of female winners after the 1950s through the 1980s, but those winners were more likely to have higher credentials compared to their male counterparts in order to compensate for gender disadvantage For women who did not possess additional qualifications, however, they had a better chance to win a Pulitzer only when working in teams and/or working on local reporting and in-depth reporting. Volz was somewhat encouraged to find that since 1991, there has been no significant statistical difference between male and female winners in their credentials. She says that these findings show gender differences in the type of awards also no longer exist.

“While there have been significant improvements, gender disadvantage has not completely disappeared from the journalism field,” Volz said. “Even after 1991, only 27 percent of all Pulitzer winners in journalism were females, which is lower than the percentage of females in American newsrooms, which stands at about 33 percent. In other words, while the field of journalism has become relatively more open to women, they still face more difficulties achieving career advancement. Being a woman is not only a disadvantage when entering the field, but also when it comes to gaining professional recognition within the field.”

Volz’s findings are not exclusive to female Pulitzer Prize winners. In another article recently published in Journalism: Theory, Practice & Criticism, Volz found that compared with local reporting awardees of the Pulitzer, winners of the most elite category of international reporting are more likely to be born or raised in a foreign country or in a major U.S. metropolitan city, and more likely to be graduates of Ivy League institutions.

“Having an Ivy League education and being a cosmopolite not only carries a cachet and privilege in American society, but it also constitutes an advantage that spills over to the journalistic industry,” Volz said. “Individuals with these functionally relevant resources have better prospects of entering the prestigious field of international reporting at top news organizations. This in turn helps normalize the selective process and maintain the prestige system in journalism, which then further reinforce social stratification within society in general.”