Fears of a Decline in Bee Pollination Confirmed by U of T Research: May be due to Climate Change

Widespread reports of a decline in the population of bees and other flower-visiting animals have aroused fear and speculation that pollination is also likely on the decline. A recent University of Toronto study provides the first long-term evidence of a downward trend in pollination, while also pointing to climate change as a possible contributor.

“Bee numbers may have declined at our research site, but we suspect that a climate-driven mismatch between the times when flowers open and when bees emerge from hibernation is a more important factor,” said Professor James Thomson, a scientist with U of T’s Department of Ecology and Evolutionary Biology. 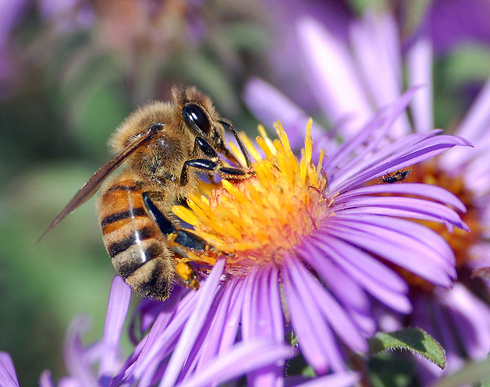 Thomson’s 17-year examination of the wild lily in the Rocky Mountains of Colorado is one of the longest-term studies of pollination ever done. It reveals a progressive decline in pollination over the years, with particularly noteworthy pollination deficits early in the season. The study appears this week in Philosophical Transactions of the Royal Society B: Biological Sciences.

Three times each year, Thomson compared the fruiting rate of unmanipulated flowers to that of flowers that are supplementally pollinated by hand. “Early in the year, when bumble bee queens are still hibernating, the fruiting rates are especially low,” he said. “This is sobering because it suggests that pollination is vulnerable even in a relatively pristine environment that is free of pesticides and human disturbance but still subject to climate change.”

Thomson began his long-term studies in the late 1980s after purchasing a remote plot of land and building a log cabin in the middle of a meadow full of glacier lilies. His work has been supported by the U.S. National Science Foundation and the Natural Sciences and Engineering Research Council of Canada.