Palo Alto, CA — By integrating satellite mapping, airborne-laser technology, and ground-based plot surveys, scientists from the Carnegie Institution’s Department of Global Ecology, with colleagues from the World Wildlife Fund and in coordination with the Peruvian Ministry of the Environment (MINAM), have revealed the first high-resolution maps of carbon locked up in tropical forest vegetation and emitted by land-use practices.

These new maps pave the way for accurate monitoring of carbon storage and emissions for the proposed United Nations initiative on Reduced Emissions from Deforestation and Degradation (REDD). The study is published in the September 6, 2010, early edition of the Proceedings of the National Academy of Sciences.

The United Nations REDD initiative could create financial incentives to reduce carbon emissions from deforestation and degradation. However, this and similar carbon monitoring programs have been hindered by a lack of accurate, high-resolution methods to account for changes in the carbon stored in vegetation and lost through deforestation, selective logging, and other land-use disturbances. The new high-resolution mapping method will have a major impact on the implementation of REDD in tropical regions around the world. 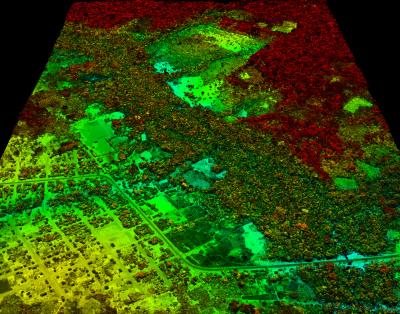 About the image: A new high-resolution airborne and satellite mapping approach provides detailed information on carbon stocks in Amazonia. This image shows an area of road building and development adjacent to primary forest in red tones, and secondary forest regrowth in green tones. Image credit: Image from the Carnegie Airborne Observatory, Carnegie Institution for Science

The study covered over 16,600 square miles of the Peruvian Amazon — an area about the size of Switzerland. The researchers used a four-step process: They mapped vegetation types and disturbance by satellite; developed maps of 3-D vegetation structure using a LiDAR system (light detection and ranging) from the fixed-wing Carnegie Airborne Observatory; converted the structural data into carbon density using a small network of field plots on the ground; and integrated the satellite and LiDAR data for high-resolution maps of stored and emitted carbon. The scientists combined historical deforestation and degradation data with 2009 carbon stock information to calculate emissions from 1999-2009 for the Madre de Dios region.

“We found that the total regional forest carbon storage was about 395 million metric tons and emissions reached about 630,000 metric tons per year,” explained lead author Greg Asner. “But what really surprised us was how carbon storage differed among forest types and the underlying geology, all in very close proximity to one another. For instance, where the local geology is up to 60 million years old, the vegetation retains about 25% less carbon than the vegetation found on geologically younger, more fertile surfaces. We also found an important interaction between geology, land use, and emissions. These are the first such patterns to emerge from the Amazon forest.”

The scientists also found that the paving of the Interoceanic Highway, combined with selective logging and gold mining, caused an increase of deforestation emissions of more than 61% by 2009, while degradation emissions doubled. Forest degradation increased regional carbon emissions by 47% over deforestation alone. However, the researchers were able to detect an 18% offset to these regional emissions in forests regrowing on previously cleared and now abandoned lands.

Members of the Peruvian government participated throughout the research process to familiarize themselves with the new method. In doing so, they aimed to assess the method’s advantages, evaluate deforestation and forest disturbance, and determine carbon stocks in an environmentally critical area of Madre de Dios, Peru. “A valuable opportunity has opened for MINAM to count on Carnegie’s scientific and technical support. This will strengthen our ability to monitor the Amazon forest, build experience in improving the interpretation of the country’s environmental and land management conditions, and contribute to the establishment of the REDD mechanism,” says Doris Rueda, director of Land Management at MINAM.

To support REDD, the Intergovernmental Panel on Climate Change (IPCC) issued baseline carbon density estimates for different biomes of the world, while also encouraging higher resolution approaches. When used for the Peruvian study area, the IPCC baseline estimate for carbon storage is 587 million metric tons. Based on the new Carnegie approach, the estimated total is 395 million metric tons. Under REDD-type programs, however, the high-resolution accuracy of the new approach would yield more credit per ton of carbon, thereby providing financial incentives for slowing deforestation and degradation.

Carnegie scientists are expanding their demonstration and training efforts in the high-resolution mapping technique with the governments of Ecuador and Colombia.

The research was supported by the Government of Norway, the Gordon and Betty Moore Foundation, the W. M. Keck Foundation, and William R. Hearst III.