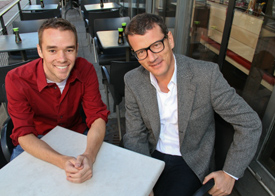 Race may not be as important as previously thought in determining who buddies up with whom, suggests a new UCLA–Harvard University study of American college students on the social networking site Facebook.

“Sociologists have long maintained that race is the strongest predictor of whether two Americans will socialize,” said Andreas Wimmer, the study’s lead author and a sociologist at UCLA. “But we’ve found that birds of a feather don’t always flock together. Whom you get to know in your everyday life, where you live, and your country of origin or social class can provide stronger grounds for forging friendships than a shared racial background.”

In fact, the strongest attraction turned out to be plain, old-fashioned social pressure. For the average student, the tendency to reciprocate a friendly overture proved to be seven times stronger than the attraction of a shared racial background, the researchers found.

“We both were surprised by the strength of social pressure to return friendships,” said Lewis. “If I befriend you, chances are that you’re going to feel the need to balance things out and become my friend, and often even the friend of my friends.”

The findings appear in the current issue of the American Journal of Sociology, which is expected to publish online early this week.

Other mechanisms that proved stronger than same-race preference included having attended an elite prep school (twice as strong), hailing from a state with a particularly distinctive identity such as Illinois or Hawaii (up to two-and-a-half times stronger) and sharing an ethnic background (up to three times stronger).

Even such routine facts of college life as sharing a major or a dorm often proved at least as strong, if not stronger, than race in drawing together potential friends, the researchers found. Sharing a dorm room, for example, proved to be one of the strongest formulas for friendship formation, ranking only behind the norm of reciprocating friendship as a friendship-forging force.

When they hit on the idea of using Facebook to study social networks, Wimmer, Lewis and colleagues at Harvard were looking for a way to study a network of friendships as it developed. They set their sights on freshmen of the class of 2009 at an unidentified university with a high participation rate on the social networking site. In addition to being highly selective, the university attracts students from diverse racial and ethnic backgrounds.

“Given the school’s high admission standards, it was highly unlikely that these freshmen were going be enrolling with their high school buddies,” Wimmer said. “Most of these relationships were developing from scratch.”

The university’s approach to housing also lent itself to a study of friendship forces beyond race. Freshmen of different racial backgrounds are assigned to share rooms at a higher frequency than would be expected under random conditions, suggesting an institutional commitment to racial diversity in housing.

Even though 97 percent of the class’s 1,640 students set up Facebook profiles, Wimmer and Lewis decided not to focus on the social networking site’s most basic indicator of a social connection — its “friend” feature, by which students send a request to others on the network to become friends.

“We were trying to go for a stronger measure of friendship than just clicking a link and connecting with someone over the Web,” Lewis said.

So the researchers followed the 736 freshmen who posted photos of fellow classmate-friends and then took the additional step of “tagging” the photos with those classmates’ names, a step that causes the photos to be displayed on the friends’ Facebook profiles.

“Tagged photos are by-products of people who obviously spent time together in real-life social settings,” Wimmer said. “They’re an echo of a real interaction that students also want to have socially recognized. They’re not like some online communication that only occurs over the Web.”

Wimmer and Lewis scrupulously tracked the tagged photos as the freshmen posted them, at an average rate of 15 unique “picture friends” per student. Armed with housing information supplied by the university and personal details posted on profiles, the researchers then set out to statistically analyze dozens of characteristics shared by the freshmen who tagged each other.

While the research was approved by Facebook, the researchers did not receive special permission to bypass privacy settings and only used information that could be seen by other students at the same university. The researchers determined each study subject’s race based on photos and last names. They gathered additional information on each student’s ethnic background; tastes in movies, music, and books; their home state, major and housing; and the types of high schools they attended.

But when the researchers dug deeper, race appeared to be less important than a number of other factors in forging friendships.

Much of what at first appeared to be same-race preference, for instance, ultimately proved to be preference for students of the same ethnic background, Wimmer and Lewis found. This was especially the case for Asian students, who befriended each other nearly three times more frequently than would be expected if relationships were formed on the basis of chance. But once the researchers started controlling for the attraction of shared ethnic backgrounds or countries of origin, the magnitude of racial preference was cut almost in half. The appeal of shared ethnicity was strongest for Vietnamese freshmen, who befriended each other at three times the rate that average students befriended each other on the basis of a shared racial background.

“Two students with the same racial background can also become friends because they follow norms of how to make friends, not only because of racial preference,” Wimmer said. “If only to avoid tensions in one’s social circles, friendships are often returned and friends of friends tend to become friends among themselves.”

Controlling for the types of high schools attended by the freshmen also produced telling results. Alumni of the nation’s “select 16” college preparatory schools were twice as likely to form friendships as were freshmen who shared the same race, suggesting that the distinction between elite and non-elite families is a higher hurdle to friendship than race.

While the researchers insist that their findings cannot be interpreted to show that racism and racial discrimination isn’t still a problem in America, they believe that past research might have exaggerated the role of race in social relationships, not the least because data on race is readily available in existing datasets while information on other background characteristics or on student activities is much harder to come by.

Their study exemplifies a new trend in social science research to mine data from social networking sites to study human behavior, including relationships, identity, self-esteem, popularity and political engagement.

“Facebook data on college students allowed us to peer behind race categories to see what other commonalities might possibly be at work in drawing together potential friends,” Wimmer said. “It’s a natural experiment in mixing people from all over the country and seeing how they behave in this new environment.”