Exploring the Ocean in Our Brains with Jaron Lanier

*Jaron Lanier has spent decades thinking about technology and the ways we use – and misuse – it. He also has been thinking long and hard about using avatars to access the untapped potential of our brains.*

REDMOND, Wash. – Nov. 9, 2011 – One evening last November, Jaron Lanier queued up outside a video game store in California and counted down the minutes until he could buy Kinect for Xbox 360. Lanier – a technologist, computer scientist, composer, and one of Time magazine’s “100 Most Influential People of 2010 – was just as excited to get his hands on Microsoft’s motion-sensing camera as the other gamers in line, most of whom he quickly realized were half his age. He was only slightly embarrassed by the observation.

“As a grownup and as a father I can’t believe I did that,” said Lanier, a partner architect for Microsoft Research. “But I was just so amazed it was really happening.”

He had been waiting for that moment for a long time. At Microsoft Research he had consulted for years on the project that ultimately became Kinect. But in a sense the story goes back much further. Lanier has spent decades scouting the frontier of human-machine interaction. In a Silicon Valley garage 30 years ago, he and some friends became the first avatars – movable representations of themselves in cyberspace. He has watched the computer science industry’s adventures with avatars crawl along ever since. 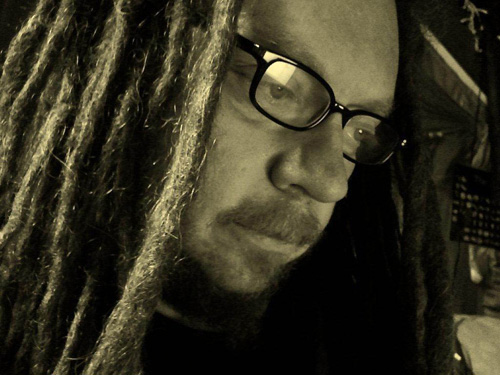 Lanier sees Kinect as a breakthrough for those adventures, a rare instance where consumer technology leaps past what is happening in research labs. And that was precisely why he decided to join Microsoft in 2006 as a scholar at large in spite of what he calls “a long history of not holding down a real job.”

“This is the only operation in the world of any kind – public, private or otherwise – where some of the things that I’ve dreamed about could actually be brought out into the world,” he said. “That’s extraordinary.”

Expanding the Way We Think

Lanier’s been dreaming about technology for a long time. As every profile or news article about him mentions, he coined the term “virtual reality” back in the 1980s. It’s now entered the vernacular. “By my reckoning there’s been more virtual reality than sex in movies for a decade,” he quipped. 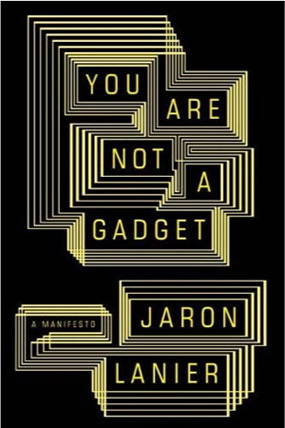 Jaron Lanier's “You are Not a Gadget: A Manifesto” explored the power and limitations of human interaction in a socially networked world. Image credit: Microsoft

Still, it’s difficult for him to define what the term means today, or say whether those early visions have come true. Virtual reality has probably had its biggest success as an industrial technology, Lanier said: surgeons routinely practice procedures through simulators, and you can’t buy a car today that hasn’t been prototyped in virtual reality.

But the experiences Lanier and his friends had in a garage 30 years ago – transforming themselves into avatars in immersive environments – haven’t become commonplace. That’s because for years one needed to don a bulky bodysuit to become an avatar. Kinect changed that overnight, Lanier said. Its camera can instantly capture what the body is doing and map that to an avatar.

It’s too early to imagine all the possibilities Kinect will unleash, but Lanier believes it’s the start of something profound. What’s really exciting for him isn’t the ability to see yourself in an immersive 3D environment – it’s the fact that you yourself change. He wrote in the Wall Street Journal that “Kinect represents a new wave of technology that has the potential to expand the way we think.” Ask him what he means, and he’ll start talking excitedly about nonhuman avatars and somatic cognition. (Somatic means “of the body” – Lanier often apologizes when he tries to explain it in the context of his research. “Even when I have lots of space to write about it, it’s still hard,” he said.)

Essentially, he believes there’s some kind of untapped potential in the brain that we might be able to access when we play with non-realistic avatars. One possible area of application is education, where students could transform themselves into a molecule during a chemistry lesson, for example, or become a triangle to study geometry.

“What I’m trying to figure out is if there’s another channel to intelligence, if there’s this whole other ocean in our brains waiting to be explored,” he said. “That’s the long-term topic I’m really interested in exploring, and I think Kinect could be the first step toward understanding it.”

Lanier is many things – computer scientist, musician, author – but he is not a machine. Last year he wrote a book reminding everyone that they aren’t either. It caused a bit of a stir.

“You are Not a Gadget: A Manifesto” explored the power and limitations of human interaction in a socially networked world. Lanier believes deeply in the promise of the Internet, but he laments the way we’re using it today. The book’s chief target was Web 2.0 and what Lanier sees as its celebration of online collectivism. Lanier believes Web 2.0 principles of collaboration and sharing have spawned what he calls “digital Maoism,” where the individual is trumped by collective groupthink, content creators can’t make a buck, and open forums are taken over by rampaging, anonymous mobs.

He’s particularly critical of the belief that all content on the Web should be free. He contrasts that view with the PC revolution of the past few decades, which he says helped create wealth for tons of people. Today many people champion the advertising model that in his mind is “the computational equivalent of heroin.”

“The notion that it was OK to look to PCs as a way to make living but you shouldn’t expect the same from the Internet is a total abrogation of our duty to society,” he said. “And I really feel if this sort of advertising model of the Internet hadn’t become so dominant around turn of century, I think we would have created enough new wealth in the middle classes to avoid the recession we’re going through.”

Lanier instead advocates a form of computing he calls techno-humanism, where the individual is celebrated and the Internet offers a path to creativity and economic growth. He wants Web designers and network engineers to think about ways to value people over information.

“I think there has to be this kind of reemphasis of a sacred faith in people being special that has to be emphasized over and over again at every level of computation, both in the user experience and the way networks are designed,” he said. “Because if computers provide this other worldview where everything is just information, computation can sort of erase people.”

The Technologist as Skeptic

In the wake of “You Are Not a Gadget,” some people read Lanier’s views as “anti-technology.” He waves off the charge. Lanier believes a critical component of his work as a technologist is taking a hard look at the ways we use – and misuse – technology.

“I think it’s hucksterism to be working on technology without also being a skeptic or being cautionary about how to misuse it,” he said. “So I view being a critic, being tough on us, on myself, on our technology, as part of my responsibility of being a technologist.”

Perhaps unsurprisingly, Lanier is a prolific writer; in addition to his books, he frequently writes op-eds that appear in publications such as the Wall Street Journal and the New York Times. He views that public life as essential to who he is, and before he joined Microsoft he made sure that the company was OK with the fact that he spoke his mind frequently.

“I asked what if I say something that upsets someone at Microsoft?” he said. “They said ‘we’re grownups, we’ll live.’ I thought that was great.”

So as he researches the future of computing at Microsoft Research, he’ll also sound the alarm whenever he sees technology take what he feels is a wrong turn. But despite that skeptical eye, he firmly believes technology is essential to humanity’s future. He bemoans the dystopian visions Hollywood typically offers when it portrays technology in the coming decades. Lanier himself has dabbled in the movies; he was an advisor on 2001’s “Minority Report.” As much as he enjoyed the experience, he disagreed strongly with the film’s “back-to-nature” ending.

“You can’t turn against technology to find a meaningful future,” he said. “If that’s what you think is a happy ending, we’re all going to starve to death.”

At the end of the day, Lanier proclaims he is an optimist. He believes technology is our hope for a better tomorrow.

“Of course I’m an optimist – otherwise, what are you doing here?” he said. “Find yourself another planet if you don’t want to be optimistic about this one. We’ve hit the limits of the earth as we understand it, and now the pressure is on technologists to come through. And I believe we will.”