Experiment Would Test Cloud Geoengineering as Way to Slow Warming

Even though it sounds like science fiction, researchers are taking a second look at a controversial idea that uses futuristic ships to shoot salt water high into the sky over the oceans, creating clouds that reflect sunlight and thus counter global warming.

University of Washington atmospheric physicist Rob Wood describes a possible way to run an experiment to test the concept on a small scale in a comprehensive paper published this month in the journal Philosophical Transactions of the Royal Society.

The point of the paper — which includes updates on the latest study into what kind of ship would be best to spray the salt water into the sky, how large the water droplets should be and the potential climatological impacts — is to encourage more scientists to consider the idea of marine cloud brightening and even poke holes in it. In the paper, he and a colleague detail an experiment to test the concept.

“What we’re trying to do is make the case that this is a beneficial experiment to do,” Wood said. With enough interest in cloud brightening from the scientific community, funding for an experiment may become possible, he said. 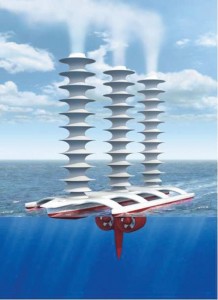 A conceptualized image of an unmanned, wind-powered, remotely controlled ship that could be used to implement cloud brightening. Image credit: John McNeill

The theory behind so-called marine cloud brightening is that adding particles, in this case sea salt, to the sky over the ocean would form large, long-lived clouds. Clouds appear when water forms around particles. Since there is a limited amount of water in the air, adding more particles creates more, but smaller, droplets.

“It turns out that a greater number of smaller drops has a greater surface area, so it means the clouds reflect a greater amount of light back into space,” Wood said. That creates a cooling effect on Earth.

Marine cloud brightening is part of a broader concept known as geoengineering which encompasses efforts to use technology to manipulate the environment. Brightening, like other geoengineering proposals, is controversial for its ethical and political ramifications and the uncertainty around its impact. But those aren’t reasons not to study it, Wood said.

“I would rather that responsible scientists test the idea than groups that might have a vested interest in proving its success,” he said. The danger with private organizations experimenting with geoengineering is that “there is an assumption that it’s got to work,” he said.

Wood and his colleagues propose trying a small-scale experiment to test feasibility and begin to study effects. The test should start by deploying sprayers on a ship or barge to ensure that they can inject enough particles of the targeted size to the appropriate elevation, Wood and a colleague wrote in the report. An airplane equipped with sensors would study the physical and chemical characteristics of the particles and how they disperse.

The next step would be to use additional airplanes to study how the cloud develops and how long it remains. The final phase of the experiment would send out five to 10 ships spread out across a 100 kilometer, or 62 mile, stretch. The resulting clouds would be large enough so that scientists could use satellites to examine them and their ability to reflect light.

Wood said there is very little chance of long-term effects from such an experiment. Based on studies of pollutants, which emit particles that cause a similar reaction in clouds, scientists know that the impact of adding particles to clouds lasts only a few days.

Still, such an experiment would be unusual in the world of climate science, where scientists observe rather than actually try to change the atmosphere.

Wood notes that running the experiment would advance knowledge around how particles like pollutants impact the climate, although the main reason to do it would be to test the geoengineering idea. 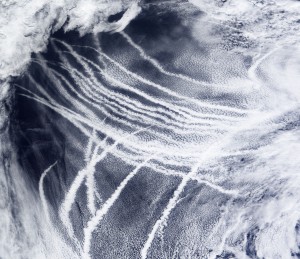 A satellite image shows the trails left behind by ships as they cross the Pacific Ocean. Image credit: NASA

A phenomenon that inspired marine cloud brightening is ship trails: clouds that form behind the paths of ships crossing the ocean, similar to the trails that airplanes leave across the sky. Ship trails form around particles released from burning fuel.

But in some cases ship trails make clouds darker. “We don’t really know why that is,” Wood said.

Despite increasing interest from scientists like Wood, there is still strong resistance to cloud brightening.

“It’s a quick-fix idea when really what we need to do is move toward a low-carbon emission economy, which is turning out to be a long process,” Wood said. “I think we ought to know about the possibilities, just in case.”

The authors of the paper are treading cautiously.

“We stress that there would be no justification for deployment of [marine cloud brightening] unless it was clearly established that no significant adverse consequences would result. There would also need to be an international agreement firmly in favor of such action,” they wrote in the paper’s summary.

There are 25 authors on the paper, including scientists from University of Leeds, University of Edinburgh and the Pacific Northwest National Laboratory. The lead author is John Latham of the National Center for Atmospheric Research and the University of Manchester, who pioneered the idea of marine cloud brightening.

Wood’s research was supported by the UW College of the Environment Institute.