Acclaimed Chinese-American author Ha Jin came to the United States almost 30 years ago as neither immigrant nor exile, but he experienced elements of both as he struggled to establish a personal identity and carve out a place for himself in the literary world.

On Thursday, March 7, close to 300 people turned out to hear the award-winning writer share his perspective on the contemporary immigrant experience. The lecture was part of a visiting writers series, Transnational Encounters: World-Renowned Authors at the University of Delaware.

The difference between the exile and the immigrant, Jin said, is that the exile’s view of the world is shaped by an important moment in the past, while the immigrant is focused on creating a better life for himself and his family by starting over in a new place.

Born in China in 1956, Jin became a member of the People’s Liberation Army at the age of 14. In 1986, he came to the U.S. to study at Brandeis University, fully intending to return to China after finishing his graduate work.

But the 1989 Tiananmen Square massacre altered the political and social landscape in China and changed Jin’s mind.

“The Chinese Army had been the people’s Army,” Jin said, “and suddenly everything was reversed. I couldn’t accept that the same Army was now suppressing the citizens.” 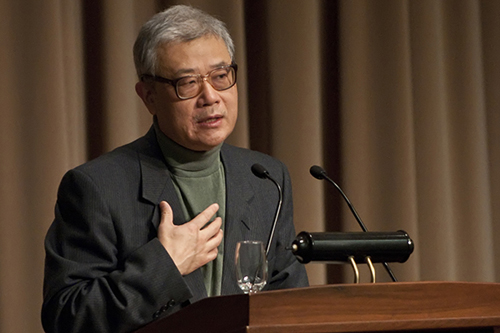 He decided to stay in America to protect his son from the pointless violence in his home country, but the decision was accompanied by fear — an emotion common to both immigrants and exiles, according to Jin.

“Gradually, though, I came to see that this kind of emotion is part of the human condition,” he said. “It’s also the cost of freedom and the source of opportunity.”

After Jin earned his Ph.D. at Brandeis, he enrolled in Boston University’s Creative Writing Program in 1991.

He chose to write in English, with his first novel, Waiting, based on his experiences as a soldier.

As he wrote, Jin continued to wrestle with the tension between exile and immigrant in himself. “I struggled to get away from China,” he said, “although eventually I realized that I would always have an emotional entanglement with the old land. I couldn’t get away from my past completely, but I saw that I could use it as a source of energy.”

Jin also questioned the function of art in society. His background as a member of the Chinese military and the son of a factory worker had instilled in him the idea that art for its own sake had no value. “But I came to see that things which aren’t useful can still improve our lives,” he said. “Art can define our identity.”

At different stages of his career, Jin drew inspiration from European works such as Anna Karenina, Madame Bovary, and Fathers and Sons, as well as from American authors like Willa Cather and John Steinbeck.

But he recognized that whatever strength he drew from others had to be matched by a deep-seated personal belief that as long as his books were well written, someone would publish them. “A kind of madness is part of the effort to see how much you can endure,” he said. “It’s really an illusion, but you have to believe that your good work will eventually be recognized.” 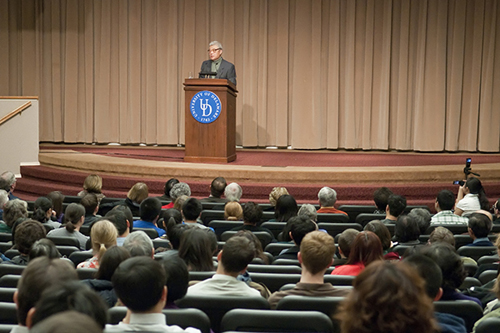 Ha Jin’s visit, which included not only the public lecture on March 7 but also readings in English and Chinese on March 8, is part of a recently developed visiting writers series, Transnational Encounters: World-Renowned Authors at the University of Delaware.

The project was made possible through a $50,000 grant from the College of Arts and Sciences’ Interdisciplinary Humanities Research Center. It aims to engage the UD community and general public with renowned writers whose works showcase rich cultural diversity. It has previously featured French writer and 2008 Nobel Laureate Jean-Marie Gustave Le Clézio.

The events have been organized and hosted by the Department of Foreign Languages and Literatures and the Confucius Institute, with additional sponsorship from the Center for Global and Area Studies, the Institute for Global Studies, and the English Language Institute.