Under California: An ancient tectonic plate

The Isabella anomaly — indications of a large mass of cool, dehydrated material about 100 kilometers beneath central California — is in fact a surviving slab of the Farallon oceanic plate. Most of the Farallon plate was driven deep into the Earth’s mantle as the Pacific and North American plates began converging about 100 million years ago, eventually coming together to form the San Andreas fault.

PROVIDENCE, R.I. [Brown University] — Large chunks of an ancient tectonic plate that slid under North America millions of years ago are still present under parts of central California and Mexico, according to new research led by Brown University geophysicists.

Around 100 million years ago, the Farallon oceanic plate lay between the converging Pacific and North American plates, which eventually came together to form the San Andreas fault. As those plates converged, much of the Farallon was subducted underneath North America and eventually sank deep into the mantle. Off the west coast of North America, the Farallon plate fragmented, leaving a few small remnants at the surface that stopped subducting and became part of the Pacific plate.

But this new research suggests that large slabs from Farallon remain attached to these unsubducted fragments. The researchers used seismic tomography and other data to show that part of the Baja region and part of central California near the Sierra Nevada mountains sit atop “fossil” slabs of the Farallon plate.

“Many had assumed that these pieces would have broken off quite close to the surface,” said Brown geophysicist Donald Forsyth, who led the research with Yun Wang, a former Brown graduate student now at the University of Alaska. “We’re suggesting that they actually broke off fairly deep, leaving these large slabs behind.” 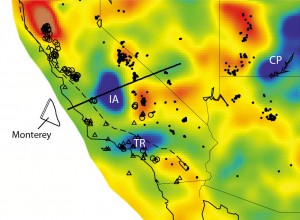 Mostly gone, not forgotten. The Isabella anomaly (IA, above), is at the same depth (ca. 100 km) as other fragments of the Farallon plate under Oregon and Washington, is on a line with fragments off the California coast, and has a similar seismic tomography signature. Image credit: Forsyth lab/Brown University (Click image to enlarge)

The findings are published in the Proceedings of the National Academy of Sciences.

Geologists had known for years about a “high velocity anomaly” in seismic tomography data near the Sierra Nevada mountains in California. Seismic tomography measures the velocity of seismic waves deep underground. The speed of the waves provides information about the composition and temperature of the subsurface. Generally, slower waves mean softer and hotter material; faster waves mean stiffer and cooler material.

The anomaly in California, known as the Isabella anomaly, indicated that a large mass of relatively cool and dehydrated material is present at a depth of 100 to 200 kilometers below the surface. Just what that mass was wasn’t known, but there were a few theories. It was often explained by a process called delamination. The crust beneath the eastern part of the mountains is thin and the mantle hot, indicating that part of the lithospheric plate under the mountains had delaminated—broken off. The anomaly, scientists thought, might be the signature of that sunken hunk of lithosphere, which would be cooler and dryer than the surrounding mantle.

But a few years ago, scientists detected a new anomaly under the Mexico’s Baja Peninsula, due east of one of the known coastal remains of the Farallon plate. Because of its proximity to the Farallon fragment, Forsyth and Wang thought it was very likely that the anomaly represented an underground extension of the fragment.

A closer look at the region showed that there are high-magnesium andesite deposits on the surface near the eastern edge of the anomaly. These kinds of deposits are volcanic rocks usually associated with the melting of oceanic crust material. Their presence suggests that the eastern edge of the anomaly represents the spots where Farallon finally gave way and broke off, sending andesites to the surface as the crust at the end of the subducted plate melted.

That led Forsyth and his colleagues to suspect that perhaps the Isabella anomaly in California might also represent a slab still connected to an unsubducted fragment of the Farallon plate. So they re-examined the tomography data along the entire West Coast. They compared the Baja and Isabella anomalies to anomalies associated with known Farallon slabs underneath Washington and Oregon.

The study found that all of the anomalies are strongest at the same depth — right around 100 kilometers. And all of them line up nearly due east of known fragments from Farallon.

“The geometry was the kicker,” Forsyth said. “The way they line up just makes sense.”

The findings could force scientists to re-examine the tectonic history of western North America, Forsyth said. In particular, it forces a rethinking of the delamination of the Sierra Nevada, which had been used to explain the Isabella anomaly.

“However the Sierra Nevada was delaminated,” Forsyth said, “it’s probably not in the way that many people had been thinking.”

His research colleague asnd co-author Brian Savage of the University of Rhode Island agrees. “This work has radically changed our understanding of the makeup of the west coast of North America,” Savage said. “It will cause a thorough rethinking of the geological history of North America and undoubtedly many other continental margins.””

The work was supported by the National Science Foundation. Other authors on the paper were Brown graduate student Christina Rau, Brown undergraduate Nina Carriero, Brandon Schmandt from the University of Oregon, and James Gaherty from Columbia University.