EAST LANSING, Mich. – To paraphrase the Rolling Stones: We can’t always get everything we want in life, but we get what we need. Michigan State University researchers believe this is a powerful principle in evolution as well. Trade-offs, which are evolutionary compromises, drive the diversity of life, said Chris Adami, MSU professor of microbiology and molecular genetics.

“Biologists have long known that when species compete for limited resources such as food, they are pressured to diversify,” he said. “But what we found through computer simulation is that trade-offs are the main driver of diversification when resources are scarce. The stronger the trade-offs, the more diversification will occur.”

However, there is price to pay when diversifying.

“Trade-offs in biology can take many forms, but in general, they imply that organisms cannot optimize all traits at the same time,” said Bjorn Ostman, post-doctoral research associate in the Adami lab.

In other words, they can’t have it all. 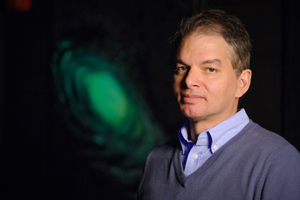 This reality is well known in the animal world. For example, in Madagascar, lemurs have evolved to eat different things, which ensures that there is enough food for all. Some lemur species eat fruit, but due to trade-offs, cannot eat leaves because their digestive tracts have become too short and cannot process the fiber.

Other lemurs have long digestive tracts and can eat leaves, but they get sick from eating fruit because it ferments from staying in their guts too long. So to preserve the supply and demand of food, a compromise evolved between fruit- and leaf-eating lemurs – they are biologically prevented from eating each other’s food.

“We did not know until now just how essential such trade-offs were in driving diversification among species,” Ostman said. “The computer simulations allowed us to remove other possible factors that influence speciation, such as geographical barriers.”

Elizabeth Ostrowski, assistant professor at the University of Houston (who was not involved in the study), said, “One of the things that is satisfying about this paper is that the authors show not only that distinct ecotypes – populations that have adapted to their specific environment – emerge and are stably maintained, but the number of distinct ecotypes increases with the severity of trade-offs. At the most extreme, there is a specialist ecotype for every different resource.”

Evolution’s story is told only by the winners, Adami said.

“Even using the fossil record, we only ever see the end products, not how the process unfolds,” he said. “By using computer simulations of evolution, we now have a better understanding of how the evolutionary story unfolds, and we can use that knowledge to understand how diversity forms, and also how to preserve it. This kind of knowledge will ultimately be important for preserving our current ecosystems.”

The study was co-authored by Randall Lin, doctoral student at the California Institute of Technology. It is published online in the journal BMC Evolutionary Biology. Ostman and Adami are both members of the BEACON Center for the Study of Evolution in Action, a National Science Foundation Science and Technology Center headquartered at MSU.