Evolution of Human ‘Super-Brain’ Tied To Development of Bipedalism, Tool-Making

Scientists seeking to understand the origin of the human mind may want to look to honeybees — not ancestral apes — for at least some of the answers, according to a University of Colorado Boulder archaeologist.

CU-Boulder Research Associate John Hoffecker said there is abundant fossil and archaeological evidence for the evolution of the human mind, including its unique power to create a potentially infinite variety of thoughts expressed in the form of sentences, art and technologies. He attributes the evolving power of the mind to the formation of what he calls the “super-brain,” or collective mind, an event that took place in Africa no later than 75,000 years ago.

An internationally known archaeologist who has worked at sites in Europe and the Arctic, Hoffecker said the formation of the super-brain was a consequence of a rare ability to share complex thoughts among individual brains. Among other creatures on Earth, the honeybee may be the best example of an organism that has mastered the trick of communicating complex information — including maps of food locations and information on potential nest sites from one brain to another — using their intricate “waggle dance.”

“Humans obviously evolved a much wider range of communication tools to express their thoughts, the most important being language,” said Hoffecker, a fellow at CU’s Institute of Arctic and Alpine Research. “Individual human brains within social groups became integrated into a neurologic Internet of sorts, giving birth to the mind.” 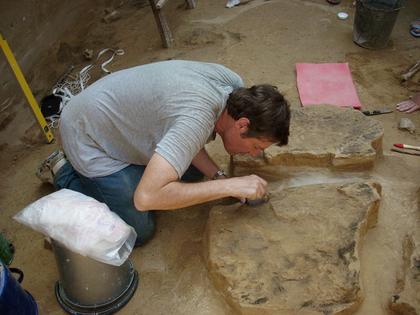 CU-Boulder researcher John Hoffecker, shown here working at a site in Russia dating back 45,000 years, believes there is mounting archaeological evidence for the evolution of a human "super-brain" no later than 75,000 years ago that spurred a modern capacity for novelty and invention. Image courtesy Vance T. Holliday/ University of Arizona

While anatomical fossil evidence for the capability of speech is controversial, the archaeological discoveries of symbols coincides with a creative explosion in the making of many kinds of artifacts. Abstract designs scratched on mineral pigment show up in Africa about 75,000 years ago and are widely accepted by archaeologists as evidence for symbolism and language. “From this point onward there is a growing variety of new types of artifacts that indicates a thoroughly modern capacity for novelty and invention.”

The roots of the mind and the super-brain lie deep in our past and are likely tied to fundamental aspects of our evolution like bipedalism and making stone tools, he said. It was from the making of tools that early humans first developed their ability to project complex thoughts or mental representations outside the individual brain — our own version of the honeybee waggle dance, Hoffecker said.

While crude stone tools crafted by human ancestors beginning about 2.5 million years ago likely were an indirect consequence of bipedalism — which freed up the hands for new functions — the first inklings of a developing super-brain likely began about 1.6 million years ago when early humans began crafting stone hand axes, thought by Hoffecker and others to be one of the first external representations of internal thought.

Ancient hand axes achieved “exalted status” as mental representations since they bear little resemblance to the natural objects they were made from — generally cobbles or rock fragments. “They reflect a design or mental template stored in the nerve cells of the brain and imposed on the rock, and they seemed to have emerged from a strong feedback relationship among the hands, eyes, brains and the tools themselves,” he said.

The emerging modern mind in Africa was marked by a three-fold increase in brain size over 3-million-year-old human ancestors like Lucy, thought by some to be the matriarch of modern humans. Humans were producing perforated shell ornaments, polished bone awls and simple geometric designs incised into lumps of red ochre by 75,000 years ago. “With the appearance of symbols and language — and the consequent integration of brains into a super-brain — the human mind seems to have taken off as a potentially unlimited creative force,” he said.

The dispersal of modern humans from Africa to Europe some 50,000 to 60,000 years ago provides a “minimum date” for the development of language, Hoffecker speculated. “Since all languages have basically the same structure, it is inconceivable to me that they could have evolved independently at different times and places.”

A 2007 study led by Hoffecker and colleagues at the Russian Academy of Sciences pinpointed the earliest evidence of modern humans in Europe dating back 45,000 years ago. Located on the Don River 250 miles south of Moscow, the multiple sites, collectively known as Kostenki, also yielded ancient bone and ivory needles complete with eyelets, showing the inhabitants tailored furs to survive the harsh winters.

The team also discovered a carved piece of mammoth ivory that appears to be the head of a small figurine dating to more than 40,000 years ago. “If that turns out to be the case, it would be the oldest piece of figurative art ever discovered,” said Hoffecker, whose research at Kostenki is funded in part by the National Science Foundation.

The finds from Kostenki illustrate the impact of the creative mind of modern humans as they spread out of Africa into places that were sometimes cold and lean in resources, Hoffecker said. “Fresh from the tropics, they adapted to ice age environments in the central plain of Russia through creative innovations in technology.”

Ancient musical instruments and figurative art discovered in caves in France and Germany date to before 30,000 years ago, he said. “Humans have the ability to imagine something in the brain that doesn’t exist and then create it,” he said. “Whether it’s a hand axe, a flute or a Chevrolet, humans are continually recombining bits of information into novel forms, and the variations are potentially infinite.”

While the concept of a human super-brain is analogous to social insects like bees and ants that collectively behave as a super-organism by gathering, processing and sharing information about their environment, there is one important difference, Hoffecker said. “Human societies are not super-organisms — they are composed of people who are for the most part unrelated, and societies filled with competing individuals and families.”

Since the emergence of the modern industrial world beginning roughly 500 years ago, creativity driven by the human super-brain has grown by leaps and bounds, from the invention of mechanical clocks to space shuttles. Powerful artificial intelligence could blur the differences between humans and computers in the coming centuries, he said.

Hoffecker is the author of an upcoming book, titled “Landscape of the Mind: Human Evolution and the Archaeology of Thought,” to be published by Columbia University Press in May. For more information on Hoffecker’s book visit cup.columbia.edu/book/978-0-231-14704-0/landscape-of-the-mind