Even Bacteria Use Social Networks

The next time your Facebook stream is filled with cat videos, think about Myxococcus xanthus.The single-cell soil bacterium also uses a social network. But forget silly distractions. M. xanthus relies on its connections to avoid getting eaten and to score its next meal.

That’s the latest insight from a team of Berkeley Lab scientists. Using several imaging techniques, they saw for the first time that M. xanthus cells are connected by a network of chain-like membranes.

The scientists believe M. xanthus uses its network to quietly transfer proteins and other molecules from one to another. This could enable the bacteria to coordinate social activities—such as evading bacterial enemies and snaring prey—without revealing its location.

“The network could be a mode of stealth communication,” says Manfred Auer of Berkeley Lab’s Life Sciences Division. “M. xanthus faces stiff competition and has a lot of enemies, so it pays to keep a low profile.” 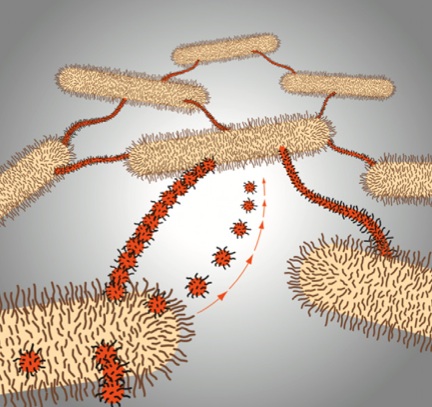 Although the research focused on M. xanthus, it could shed light on how other bacteria work together to pull off important processes, such as breaking down plant material for biofuel production or cleaning up underground toxins. It could also lead to new antibiotics that stop harmful bacteria by knocking out their communication systems.

The work is published online in the journal Environmental Microbiology.

M. xanthus is already well known for its ability to self organize. Its highly coordinated behaviors include moving as a group and encircling its favorite foods, such as E. coli. This is a big part of what makes the bacteria so successful and ubiquitous. Pick up a handful of soil, and chances are you’re holding M. xanthus.

Scientists have long known that when M. xanthus cells glom together in a stable biofilm, the area surrounding the cells is packed with spherical organelles called vesicles. Scientists believed M. xanthus secretes these vesicles to communicate with one another. They thought the vesicles drift like messages in a bottle until other M. xanthus cells chance upon them.

But Auer and colleagues found that the vesicles form a much more targeted way of keeping in touch. They used a range of imaging techniques, including 3-D focused ion beam scanning electron microscopy, to study M. xanthus in a biofilm.

They saw that the bacteria send out chains of vesicles, like pearls strung together on a necklace. Some M. xanthus cells send out tubes made of vesicles. The chains and tubes connect every cell to several other cells. It’s a microscopic intranet. 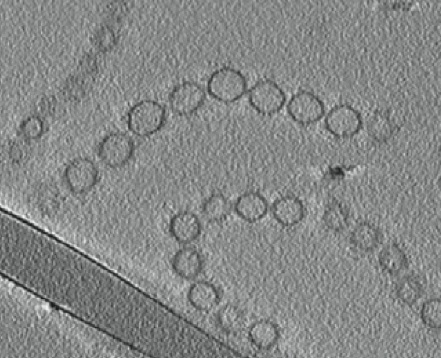 Slice-through cryo-electron tomographic reconstruction of isolated vesicle chains reveals that each vesicle chain is made up of vesicles of a similar size. The scientists found that vesicle size can vary between different vesicle chains, suggesting a tight control of vesicle chain formation. (Image credit: Auer lab)

These vesicle chains and tubes had never been seen before. In addition, previously observed connections between bacterial cells had been dismissed as artifacts of sample preparation. But the Berkeley Lab approach is almost artifact free because the samples are flash frozen before they’re imaged. And the cell-to-cell connections were seen via several imaging techniques such as cryo electron microscopy and cryo tomography.

There were more surprises. The scientists found that vesicle chains contain two proteins that are known to be transferrable from cell to cell when cells are touching. They think these proteins travel through the chains as cargo carriers. They also discovered that vesicle chain fractions have the ability to kill E. coli.

Next, the scientists want to study how the vesicle chains’ composition changes when M. xanthus interacts with foe versus food.

An extensive network of cell-to-cell connections (shown in red) is seen in this 3-D rendering of M. xanthus in a biofilm, which is imaged by focused ion beam scanning electron microscopy. (Credit: Auer lab)

This work was supported by the U.S. Department of Energy’s Office of Science.