Dolphins can recognize their old tank mates’ whistles after being separated for more than 20 years—the longest social memory ever recorded for a non-human species.

The remarkable memory feat is another indication that dolphins have a level of cognitive sophistication comparable to only a few other species, including humans, chimpanzees and elephants. Dolphins’ talent for social recognition may be even more long-lasting than facial recognition among humans, since human faces change over time, but the signature whistle that identifies a dolphin remains stable over many decades.

“This shows us an animal operating cognitively at a level that’s very consistent with human social memory,” said Jason Bruck, who conducted the study and received his PhD in June 2013 from the University of Chicago’s Department of Comparative Human Development. His study is published in the current issue of the Proceedings of the Royal Society B. 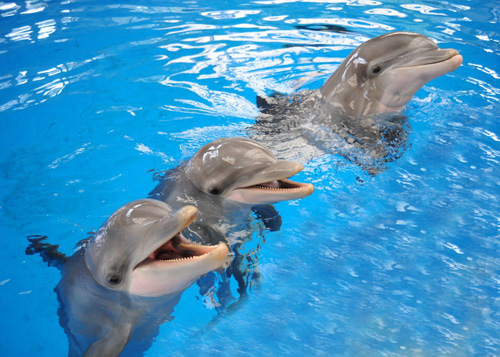 Dolphins have the longest social memory for a non-human species, according to a new UChicago study that examined more than 50 bottlenose dolphins. Jason Bruck, a UChicago postdoctoral scholar, found that dolphins could remember the signature whistles of former tank mates for more than 20 years. Photo by Jim Schulz/Chicago Zoological Society

To establish how well dolphins could remember their former companions, Bruck collected data from 53 different bottlenose dolphins at six facilities, including Brookfield Zoo near Chicago and Dolphin Quest in Bermuda. The six sites were part of a breeding consortium that has rotated dolphins and kept records on which ones lived together, going back decades.

“This is the kind of study you can only do with captive groups where you know how long the animals have been apart,” Bruck said. “To do a similar study in the wild would be almost impossible.”

In recent years, other studies have established that each dolphin develops a unique signature whistle that appears to function as a name. Researchers Vincent M. Janik and Stephanie L. King at Scotland’s University of St. Andrews reported earlier this year that a wild bottlenose dolphin can learn and repeat signatures belonging to other individuals, and answer when another dolphin mimics its unique call.

Bruck played recordings of signature whistles to dolphins that had once lived with the animals that made the calls. Determining whether the dolphins recognized their old companions required a methodical comparison of how they responded to familiar calls versus calls belonging to dolphins they had never met.

The familiar calls often would perk up the dolphins and elicit an immediate response.

“When they hear a dolphin they know, they often quickly approach the speaker playing the recording,” Bruck said. “At times they will hover around, whistle at it, try to get it to whistle back.” 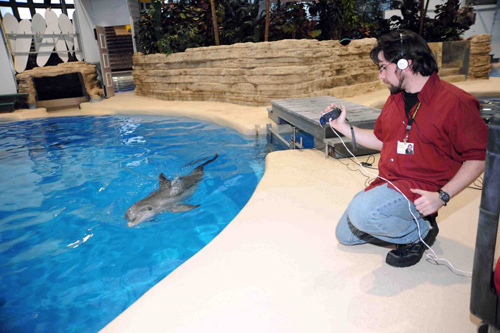 Jason Bruck, PhD’13, records video of a then-four-year-old dolphin named Allison at the Brookfield Zoo. In his study, Bruck played recordings of signature whistles to dolphins that had once lived with each other. He found that dolphins responded significantly more to whistles from animals they once knew. Photo by Jim Schulz/Chicago Zoological Society

To check that the response was the result of recognition, Bruck also would play a test recording of an unfamiliar bottlenose that was the same age and sex as the familiar animal. All the behavior was scored according to how quickly and to what degree the animals responded.

A clear pattern emerged in the data: Compared with unfamiliar calls, dolphins responded significantly more to whistles from animals they once knew, even if they had not heard the calls in decades.

An audio reunion of old companions

In one notable example, Bruck played a recording of a female dolphin named Allie, who currently lives at the Brookfield Zoo, for Bailey, a female now in Bermuda. The pair had last lived together at Dolphin Connection in the Florida Keys when Allie was 2 and Bailey was 4. But 20 years and six months after their last contact, Bailey still recognized the recording of Allie’s signature whistle.

That kind of performance after decades apart was typical, leading Bruck to conclude that dolphins maintain lifelong memories of each others’ whistles. In the wild, bottlenose dolphins have an average life expectancy of about 20 years, though longer-lived creatures can survive up to 45 years or more.

In fact, Bruck’s study appears to show the longest pure memory of any kind in a non-human species. Anecdotally, an elephant can remember a mother after 20 years, but testing animals’ long-term memories outside of family relationships requires more systematic study of multiple relationships. 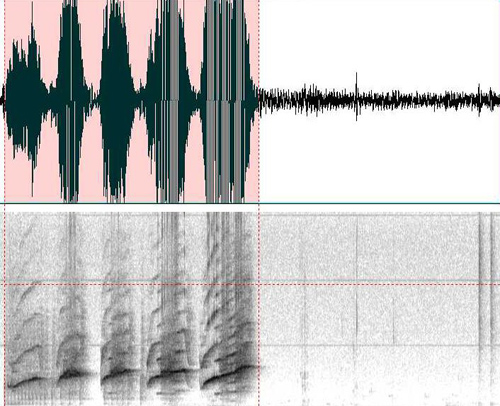 These spectrograms show the signature whistles of dolphins named Hastings and Kai. They are both three-second windows with a frequency range of 0-50 kHz. The intensity of the spectrum at the top shows the loudness of Kai’s whistle. Courtesy of Jason Bruck

Exactly why dolphins’ social memories persist so long remains unclear. Dolphins exhibit sophisticated social connections that follow a “fission-fusion” model. In the open ocean, dolphins may break apart from one group and “fuse” with other groups many times over. Such relationships could have required a growth in memory capacity. But it’s also possible that memory is just one facet of the advanced mind that evolved in dolphins for other reasons.

“Why do they need this kind of memory? I’m not sure they do,” Bruck said. “The cognitive abilities of dolphins are really well-developed, and sometimes things like this are carry-along traits. But to test whether this kind of social memory capacity is adaptive, we would need more demographic data from multiple populations in the wild to see if they experience 20-year separations.”

The emergence of advanced memory in marine mammals as well as in humans shows that in evolution, “there are lots of ways to get from point A to point B,” Bruck said. “It’s nice to see this kind of ability in a non-primate, as this is a great example of convergent evolution.” 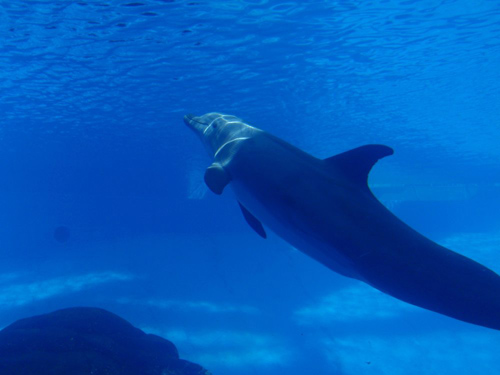 This photo, of a then-16-year-old dolphin named Kai, was taken at the Texas State Aquarium. Photo by Jason Bruck

Another big question such research raises is how similar dolphins’ signature calls are to human words and names. So far no one has been able to test what signature whistles signify in a dolphin’s mind.

“We know they use these signatures like names, but we don’t know if the name stands for something in their minds the way a person’s name does for us,” Bruck said. “We don’t know yet if the name makes a dolphin picture another dolphin in its head.”

For his next round of research, Bruck said, “That’s my goal—show whether the call evokes a representational mental image of that individual.”