Energy in, energy out

With obesity rates increasing across the globe, epidemiologists worldwide are looking for answers to questions about the factors that contribute to obesity in order to prevent it.

Amy Luke, professor at Loyola University Chicago, has explored the role of physical activity in obesity in a number of countries, including rural Ghana, Seychelles, urban South Africa, Jamaica and the United States. Luke has developed unique insights into the major drivers of the obesity epidemic by examining the patterns and intensity of physical activity across cultures where obesity and hypertension prevalence vary widely.

She shared some of her findings with an audience of more than 100 students, faculty and staff in the second annual Foltyn Family Health Sciences Seminar at the University of Delaware on Oct. 20. The lecture, which is part of the College of Health Sciences Joint Departmental Seminar Series, was held in the Health Sciences Complex Atrium at UD’s Science, Technology and Advanced Research (STAR) Campus. 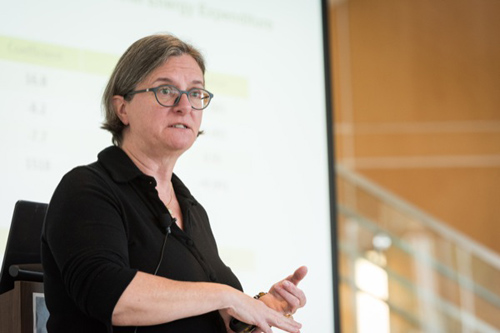 In the second annual Foltyn Family Health Sciences Seminar, Amy Luke from Loyola University Chicago shared highlights of her research on the role of physical activity in obesity across a number of cultures. Photo by Evan Krape

Luke pointed to a host of possible factors that play a role in the development of obesity, including such environmental drivers as the movement of populations from rural to urban areas, which is often accompanied by changes in both physical activity and diet. Until her study, there was little direct evidence that could be brought to bear on the question of whether the obesity epidemic has resulted primarily, or even partially, from society-wide declines in habitual physical activity.

“We want to know whether the primary driver is energy intake or energy expenditure,” she said, “because from a public health perspective, having the answer to that question will tell us what is likely to be the most effective approach to preventing population-level increases in body weight.”

Luke’s study is unique in that she objectively measured total energy expenditure using a stable isotope technique and physical activity using accelerometers in five cohorts of African origin. Much to her surprise, Luke has found that people in less-developed countries, where the obesity prevalence is low, aren’t expending significantly more energy than those in developed nations like the U.S.

“Physical activity is important for a whole host of health benefits, but it may not be as important as we thought in the prevention of obesity,” she said. “This points to the need for strong objective measures of the factors on which we’re basing public policy.”

Luke’s work has led her to the preliminary conclusion that it’s not physical activity but rather the other side of the energy balance equation — that is, energy intake — that’s responsible for the global obesity problem.

“When you have dramatic changes in diet, with people eating more foods that are lower in nutrient density, more processed foods, you see an increase in obesity,” she said.

In fact, Luke will be collaborating with Jillian Trabulsi and Mia Papas of UD’s Department of Behavioral Health and Nutrition on the diet data from her studies.

The Foltyn Family Health Sciences Annual Lecture is made possible by the generosity of Theodore J. Foltyn and Kathi Hetrick Foltyn, both members of UD’s Class of 1981. The couple established an endowed fund in February 2013 to recruit outstanding speakers to deliver the most up-to-date, relevant information to the campus community on topics such as behavioral health, nutrition, wellness and disease prevention.