A study in Nature Communications finds that an enzyme that edits RNA may loosen the genome’s control over invasive snippets of DNA that affect how genes are expressed. In fruit flies, that newly understood mechanism appears to contribute to differences among individuals such as eye color and life span.

PROVIDENCE, R.I. [Brown University] — The story of why we are all so different goes well beyond the endless mixing and matching of DNA through breeding. A new study in the journal Nature Communications, for instance, reports a new molecular mechanism of individual variation found in fruit flies that uses components operating in a wide variety of species, including humans.

The new mechanism is based in a surprising genetic oddity. Nearly all genomes — those of humans, fruit flies, and even corn and rice — are constantly grappling with parasitic snippets of genetic material called “transposons.” These snippets copy themselves, move around, and embed themselves within DNA. If left unchecked, transposons can alter how genetic instructions are carried out in the body,usually for the worse, sometimes for the better. But genomes don’t leave transposons unchecked. They “look” for tell-tale double-stranded RNA associated with the transposons, chop the strands up and use the pieces to “silence” the invaders.

In the new paper, scientists show that an enzyme called ADAR, which edits RNA in humans, flies, and many other creatures, edits double-stranded RNAs. This loosens the system that keeps “Hoppel” transposons silenced in fruit flies. When transposons are silenced, it’s done by keeping them locked tight around tiny balls of material called chromatin. 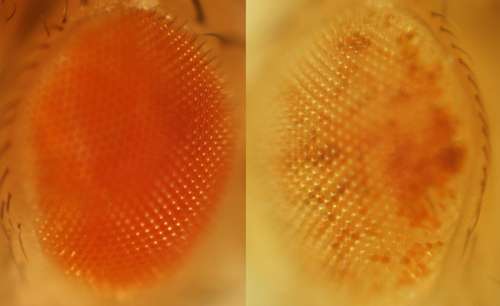 The eyes have it. Fly eye color varies based on the level of RNA editing. Red eyes, left, suggest a lot of editing, while white eyes suggest little. Image credit: Reenan lab/Brown University

Since the amount of ADAR varies from one individual to the next, the amount of jailbreaking from those chromatin prison varies too, and that should lead to altered gene expression. After showing that an abundance of ADAR reduces silencing of a common transposon in the flies — and that a lack of ADAR meant widespread silencing — the researchers measured two consequences of different levels of ADAR activity: a 20-percent difference in life span and difference in eye color (red rather than white).

The study was focused on fruit flies, ADAR, and the double-stranded RNA of the Hoppel transposon, but the ability of RNA editors to loosen the silencing of at least some transposons may be a source of individual variation in humans and other species too, said Brown University biologist Robert Reenan, senior author of the new study published online. Editing of double-stranded RNA — or a lack of editing — has already been linked to diseases in people, including amyloid lateral sclerosis and, specifically in the case of ADAR, Aicardi-Goutières syndrome.

“ADAR in humans functions the same way it does in flies, and double-stranded RNAs are made in humans the same way,” said Reenan, professor of biology in the Department of Molecular Biology, Cell Biology and Biochemistry. “They are all generic, off the shelf staples of the biological toolkit. This is not anything that is particular to flies.” 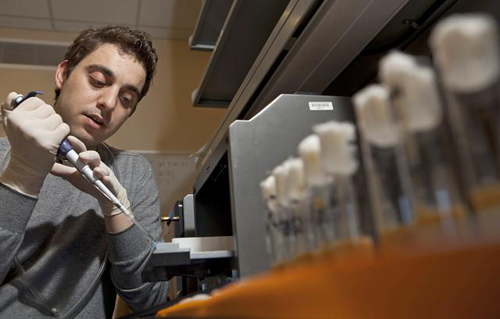 Lead author Yiannis Savva. An unintended discovery of ADAR on a site of chromosome four in fruit flies, said his thesis adviser, would be “either an artifact or … the centerpiece of your thesis.” Image credit: Brown University

Many of Reenan’s studies focus on ADAR’s editing activity in the development of the nervous system, but this investigation began years ago when lead author and then graduate student Yiannis Savva happened to overexpress ADAR in fruit fly salivary gland cells. He found some bound in an unexpected place: one specific site on chromosome four.

Reenan recalled: “I told him that’s either an artifact or it will be the centerpiece of your thesis.”

Various tests revealed that the chromosome four site was a home for several Hoppel transposons making a double-stranded RNA.

Savva and Reenan were curious about what business ADAR had with the transposon. A series of experiments in ensuing years did just that. They relocated the transposons to places where they weren’t and found that ADAR followed. They deleted the double-stranded RNA from chromosome four and found that ADAR was no longer there. They identified specific editing sites and signs of editing on the double stranded RNA.

Savva and his collaborators then measured silencing of tranposons with varying levels of ADAR and found that the more ADAR there was, the less silencing there was.

Then, working with Stephen Helfand, an expert on the biology of aging, they noticed that a reduction of editing increases life span.

“As a loss of silencing has been associated with aging in Drosophila and other organisms, we performed lifespan analyses on [low-ADAR] adults and wild-type controls and found a ~20-percent increase in the median life span of [low-ADAR] males and females,” the authors wrote in Nature Communications.

Look in their eyes

Later they looked at eye color, using natural (wild-type) flies and those where ADAR activity was either artificially hamstrung or excessively active. The natural flies have eyes that run a full continuum from red to white with various “variegating” blends in between that reflect the silencing state of their eye color gene. In the excessively ADAR-active flies there was little silencing and eyes turned out red much more often than normal. In the ADAR-hamstrug flies, virtually all of the eyes were white (reflecting a lot of silencing of the red color gene).

Ultimately, Savva said, ADAR appears to be allowing transposons like Hoppel to exercise their capacity to regulate gene expression, even though they are really just uninvited guests in the genome.

In other words, some of the differences among us may be apparent in the eyes of flies.