With the steep decline in populations of many animal species, scientists have warned that Earth is on the brink of a mass extinction like those that have occurred just five times during the past 540 million years.

Each of these “Big Five” saw three-quarters or more of all animal species go extinct.

In results of a study published in this week’s issue of journal Nature, researchers report on an assessment of where mammals and other species stand today in terms of possible extinction compared with the past 540 million years.

They find cause for hope–and alarm.

“If you look only at the critically endangered mammals–those where the risk of extinction is at least 50 percent within three of their generations–and assume that their time will run out and they will be extinct in 1,000 years, that puts us clearly outside any range of normal and tells us that we are moving into the mass extinction realm,” said Anthony Barnosky, an integrative biologist at the University of California at Berkeley, and first author of the paper.

Barnosky is also a curator in the university’s Museum of Paleontology and a research paleontologist in its Museum of Vertebrate Zoology. 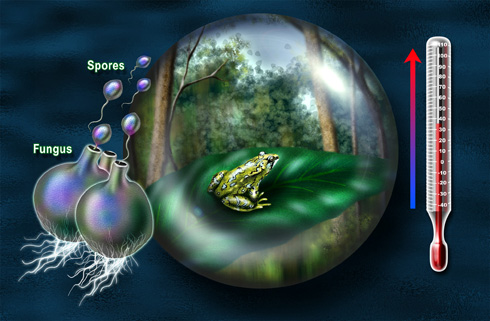 “Its continued progression, as this paper shows, could result in unforeseen–and irreversible–consequences to the environment and to humanity,” said Lane.

If currently threatened species–those officially classed as critically endangered, endangered, and vulnerable–actually went extinct, and that rate of extinction continued, the sixth mass extinction could arrive in as little as 3 to 22 centuries, according to Barnosky.

It’s not too late, he and colleagues believe, to save endangered mammals and other such species–and stop short of the tipping point.

That would require dealing with a perfect storm of threats, including habitat fragmentation, invasive species, disease and global warming. 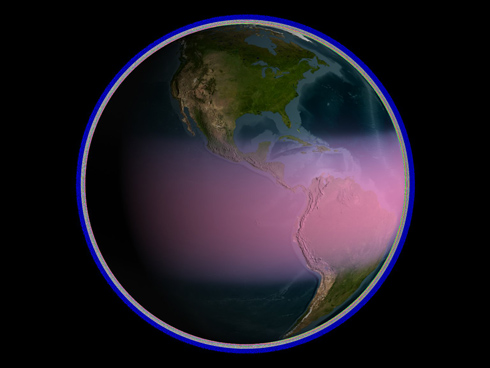 A burst of gamma rays reaching Earth may have caused an extinction 440 million years ago. Image credit: NASA

“So far, only 1 to 2 percent of all species have gone extinct in the groups we can look at clearly, so by those numbers it looks like we are not far down the road to extinction,” said Barnosky.

“We still have a lot of Earth’s biota to save.”

Co-author Charles Marshall, also an integrative biologist at UC-Berkeley and director of the university’s Museum of Paleontology, emphasized that the small number of recorded extinctions to date does not mean we are not in a crisis.

“Just because the magnitude is low compared to the biggest mass extinctions we’ve seen in half a billion years doesn’t mean they aren’t significant,” he said.

“Present rates are higher than during most past mass extinctions.”

The study originated in a seminar Barnosky organized to bring biologists and paleontologists together in an attempt to compare the extinction rate seen in the fossil record with today’s extinction record. 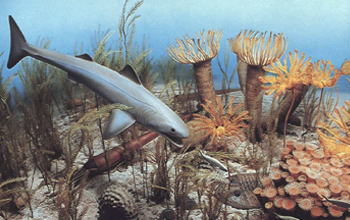 The ocean in Devonian times: is past prologue in biodiversity collapse? Image credit: University of Michigan Museum of Paleontology

In addition, the fossil record has many holes, making it impossible to count every species that evolved and subsequently disappeared, perhaps, scientists believe, some 99 percent of all species that have ever existed.

Dating of the fossil record also is not very precise, Marshall said.

“If we find a mass extinction, we have great difficulty determining whether it was a ‘bad weekend’ or it occurred over a decade or 10,000 years,” he said.

“But without the fossil record, we have no scale to measure the significance of the impact we’re having.”

“Instead of calculating a single death rate, we estimated the range of plausible rates for mass extinctions from the fossil record, and compared it to where we are now,” Marshall said, explaining how researchers got around this limitation.

Barnosky’s team chose mammals as a starting point because they are well-studied today and are well-represented in the fossil record going back some 65 million years.

Biologists estimate that within the past 500 years, at least 80 mammal species have gone extinct–from a starting total of 5,570 species.

After studying the list of threatened species maintained by the International Union for Conservation of Nature (IUCN), the team concluded that if all mammals now listed as critically endangered, endangered and threatened go extinct–and whether that takes several hundred years or a thousand years–the Earth will be in a true mass extinction.

“Obviously there are caveats,” Barnosky said.

“What we know is based on observations from just a very few twigs plucked from an enormous number of branches that make up the tree of life.”

He urges similar studies of groups other than mammals to confirm the findings, as well as action to combat the loss of animal and plant species.

“Our findings highlight how essential it is to save critically endangered, endangered and vulnerable species,” Barnosky said.

“With them, Earth’s biodiversity remains in pretty good shape compared to the long-term biodiversity baseline.

“If most of them die, even if their disappearance is stretched out over the next 1,000 years, the sixth mass extinction will have arrived.”