UCLA researchers have discovered that some scar-forming cells in the heart, known as fibroblasts, have the ability to become endothelial cells — the cells that form blood vessels. The finding could point the way toward a new strategy for treating people who have suffered a heart attack, because increasing the number of blood vessels in the heart boosts its ability to heal after injury.

In studies involving mice, the UCLA team also found that a drug could enhance this phenomenon and improve the repair process after a heart attack.

The research is published in the October 15 edition of the journal Nature. 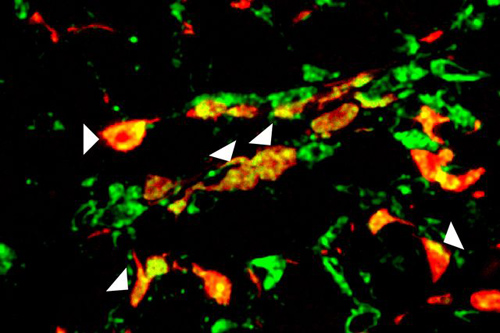 Scar-forming cells (in red) in a region of the injured heart expressing endothelial marker in green and thus appearing yellow (indicated by arrows). Image credit: UCLA

Reversing or preventing scar tissue from forming has been one of the major challenges of cardiovascular medicine, said Dr. Arjun Deb, the study’s senior author and an associate professor of medicine in the division of cardiology at the David Geffen School of Medicine at UCLA and the department of molecular, cell and developmental biology in the UCLA College.

“It is well known that increasing the number of blood vessels in the injured heart following a heart attack improves its ability to heal,” said Deb, who is also a member of UCLA’s Eli and Edythe Broad Center of Regenerative Medicine and Stem Cell Research. “And we know that scar tissue in the heart is associated with a poorer prognosis. There is compelling clinical evidence to show that if you have more scar tissue in your heart, you are worse off. 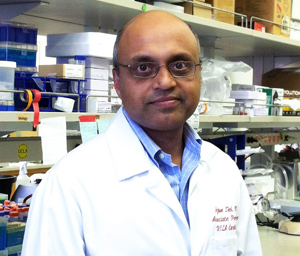 “Our findings suggest the possibility of coaxing scar-forming cells in the heart to change their identity into blood vessel-forming cells, which could potentially be a useful approach for better heart repair.”

Heart attacks remain a leading cause of death in the U.S. Each year, approximately 720,000 Americans suffer a heart attack — roughly one every 30 seconds — and about 380,000 people die from heart attacks.

Heart attacks typically are caused by a sudden blockage of the blood flow through a vessel in the heart. The portion of the heart muscle that fails to receive adequate blood dies and is replaced by non-functional scar tissue, a process known as fibrosis. Once a scar forms, it remains in the heart throughout the person’s life.

Several years ago, Deb and his colleagues were investigating the relationship between fibroblasts and blood vessel–forming cells, or endothelial cells, which exist in close proximity in the injured heart. Through experiments in mice in which scar-forming cells in the heart were genetically labeled, the researchers discovered that many of the fibroblasts in the heart’s injured region changed into endothelial cells and contributed directly to blood vessel formation — a phenomenon they called mesenchymal-endothelial transition, or MEndoT.

The researchers identified a molecular mechanism that regulated MEndoT and found that administering a small molecule to augment MEndoT led to less scarring and allowed the heart to heal more completely. They plan to test similar small molecules in other models to determine whether the strategy could potentially be used to benefit humans.

“There are remarkable similarities in the process of scarring in different organs after injury,” Deb said. “Our hope is that this approach can be used to treat scar tissue in other organs as well.”

The study was supported by a grant from the National Institutes of Health (R01HL102190).