‘Digging’ for color: The search for Egyptian Blue in ancient reliefs

Bright colors are a rare sight in the Yale University Art Gallery (YUAG) ancient sculpture hall. The gallery’s now-white objects were once brightly painted, their brilliant colors having faded or been destroyed over time. A team of Yale researchers is now working in the museum’s ancient galleries to map one of the long-lost pigments — Egyptian Blue — on two reliefs from ancient Assyria.

The team — Jens Stenger, conservation scientist at the Institute for the Preservation of Cultural Heritage; Carol Snow, deputy chief conservator and the Alan J. Dworsky Senior Conservator of Objects at YUAG; and Shiyanthi Thavapalan ’11 M.A., a third-year doctoral student in Assyriology — are using state-of-the-art technology from Yale’s West Campus to explore the two-dimensional carvings.

Although Egyptian Blue is no longer visible to the naked eye on the reliefs, a technique called visible-induced luminescence imaging allows Stenger to detect where Egyptian Blue was used.

Stenger shines both LED lights and a digital projector onto the reliefs. When these lights interact with one of the chemical components of Egyptian Blue, infrared light is emitted from that portion of the relief. Stenger detects this interaction with a modified DSLR camera. The resulting images show bright white spots where Egyptian Blue was used.

A color similar to blue turquoise, Egyptian Blue is considered to be one of the first synthetic pigments and dates back to 2,500 B.C.E.

“Blue was an important color at the time,” said Thavapalan, who is attempting to gain a better idea of color conceptualization in ancient Mesopotamia. Blue was prized in ancient Assyria since there were not a lot of natural resources to produce the color, she notes. “Having such a prestigious color in the palace would have presented an image of wealth and power to visiting dignitaries.” 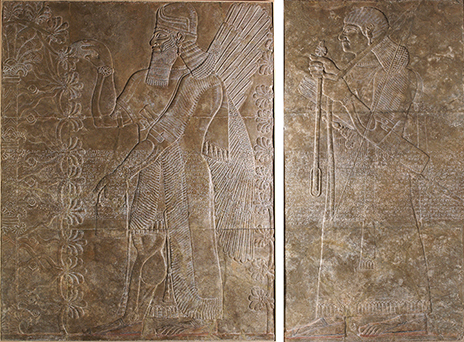 The two carvings on display are part of a collection of six reliefs at Yale that originated from Assurnasirpal II’s palace in Kalhu near the Tigris River. One of the two reliefs depicts a human attendant, likely a eunuch, carrying a bow, arrows, and a mace. The second relief depicts a human-headed genie watering a sacred tree.

Over the course of a few days, the team was able to capture detailed images of both reliefs. “It is kind of like an archaeological dig,” explained Stenger, “You look everywhere and sometimes you find something; sometimes you don’t.”

The team was surprised to find Egyptian Blue in several places on the reliefs, including the eye of the eunuch and the beard of the genie, where it was likely mixed with black or white paint to add cooler tones.

“Blue is an illustrious color and beards were a sign of masculinity, so it makes sense that the king has a big black beard with blue mixed in,” explains Thavapalan. 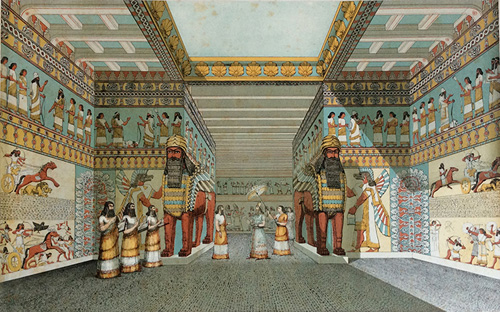 This research is helping Thavapalan to serve as an emotional and psychological interpreter of ancient material culture. Her doctoral work also investigates texts describing colors in ancient Mesopotamia. She hopes to correlate the symbolic associations between colors in art and texts to understand Mesopotamian conceptualizations of color.

Thavapalan said she was thrilled to find pigment in order to make these connections. “The paint was so badly preserved, I was surprised to find any blue.”

Snow explained how paint was often scraped off from reliefs when excavated by archaeologists in order to get a better view of the actual cuneiform inscription.

Egyptian Blue is not the only thing that this Yale team has discovered on the reliefs.  Visible-induced luminescence imaging also revealed previous restoration and preservation attempts, including epoxy used to glue broken pieces back together and wax used on the beard of one figure.

“The imaging we are doing is completely non-invasive,” said Snow. From a conservation standpoint, this method is ideal, she adds, since it has revealed a wealth of information about both the original state of the reliefs without inducing more damage. Snow says she hopes that non-invasive analysis methods like these become more common and serve as a model for future archaeologists.