Developers Tune In to Microsoft’s Channel 9

*Channel 9 has been broadcasting from inside Microsoft’s labs and offices since 2004, giving a large community of developers an insider’s view of the people behind the company’s products and technologies.*

REDMOND, Wash – Passengers on United Airlines flights have long turned their in-flight entertainment dials to Channel 9 to hear what’s happening in the cockpit. For more than seven years, developers have had a similar opportunity to get inside the mind of Microsoft.

Microsoft’s Channel 9 – named for United’s cockpit channel – has been broadcasting since 2004 from inside the company’s offices and labs. Be it quirky Halloween videos that get hundreds of thousands of hits or hour-long interviews with the company’s most talented engineers, Channel 9 pulls back the curtain at Microsoft to reveal its human side.

From the moment Channel 9 went live in April 2004, developers worldwide have embraced the often offbeat outlet. Today the site attracts more than six million visitors per month, with videos routinely getting thousands of views and sparking pages of comments. And while times have certainly changed since 2004 – Twitter and YouTube didn’t exist yet – the Channel 9 mission remains the same, said Jeff Sandquist, senior director of Channel 9.

“Channel 9 showcases the people behind our products,” he said. “We’re just trying to create a place where developers want to hang out, learn from the people at Microsoft, and hopefully have a lot of fun while they do it.” 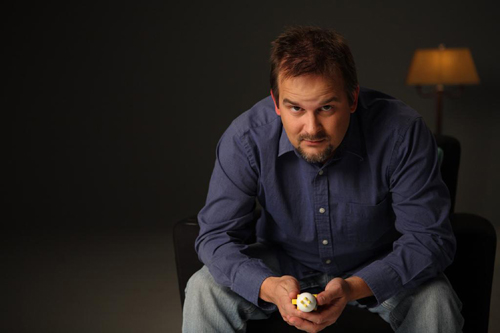 Channel 9 tries "to create a place where developers want to hang out, learn from the people at Microsoft, and hopefully have a lot of fun while they do it," said Jeff Sandquist, senior director of Channel 9. Image credit: Microsoft

Fun is a big part of a Channel 9 broadcaster’s job, said Laura Foy, senior technical evangelist for Channel 9 and one of its roving reporters. Foy is known for her flair and is the driving force behind the annual Halloween videos and occasional music video spoofs such as “Bringing Xbox Back.” She devotes the bulk of her content at getting developers excited about the Windows Phone platform.

Foy said that Channel 9’s primary mission is to trigger an open discussion between developers and key players at Microsoft. She thinks her approach helps show off the fun side of Microsoft, which is still sometimes seen as a stiff corporation.

“One of the things that I want to try and do is show that we have a sense of humor, show we’re fun, and at the same time show off all the amazing stuff that Microsoft is doing, whether in the labs of Microsoft Research or in the Garage or what the internal community is doing with Kinect,” she said. “Hopefully developers will see that and get excited by the possibilities and want to develop cool stuff for our phones, for Kinect, and for our platform.”

It all began in 2003 after the Professional Developers Conference (PDC), an annual event where Microsoft aims to connect with developers and show where its platform is headed. Sandquist worked in the Developer and Platform Evangelist (DPE) group and was in charge of community strategy at the time. Blogging was just taking off then, and every night Sandquist would go back to his hotel room to check out what people were saying about the event. 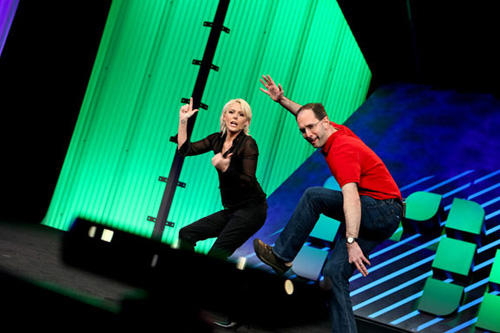 Fun is a big part of a Channel 9 broadcaster's job, according to Laura Foy, senior technical evangelist for Channel 9 and one of its roving reporters. Foy is shown here demoing "Wall Panic 3000" on Kinect with Corporate Vice President Scott Guthrie at MIX11. Image credit: Microsoft

One theme kept coming up, he remembered. “People would write, ‘I just ran into so and so at Windows or Visual Studios, and we got to talking about what it means to work at Microsoft and what challenges they faced. You know what? I realized that person is a geek, just like me,’” Sandquist said.

He loved that reaction, though he thought it ironic people were surprised employees at the world’s largest software company enjoyed building software. “So we said, ‘Gee, imagine if we could have an event like that every day? How would it change things to be able to have that conversation with customers every day?’”

Since 2004, Microsoft’s Channel 9 has been broadcasting from inside the company's offices and lab to give developers get a sense of where the Microsoft platform is headed. Image credit: Microsoft

They laughed, and then went back to their day jobs. But the idea kept nagging at Sandquist, who brought it up with his manager. He gave Sandquist the green light, and also helped supply the team with its name. Sandquist’s boss had a terrible fear of flying and refused to board a plane until a United Airlines pilot told him about Channel 9. Once he understood what was happening in the cockpit – and that pilots don’t freak out every time they hit turbulence – he overcame his fear. He also decided Microsoft developers would love their own Channel 9 to eavesdrop on the company’s direction.

He was right. At the time, Microsoft was seen by many developers as an inscrutable, insular giant, and Sandquist and his team pushed for greater transparency. They received support inside DPE and beyond; Bill Gates himself had a TV outside his office that streamed Channel 9 all day long.

When they launched in April 2004, expectations weren’t sky high, Sandquist admitted. “Then all of a sudden we had 20,000 people on the site, and we were being picked up by the New York Times and the Wall Street Journal,” he said. “We just grew from there.”

He still remembers their first stories, which focused on Bill Hill, a typesetter who worked on Word. In one of the interviews, Hill explained why people in the computer era only need to use one space after a period – something Sandquist still thinks about every time he writes an email.

Since then, the Channel 9 formula has evolved – they still pick up a video camera and go talk to some brilliant engineers but those “classic” style videos are paired with broadcast quality productions that scale to large audiences. The emergence of new social platforms has also helped extend their reach. For example, today Channel 9 Live allows people watching live events ask questions of Microsoft executives, developers and partners via Twitter. The Channel 9 team also has a series called “Coding4Fun”, where they create and open source code for hardware projects, like a Kinect-enabled Turret that blasts office intruders with a Nerf gun.

Despite all the fun, the team takes its mission seriously. “Software developers have put their livelihood in our hands,” Sandquist said. “It is an amazing responsibility of what we have to do as a platform company. And Channel 9 is all about having that right communications with developers and explaining where we’re headed in the future.”