A three-year series of research flights from the Arctic to the Antarctic has successfully produced an unprecedented portrait of greenhouse gases and particles in the atmosphere.

The far-reaching field project, known as HIPPO, ends this week, and has enabled researchers to generate the first detailed mapping of the global distribution of gases and particles that affect Earth’s climate.

HIPPO, which stands for HIAPER Pole-to-Pole Observations, has brought together scientists from organizations across the nation, including the National Center for Atmospheric Research (NCAR), Harvard University, the National Oceanic and Atmospheric Administration (NOAA), Scripps Institution of Oceanography, the University of Miami and Princeton University.

The National Science Foundation (NSF), which is NCAR’s sponsor, and NOAA are funding the project.

The HIPPO campaign relies on the capabilities of a specially equipped Gulfstream V aircraft, owned by NSF and operated by NCAR in Boulder, Colo.

The research jet, known as the High-performance Instrumented Airborne Platform for Environmental Research (HIAPER), has a range of about 7,000 miles (11,000 kilometers). 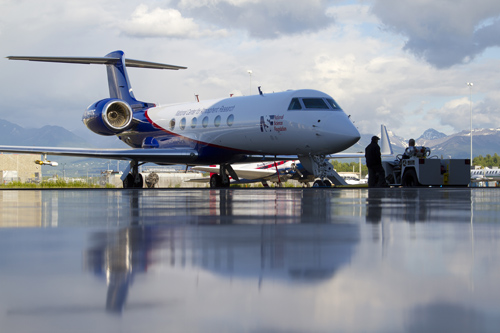 It is outfitted with a suite of specially designed instruments to sample a broad range of atmospheric constituents.

“This has been the most ambitious project to date for the NSF Gulfstream V aircraft, or HIAPER,” says Anne-Marie Schmoltner, NSF program director for atmospheric chemistry, which funded HIPPO. “It has produced an unprecedented wealth of data on greenhouse gases and black carbon particles throughout the atmosphere.”

The series of HIPPO flights marks an important milestone as scientists work toward targeting both the sources of greenhouse gases and the natural processes that draw the gases back out of the atmosphere. 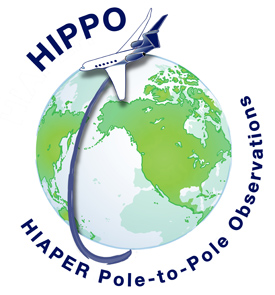 “With HIPPO, we now have views of whole slices of the atmosphere,” says Steven Wofsy, HIPPO principal investigator and atmospheric scientist at Harvard University. “We’ve been quite surprised by the abundance of certain atmospheric components and the locations where they are most common.”

The flights have helped scientists compile extraordinary detail about the atmosphere.

The research team has studied air samples at different latitudes during various seasons from altitudes of 500 feet (150 meters) above Earth’s surface up to as high as 45,000 feet (13,750 meters), into the lower stratosphere.

“Tracking carbon dioxide and other gases with only surface measurements has been like snorkeling with a really foggy mask,” says Britton Stephens, a scientist with NCAR and one of the project’s principal investigators. “Finally, HIPPO is giving us a clear view of what’s really out there.”

The first of the five HIPPO missions began in January, 2009. Two subsequent missions were launched in 2010, and two in 2011.

The final mission comes to an end on September 9, 2011, as the aircraft returns from the Arctic to Anchorage and then to its home base at NCAR’s Research Aviation Facility near Boulder, Colo.

Each of the missions took the research team from Colorado to Alaska and the Arctic Circle, then south over the Pacific to New Zealand and near Antarctica.

The flights took place at different times of year, resulting in a range of seasonal snapshots of concentrations of greenhouse gases. 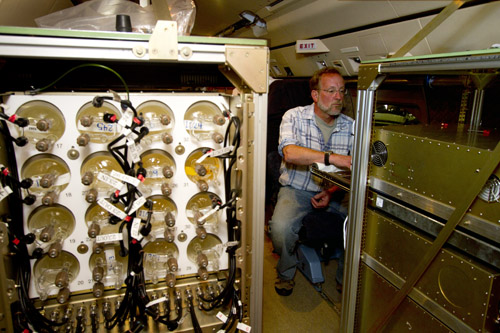 The research was designed to help answer such questions as why atmospheric levels of methane, a potent greenhouse gas, have tripled since the Industrial Age and are on the rise again after leveling off in the 1990s.

Scientists also studied how logging and regrowth in northern boreal forests and tropical rain forests are affecting levels of carbon dioxide in the atmosphere. Such research will provide a baseline against which to evaluate the success of efforts to curb carbon dioxide emissions and to enhance natural carbon dioxide uptake and storage.

The team measured a total of more than 80 gases and particles in the atmosphere.

One of HIPPO’s most significant accomplishments has been quantifying the seasonal amounts of carbon dioxide taken up and released by land plants and the oceans.

These measurements will help scientists produce more accurate estimates of the annual cycle of carbon dioxide in and out of the atmosphere, and how the increasing amount of this gas is influenced by both the natural world and society.

Such particles can affect climate in various ways, such as directly absorbing solar radiation, influencing the formation of clouds or enhancing melt rates when they are deposited on ice or snow.

“What we didn’t anticipate were the very high levels of black carbon we observed in plumes of air sweeping over the central Pacific toward the U.S. West Coast,” says NOAA scientist Ryan Spackman, a member of the HIPPO research team.

“Levels were comparable with those measured in megacities such as Houston or Los Angeles. This suggests that Western Pacific sources of black carbon are significant, and that atmospheric transport of the material is efficient.”

Researchers were also surprised to find larger-than-expected concentrations of nitrous oxide high in the tropical atmosphere.

The finding has significant environmental implications because the gas both traps heat and contributes to the thinning of the ozone layer.

Nitrous oxide levels have been increasing for decades in part because of the intensive use of nitrogen fertilizer for agriculture.

The abundance of the gas high in the tropical atmosphere may be a sign that storms carry it aloft from sources in Southeast Asia.

The task of understanding how carbon cycles through the Earth system, known as “balancing the carbon budget,” is gaining urgency as policy-makers discuss strategies to limit greenhouse gases.

Some countries or regions could be rewarded with carbon credits for taking steps such as preserving forests believed to absorb carbon dioxide.

“Carbon markets and emission offset projects are moving ahead, but we still have imperfect knowledge of where human-emitted carbon dioxide is ending up,” Stephens says.

Before HIPPO, scientists primarily used ground stations to determine the distribution of sources of atmospheric carbon dioxide and “sinks” that reabsorb some of the gas back into the land and oceans.

But ground stations can be separated by thousands of miles, which hinders the ability to measure carbon dioxide in specific locations.

To estimate how the gas is distributed vertically, scientists rely on computer models, which will now be improved with HIPPO data.