Billions of trees killed in the wake of mountain pine beetle infestations, ranging from Mexico to Alaska, have not resulted in a large spike in carbon dioxide released into the atmosphere, contrary to predictions, a UA-led study has found.

Across the world, trees are dying in increasing numbers, most likely in the wake of a climate changing toward drier and warmer conditions, scientists suspect. In western North America, outbreaks of mountain pine beetles (Dendroctonus ponderosae) have killed billions of trees from Mexico to Alaska over the last decade.

Given that large forested areas play crucial roles in taking carbon dioxide out of the atmosphere through photosynthesis and turning it into biomass, an important question is what happens to that stored carbon when large numbers of trees die.

Vast swaths of forest are succumbing to pine beetle outbreaks. (Photo by: David Moore/UA School of Natural Resources and the Environment)

“The general expectation we had was that when trees die on a large scale, it would lead to a big pulse of carbon into the atmosphere through microorganisms metabolizing all that dead wood,” said David Moore, an assistant professor in the School of Natural Resources and the Environment in the UA College of Agriculture and Life Sciences and one of the lead authors of the study, which is published online in the journal Ecology Letters.

“A question we are looking to answer is, ‘How does the carbon dioxide released from the forest into the atmosphere change as you have large scale tree mortality over time?”’ said second lead author Nicole Trahan, a postdoctoral researcher at the University of Colorado, Boulder.

According to co-author Russell Monson, who is the Louise Foucar Marshall Professor in the UA School of Natural Resources and the Environment, forests affect the carbon budget of the atmosphere through two dominant processes: photosynthesis, by which plants take carbon dioxide out of the atmosphere and lock it up in organic compounds, and respiration, by which plants and soil microbes release carbon dioxide back into the atmosphere. The balance of these processes determines whether a particular forest is a carbon source or a carbon sink.

After a massive tree die-off, conventional wisdom has it that a forest would go from carbon sink to carbon source: Since the soil microbes are still around, they are expected to release large amounts of the greenhouse gas carbon dioxide into the atmosphere, where it is thought to accelerate climate change.

“Surprisingly, we couldn’t find a big pulse,” said Moore, who is also a member of the UA Institute of the Environment.

Trahan added: “In the first few years after beetles have come in and killed trees, the carbon release from the surrounding soil actually goes down.” 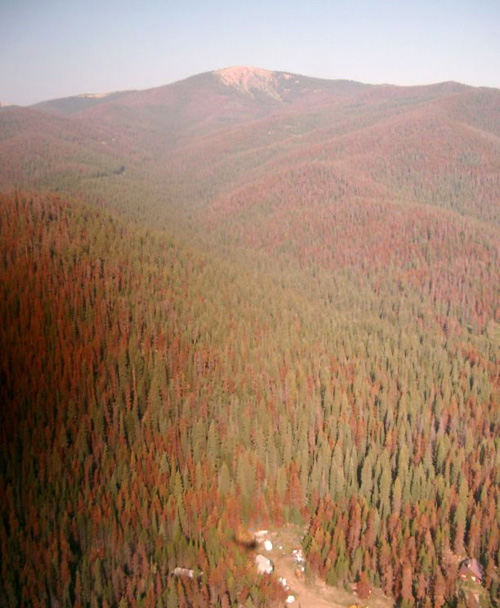 Large amounts of dead trees, it turns out, hold on to their carbon for a long time and prevent it from quickly being released into the soil or the atmosphere. According to Moore, this might be due to several reasons: First, while trees take up carbon dioxide during the day during photosynthesis, they release some of it at night when they switch to respiration.

“Once the trees are dead, respiration by the trees goes away,” Moore said. “In addition, if you cut off the carbon that a tree put into the soil while it was alive, you reduce the ability of the soil microbes around the roots to respire.”

“After five or six years, there is a buildup of some dead plant material, leaf litter and so on, and that seems to drive the rate of respiration up again. But it never recovers to the point it was before the beetles killed the trees, at least over the span of a decade,” Moore said.

Finally, the trees studied in this project grow at higher elevations, where cooler temperatures slow the decomposition process and thereby carbon-releasing respiration.

“Overall, we discovered that after a tree die-off, the loss of carbon in the soil results less from increased respiration by microbes but more from the fact that trees are no longer sequestering photosynthesized carbon into the soil,” Moore said. “There seems to be a dampening of the carbon cycle rather than a big pulse of carbon release. So even if the forest now goes from a sink to a source of carbon dioxide, it’s not as dramatic of an effect as we thought it would be.” 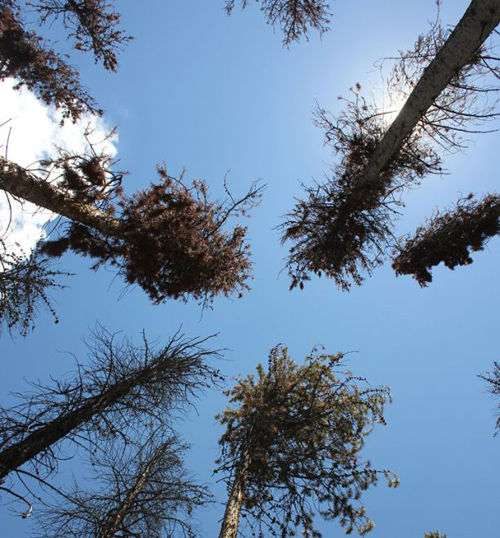 Looking up into pine trees infested with pine beetles. (Photo by: David Moore/UA School of Natural Resources and the Environment)

The large areas of high-elevation forests are some of the most important carbon sinks for Western North America, Moore said. Worldwide, plants take about 120 billion tons of carbon out of the atmosphere each year. About half of that is released again through plant respiration, while the other half is released through respiration by animals, microbes and other organisms.

According to data published by the Intergovernmental Panel of Climate Change, or IPCC, burning of fossil fuels and land use change result in an annual net addition of about 8 billion tons of carbon dioxide to the atmosphere.

“The reason we study the natural carbon cycle is because any change, even a small one, could have a large effect on our climate,” Moore said.

Outbreaks of mountain pine beetles are nothing new, Moore said.

“The beetles are a natural phenomenon, they have been there for very long time. Their populations go through periods of boom and bust. But extended drought hinders the trees ability to withstand the attacks.”

In the past, cold temperatures used to kill beetles off in the wintertime, but with temperatures on the rise, this happens less and less. Add to that a climatic trend to more and longer droughts, and you have a double whammy, Moore explained.

“Over the past two decades, it has not been very cold in the wintertime and we have experienced a succession of very dry years across the Southwest, rendering the trees more susceptible to beetles.”

“We measure the carbon dioxide coming out of the soil,” Moore explained. “At the Fraser site, we used a method to measure the CO2 as it increased during the day and decreased overnight at the bottom of the valley. We used that as a measure of how much carbon dioxide was cycled across the entire valley.”

Using a flux tower at Niwot Ridge, the team was able to measure the net uptake of carbon in the area. A flux tower monitors eddies, or pockets of air, with instruments that measure the levels of carbon dioxide and water, allowing researchers to estimate how much carbon the ecosystem is pulling in from the atmosphere versus how much water and carbon it is losing.

To put the data into a broader context, Moore and his colleagues compared the fluxes measured at Niwot Ridge to measurements obtained by NASA’s Moderate Resolution Imaging Spectroradiometer aboard the Terra and Aqua Satellites. NASA provides a global dataset by measuring the amount of green vegetation and the temperatures on the Earth’s surface.

“Those datasets are very good on a global level but less so for a given local area,” Moore said. “Therefore, we used flux tower data to validate the NASA product for our region.”

At Fraser Experimental Forest and the Niwot Ridge sites, the team took advantage of a sequence of trees in which time of death had been documented.

“This gives us a timeline of almost a decade where we know what happened to those trees,” Trahan said. “We know when they died, and we can follow what happens to the carbon in the system.”

“As long as a tree is alive, it puts much of the carbon it fixes from the atmosphere underground to support its roots and associated microorganisms,” Trahan explained. “When the tree dies, that carbon flow is shut off, and the release of carbon into the soil and the atmosphere goes down, leading to the observed dampening effect on the carbon cycle: As trees die, less carbon is taken up from the atmosphere, but less is released from the soil as well.”

The data obtained in studies like this one can be used to inform models that help scientists predict how ecosystems will respond to these disturbances in the future.